Suresh and I have blogged about these issues before but this post will put another spin on the information, as it applies to BIG DATA .

I ran into a 665 issue with a customer attempting to BCP data out of a database.  The scenario was that it worked if one instance of BCP was running but if they started a second instance of BCP, at the same time,  (using where clause to divide the table and queryout parameter) the BCP(s) would fail with the following error.

After reproducing it in the lab and debugging it I found the problem to be the file system limitation (FILE SYSTEM LIMITATION = 665) during the WriteFile call. (I did file work items with the SQL Server development team to surface more error details so we don't have to troubleshoot with the debugger in the future.)

Tracking down the source of the problem it was the physical, disk cluster allocations and the way NTFS tracks allocations for an individual file.   I highly recommend you read the following post, it describes the NTFS behavior really nicely: http://blogs.technet.com/b/askcore/archive/2009/10/16/the-four-stages-of-ntfs-file-growth.aspx ...

To summarize, when you are at the maximum allocation state for a single NTFS file you have a MTF allocation (1K) for the Attribute List Entries that points to ## of Child records (1K allocations) holding information about the starting physical cluster and how many contiguous clusters are allocated for that segment of the file.  The more of these you have the more fragmented the file becomes. 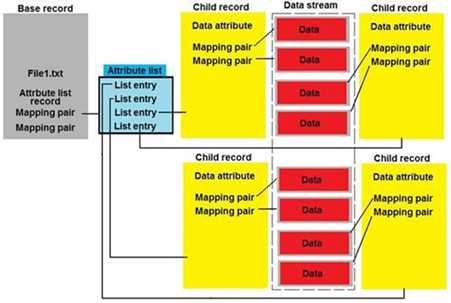 A nice example I found was the following.

The cluster size and MTF sizes determine the maximum size an NTFS file can accommodate.  The following articles highlight these options and limitations.

In the BCP scenario the customer had determined that running 6 instances of BCP on this target system maximized the rows per second transferred.   However, the more instances of BCP they enabled the faster they encountered the file system limitation.   As you can see the more allocations taking place on the same disk/LUN raises the fragmentation level chances and internally puts pressure in the mapping pair space.

Making it a bit more pronounced is that BCP uses a 4K buffer for its writes.  It fills the buffer, writes it and repeats.  When on a system that uses 4K clusters this aligns well but it allows 4K osculation of clusters between multiple copies to the same physical media.

Here are a few suggestions for handling Big Data.

Using Contig.exe from sysinternals ( http://technet.microsoft.com/en-us/sysinternals/bb897428.aspx ) and the -a parameter you can view the number of fragments used by a given file.