Over the years the SQL Server scheduling algorithms have been documented in various publications.  Specifically, ‘ The Guru’s Guide to SQL Server Architecture and Internals’ has a chapter, written by the scheduler developer (Sameer) and Ken; and I reviewed the technical content, covering the details.

This post outlines a few of the changes that were made in SQL Server 2012.  The post is not intended to cover all the nuances(there are far too many), instead I will be highlighting a portion of the new algorithm so you understand the SQL Server behavior.  I also take several liberties with the description of the algorithm so this post does not turn into a whitepaper.

The task assignment boundary is when the client submits a new command (Batch, RPC, etc…)  The associated task in SQL Server is assigned to a scheduler and the task remains associated with the scheduler for the lifetime of the command (until the batch completes.)

Out of the gate, SQL Server 2012 does not make any changes.  What - Why did I write the blog?  Am I just wasting your time?   No, I say this because all SKUs other then Enterprise Edition use the same, fundamental logic that was introduced in SQL Server 7.0 (UMS scheduling) and as described above.  The EE SKU has been updated to further accommodate CPU resource governance .   If, and only if, you are running the SQL Server Enterprise Edition SKU do these new changes apply.

New Connection Assignments: Assigned round-robin to the nodes.  1st to Node 1, 2nd to Node 2, 3rd to Node 1 and so forth.   The core algorithms for connection assignment remains the same in SQL Server 2012, all SKUs.   As you can see from the diagram Port 1433 is bound to both NUMA nodes so the round-robin will occur between nodes.   The load of the schedulers within the target node is queried and the new connection is assigned to the scheduler with the least load .   This scheduler becomes the preferred scheduler for the life of the connection. 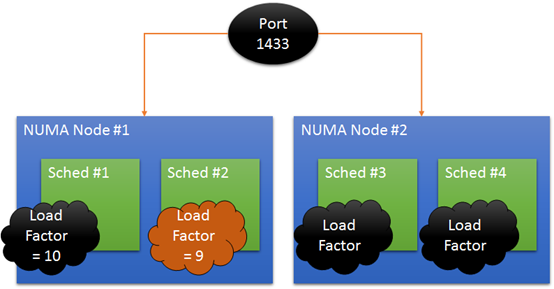 Least Load – After Connection Made and Preferred Scheduler Assigned

In this example the new batch arrives.  The preferred scheduler is Scheduler #2 but the load factor has increased to 13 with is > 120% of 10.  So the batch would be assigned to Scheduler #1 because it is deemed to have less load and is likely to provide more CPU resources for the task. 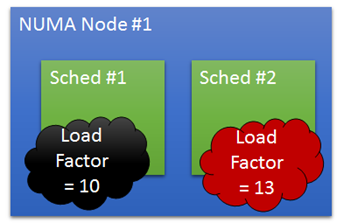 Starting with SQL Server 2012 EE SKU the behavior changes for a new task  (Batch, RPC, Disconnect, …) only after the connection has been established and pool assignment made.   ( No connection no preferred scheduler yet! )

Note: Even if the RG is disabled the DEFAULT pool is used internally.

The process of assigning a new task to a specific scheduler is where the SQL Server 2012 EE SKU logic was upgraded from the basic, load factor algorithm.  The idea is to find a scheduler that can provide the best scheduler, CPU capacity for the pool the connection is assigned to, within the same NUMA node while minimizing the overall, scheduler assignment randomization. 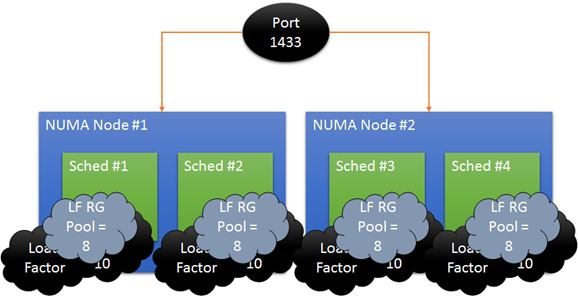 Let’s do a mathematical example to show this in action, at a high level.

Note: The math included here is to show the basics and is not the exact algorithm.

Now, assume I have a new task to assign and the preferred scheduler is Scheduler #1.   SQL Server 2012 EE SKU uses the current average and increased resource usage to help determine the assignment.

80th percentile average = 4.5008   ( Average resource units a task within the same pool achieves across all schedulers of the same node .)

Adding another task, to the same pool on Scheduler #1 does not drop the average below the 80th percentile for the entire NUMA node.  The assignment of this request will still occur on Scheduler #1.

The adjusted load would then become the following.

Overall the assignments of 2 new tasks within the same resource pool and NUMA node did not cause the targeted resources for the pool to vary significantly and maintained the goal of scheduler assignment locality and reduced movement.

TRACE FLAGS USE WITH CAUTION

I considered not documenting the trace flags as I have never seen us use them for a production system.  There are some trace flags to control the behavior.   As always, these are not intended for extended use and should only be used under the guidance of Microsoft SQL Server support.  Because these change the task assignment algorithm they can impact the concurrency and performance of your system.

-T8008 - Force the scheduler hint to be ignored.  Always assign to the scheduler with the least load (pool based on SQL 2012 EE SKU or Load Factor for previous versions and SKUs.)

-T8016 - Force load balancing to be ignored.  Always assign to the preferred scheduler.