Turn on suggestions
Auto-suggest helps you quickly narrow down your search results by suggesting possible matches as you type.
Showing results for
Show  only  | Search instead for
Did you mean:
Does statistics update cause a recompile?
By

Does statistics update cause a recompile?


This my “statistics series” blog.   See “Statistics blogs reference” at end of this blog.

If I were to ask you a question “Does statistics update cause recompile for a query referencing the table?”,  what would your answer be?  In most cases, the answer is YES!  However there are a couple of scenarios where recompile is not necessary.   In other words, a query won’t recompile even you have updated statistics for the tables being accessed.  We actually got users who called in and inquired about the behaviors from time to time.

When a plan is trivial, it’s unnecessary to recompile the query even statistics has been updated.  Optimizer generates trivial plan for very simple queries (usually referencing a single table).  In XML plan, you will see statementOptmLevel="TRIVIAL". In such case, it’s futile and you won't get a better or different plan.

Let’s see this in action.  In the script below, I created a table and two procedures (p_test1 and p_test2).  p_test1 has a very simple statement.   I execute them once so that the plans will be cached.  Then one row is inserted (this is very important as it will be explained in the 2nd scenario).  Statistics then is updated.

Note that only the statement from p_test2 produced StmtRecompile event.   This is because the statement in p_test1 produced a trivial plan.  Recompile would be futile anyways.

In this scenario, the plan can be non-trivial plan but it still won’t recompile if the table whose statistics was updated hasn’t got any row modification(insert,delete and update) since last statistics update.

Let’s use the same demo above to illustrate the behavior. 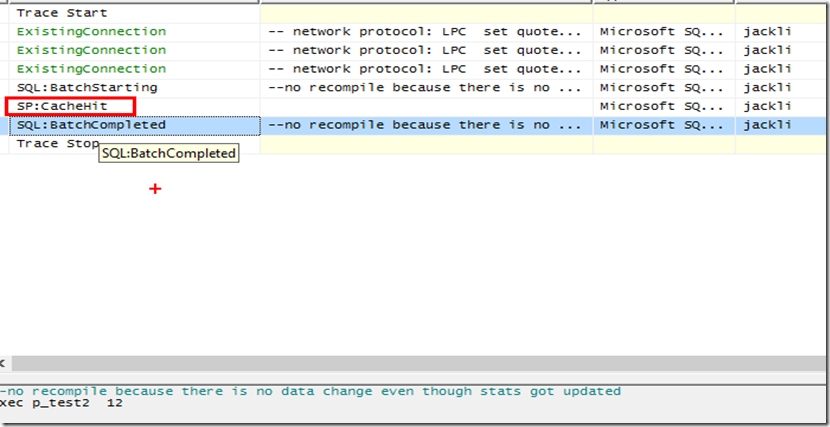 Scenario 2 actually has complications.  Suppose that you updated statistics yesterday.  Today you decided that you need to update statistics with fullscan thinking that it may produce better statistics to benefit queries.   But there was no change in data.  You may be in for a surprise that SQL still used the same plans without recompileing.   In such case, you will need to manually free procedure cache to get rid of the plan.