Turn on suggestions
Auto-suggest helps you quickly narrow down your search results by suggesting possible matches as you type.
Showing results for
Show  only  | Search instead for
Did you mean:
Bulk Insert and Kerberos
By


I recently worked on two Bulk Insert cases that dealt with Kerberos. My favorite past time! In both cases, the customers were hitting the following error:

This issue came down to Kerberos Delegation. In one case they were wanting to use Full Trust delegation, but there was some confusion on the CIFS principal. We don't need to add a CIFS Principal . You should just be able to enable Delegation for the SQL Service Account and it should work.

For more details about both, keep reading…

In the example I'm going to walk through, I'm just using a simple text file (ALongTimeAgo.txt) that contains the following:

Nothing fancy. The Bulk Insert is just going to try and load this data into a table I defined to hold a FirstName, LastName and Email.

Here is a look at what the environment looks like.

The File is sitting on a different server than what SQL Server is running on. Therein lies the problem. If we look at Process Monitor , which is a free SysInternals tool, we can see the Access Denied. This was run on the SQL Server, because that is where the CreateFile API call is made. 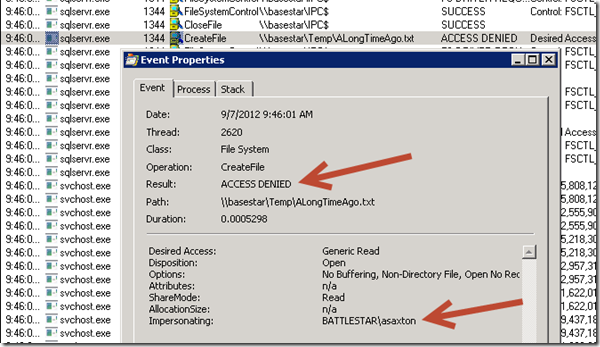 We can see that the request is trying to impersonate me instead of using the service account to access the file. We can look at dm_exec_connections to see that I'm connected to SQL using Kerberos.

If I look at the delegation settings for my SQL Server's service account (BATTLESTAR\sqlservice), I see the following: 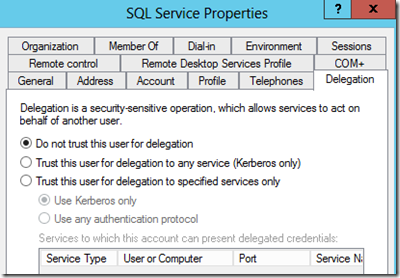 Let's give the Full Trust option a try to see what happens. I'll need to restart the SQL Service after the change is made to clear any cache from an LSA perspective. LSA will cache failures. 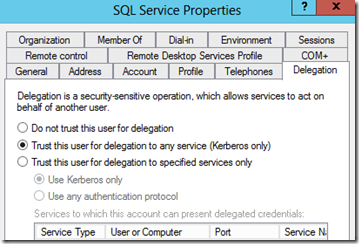 I've had mixed results with restarting the SQL Service vs restarting the whole box (see this blog post ), you may get away with just restarting the service, but you may need to reboot the box. After I restarted, I see the following:

Because we are hitting a file server, we are interested in the CIFS service. One thing I've seen people do is go to create the CIFS SPN because when they go to look at the Machine Account for the file server, they don't see it.

However, CIFS is covered by the HOST entries. Similar to HTTP. We do not need to add a CIFS SPN. However, with the Constrained Delegation, we do need to add the CIFS Service there. It should show up because the HOST entry is present on the Machine Account. 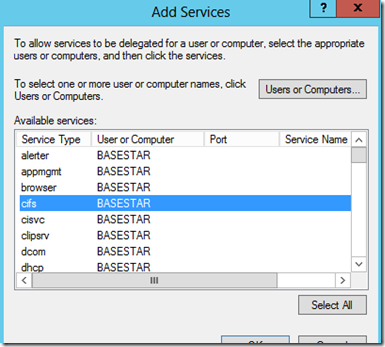 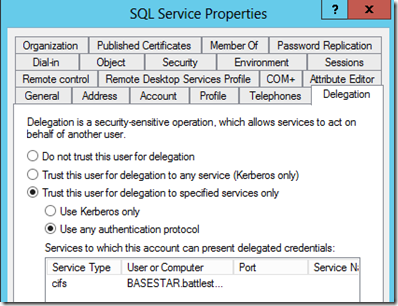 I found that I had to pick "Use any authentication protocol". I actually didn't expect that, but that is what I found through my testing.

So, with that set, I reboot the SQL Server again and give it a try.

We know Full Trust worked! So, why didn't Constrained Delegation work? I had enabled Kerberos Event logging earlier to catch items. So, when I look at the System Event Log on the SQL Server, I see the following:

NOTE:  Be aware that with Kerberos Event Logging, that failures may be caches and you may not see anything.  You may have to recycle the Service or reboot the box to actually see the failure. 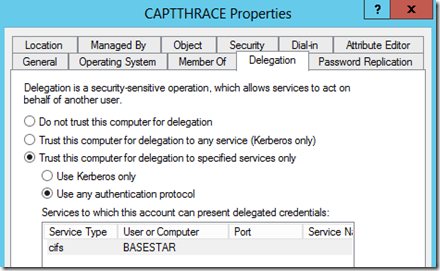 It works! So, what happened?

SMB2 is more asynchronous to maximize performance and causes you to run into this issue with Constrained Delegation. You could actually hit this with SMB1 as well, but it isn't likely as most requests will come from a thread that has the context of the user.

So, your options to get this working if you went down the path of Constrained Delegation are the following:

Note:  If you are running a SQL Cluster, and want to configure Constrained Delegation, you have to do it on each physical node machine account in the cluster.  Doing this on only the virtual node account will not allow this to work properly.