Over the past couple of months I've been putting together a presentation on the Lookup Transform. I presented most of it as a Chalk Talk at the MS BI Conference last week, and from the evaluation scores, it seems like it was pretty well received. I'll be splitting up some of its content into a series of blog posts over the next little while. If you're interested in seeing the whole talk, it will also be shown at the SSWUG Virtual Conference in November.

The most important setting of the Lookup Transform is the Cache Mode - it can greatly impact your data flow performance, and affects overall package design. Because of its importance, we made it the first thing you see in the new 2008 Lookup UI. I feel this is a great improvement over 2005, where the cache mode was abstracted away - see Michael Entin's post for more details. 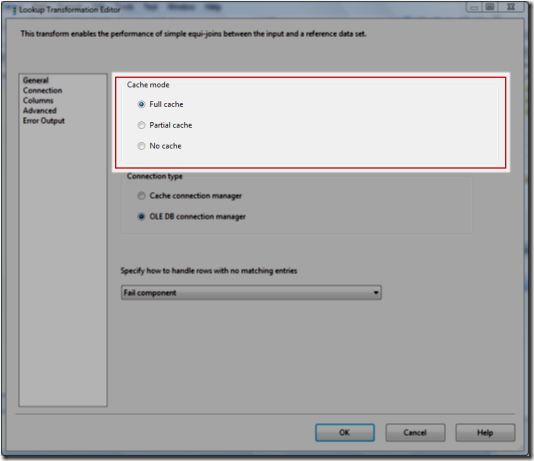 The default cache mode for the lookup is Full cache. In this mode, the database is queried once during the pre-execute phase of the data flow. The entire reference set is pulled into memory. This approach uses the most memory, and adds additional startup time for your data flow, as all of the caching takes place before any rows are read from the data flow source(s). The trade off is that the lookup operations will be very fast during execution. One thing to note is that the lookup will not swap memory out to disk, so your data flow will fail if you run out of memory.

Since no caching is done during the pre-execute phase, the startup time using a partial cache mode is less than it would be for a full cache. However, your lookup operations would be slower, as you will most likely be hitting the database more often.

When running in partial cache mode, you can configure the maximum size of the cache. This setting can be found on the Advanced Options page of the lookup UI. There are actually two separate values - one for 32bit execution, and one for 64bit. If the cache gets filled up, the lookup transform will start dropping the least seen rows from the cache to make room for the new ones.

In 2008 there is a new Miss Cache feature that allows you to allocate a certain percentage of your cache to remembering rows that had no match in the database. This is useful in a lot of situations, as it prevents the transform from querying the database multiple times for values that don't exist. However, there are cases where you don't want to remember the misses - for example, if your data flow is adding new rows to your reference table. The Miss Cache is disabled by default.

As the name implies, in this mode the lookup transform doesn't maintain a lookup cache (actually, not quite true - we keep the last match around, as the memory has already been allocated). In most situations, this means that you'll be hitting the database for every row.

To find out more on how to implement the look up transform, please see these books online entries: