First published on MSDN on Nov 27, 2015
Most of the SSIS data flow components allow customers to log the rows with errors to a dedicated error output, which can help customers to investigate and diagnose the root cause of the error. Error output has two 4-byte int columns ( ErrorCode and ErrorColumn ), which indicate the error code and the id of the error column.


In SSIS data flow, there is a concept named "lineage ID", which is associated with an input or output column. In general, the lineage ID of a column represents the ID of the original upstream output column, here I just call this upstream output column “lineage column”. The lineage ID allows customers to tell where the data of current column comes from. Actually, most of the components will put the lineage id of the error column to its error output. However, it’s very hard for customers to identify or locate the exact lineage column name based on an int lineage ID.

If you open the Advanced Editor of a data flow component, you can see column properties such as ID , IdentificationString , LineageID in the Input and Output Properties tab, where the property ID is associated with the property IdentificationString , a human readable string that uniquely identifies an input or output column. An example of identification string looks like: “ OLE DB Source.Outputs[OLE DB Source Output].Columns[UserID] ”. However, currently there is not a similar property that is associated with the property LineageID , which makes it hardly to know the upstream lineage column of a column.

To address the problem, a new property LineageIdentificationString has been introduced. According to this property, developers can easily identify the lineage column of any input or output columns, which will be useful in pipeline designing.


Data Viewer allows customers to see the data rows that come from the upstream output and is often used for debugging errors in SSIS. And if it is enabled on an error output, in addition to all regular columns including ErrorCode and ErrorColumn , there will be another virtual column ErrorCode - Description , which contains the error message translated from the value of the column ErrorCode . However, previously there is not a similar virtual column that can translate the value of ErrorColumn to the identification string of the error column. 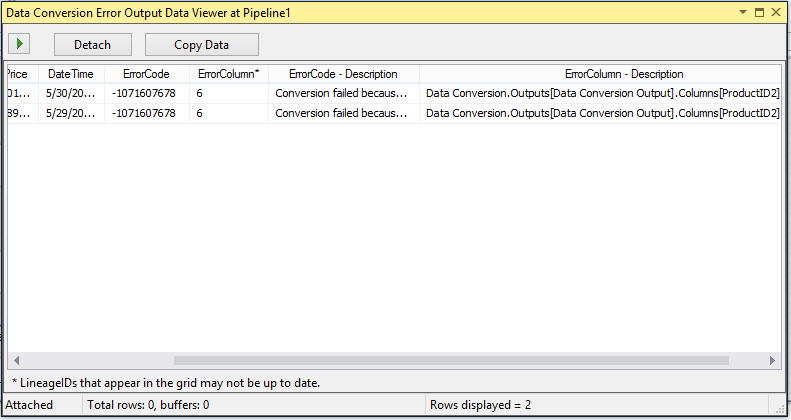 
Although the improvement on Data Viewer can help customers to know the information of error columns in designer, we still need another story on diagnosing pipeline errors after the package has been deployed to SQL Server, because there is no designer to help at that time. Obviously the most common way for diagnosing on SQL Server is leveraging execution log.

Our error column improvement now allows SSIS runtime to write the int column ID to identification string map of all pipelines in XML format to the package level event DiagnosticEx , so that customer can find out the exact error column information by looking up the XML document. Here is a sample of the XML document:


Please note that customized logging level is also a new feature introduced in SQL 2016 CTP 2.3. Later there should be another blog talking about more details about this feature.


We also provide related public APIs so that customers can build their own related solutions on top of the APIs. First, we created a new interface IDTSComponentMetaData130 that inherits from IDTSComponentMetaData100 . There is a new method inside this new interface to get the identification string based on the int column ID:
string GetIdentificationStringByID(int lID);
It can be accessed both in the component base class PipelineComponent and Script Component , so that both 3 rd components developer and SSIS package developer can leverage this method to get the identification string according to a column ID.

Below is an example to showcase how to leverage the new method GetIdentificationStringByID in Script Component to get the identification string of the error column.


ErrorColumn is an important information in pipeline error diagnostic. However, in previous versions of SSIS, customers don’t have any easy way to make use of such information. This blog has introduced several improvements we have made on ErrorColumn , which have covered design time and runtime diagnostic with ErrorColumn , and we have also provided public APIs to help customers easily implement their own scenarios related to ErrorColumn .