Turn on suggestions
Auto-suggest helps you quickly narrow down your search results by suggesting possible matches as you type.
Showing results for
Show  only  | Search instead for
Did you mean:
VGA Conferencing in Lync Server 2010
By


Microsoft Lync Server 2010 communications software adds VGA conferencing to a set of video capabilities that includes peer-to-peer video with a maximum resolution of high definition (HD) 720p and conference video supported by the Polycom CX5000 USB conferencing device. This article describes the video platform in Lync Server 2010 for peer-to-peer and VGA video conferencing. (Note that interoperability scenarios with Polycom and other partners are supported in Microsoft Lync 2010 but out of scope for this article. Check the NextHop blog again soon for an article about Lync 2010 video interoperability.)


To support multiple resolutions, a discovery mechanism negotiates the highest video resolution. This requires each client to publish their video capabilities when a conference begins. You can see this information and negotiation in the client Session Description Protocol (SDP) traffic that is captured in local Unified Communications Client Platform (UCCP) logs (for example, Communicator-uccapi-1.uccapilog). If logging is enabled on your client, you’ll find these logs in the %userprofile%\tracing directory and can view them by using the Snooper tool. Look for the x-caps line that shows the resolution and frame rate a client is capable of.


Each x-caps line shows a media type, a unique identifier, the resolution (represented by width and height), the frame rate, and the bitrate in the following syntax:


Note. I added line breaks to improve readability. This entry is all on one line in the SDP.


The first line in this example shows the video capabilities for RTVideo (numeric media type 121 or x-rtvc1). The second line shows the characteristics of HD video (720p) with a resolution of 1280x720, at 30 frames per second (fps) and a bitrate of 1.5 megabits per second (Mbps) maximum. Subsequent lines show lower resolutions and framerates for VGA, CIF, and quarter CIF (QCIF), respectively.


In Microsoft Lync 2010, the frame rate for HD is increased to 30 fps from 25 fps in Microsoft Office Communicator 2007 R2. A single core computer can decode VGA at a reduced frame rate—this is necessary to support single core clients viewing a VGA conference. We’ll cover this in more detail later, in the section “Conference Video.”


There are a number of other factors at play—just because your client is capable of using HD, doesn’t mean your users will see HD video. Factors affecting this negotiation include the following:


Streaming and real-time IP video encodes discrete images as frames. Frames are sent in rapid succession (for example, in HD, 30 frames are sent per second) and decoded by the receiving end so that the user sees continuous video. Different types of frames optimize the number of bits required to encode and send subsequent images. Lync Server uses the following common frame types:

Microsoft Office Communications Server also uses a special frame type that is an optimization of the VC-1 codec, which RTVideo is based on. This is called a super-P (SP)-frame . SP-frames are sent every second. This allows for better recovery in environments with high packet loss.


Frames are grouped together in a structure called a group of pictures (GOP) . Each GOP begins with an I-frame. After that, the GOP is different for Lync Server and Office Communications Server.

Figure 1 shows RTVideo CIF at 15 fps, so you see a SP-frame every one second or every 15 frames. B-frames and P-frames follow I-frames and SP-frames in a BPB pattern every second.


In Lync Server, the SP frame is removed, so RTVideo has minimal differences from the VC-1 standard it’s based on. The GOP has been reduced to four seconds for peer-to-peer calls and three seconds for conferences. Figure 2 is an example of a Lync Server conference GOP. 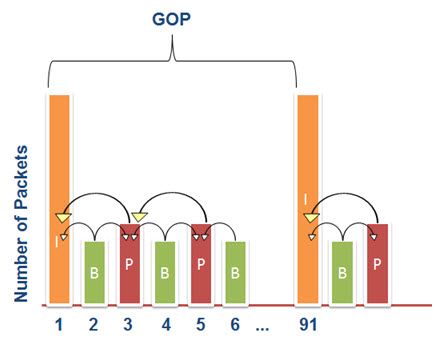 In this example, I’m assuming RTVideo VGA at 30 fps, so you see an I-frame every three seconds or every 90 frames. B-frames and P-frames follow I-frames in a BPBP pattern.


Now that you understand how Lync Server performs video, let’s take a closer look at how this applies to conferences. For peer-to-peer video, the endpoints negotiate the correct video codec and resolution over the signaling channel. When a user changes the size of the video window, the video resolution is changed in the call signaling (by using the real-time transport control protocol, or RTCP).


Conferences complicate things—we now have a larger group of participants to negotiate conference video resolution and, potentially, a need to accommodate clients that can’t negotiate VGA.


Conferences start at CIF resolution. Requests to increase to VGA are initiated by users switching to full-screen mode or increasing the size of their video window to align with VGA (640x480) resolution. These requests are sent to the A/V Conferencing Server over RTCP. The Lync Server Audio/Video Conferencing service aggregates these requests and adjusts conference video resolution accordingly. A single stream is sent to all conference participants—either CIF or VGA.


If a participant is using a single processor computer that can’t properly decode VGA, the Lync Server Audio/Video Conferencing service uses a technique called rate matching to reduce the frame rate. As shown in Table 1, this will be either VGA at 13 fps or 15 fps, depending on the client version. 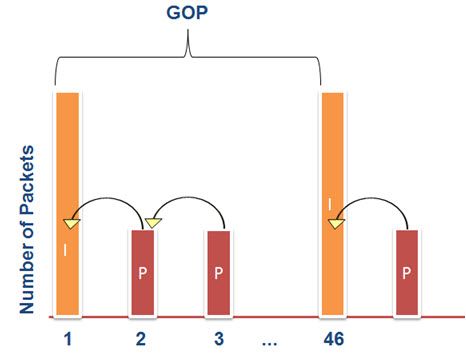 Because I-frames and P-frames are not dependent on B-frames for decoding, rate matching doesn’t introduce artifacts into the video stream.


VGA conferencing leverages high fidelity video to bring more value to conferences. To create this more seamless user experience, some behind-the-scene changes were required. I hope this article gives you an understanding of these changes and some information about what you see in a Lync Server network trace and the user experience with peer-to-peer and conference video in Lync.


Note. VC-1 is the standard code that RTVideo is based on.