Turn on suggestions
Auto-suggest helps you quickly narrow down your search results by suggesting possible matches as you type.
Showing results for
Show  only  | Search instead for
Did you mean:
Skype Room Systems v2 Awareness: Windows Update Notification Pop-Up Observed in User Mode
By 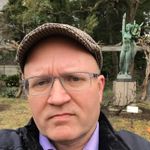 Nov 5, 2018 Update, 2:27PM PST: It's been confirmed that the notification can be dismissed by touching the console screen outside of the notification window.  The SRSv2 team is confirming whether the update will then be applied after the next maintenance cycle.

Admins should be aware that a Windows Update notification may appear in user mode (i.e. on top of the SRSv2 user interface) as part of the recent Win10 Version 1803 Update release to SRSv2 devices.  The notification (photo below) was first observed after unblocking the Windows 10 Version 1803 Update on November 1st.  This blog will be updated as soon as more information is known. 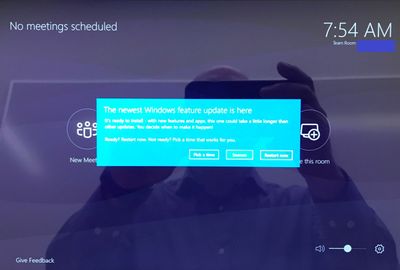 The update may take anywhere from ten minutes to forty-five minutes to complete when selecting the "Restart now" option.  Consequently, care should be taken when restarting at the start of a scheduled meeting.