Turn on suggestions
Auto-suggest helps you quickly narrow down your search results by suggesting possible matches as you type.
Showing results for
Show  only  | Search instead for
Did you mean:
Skype for Business MVP Spotlight: Greig Sheridan
By

It's been some time since we highlighted an MVP around here!

Next week, MVPs from around the world will gather on campus in Redmond, Washington to hear from Microsoft Product Teams and gather together for a few days.  It's an intense week of learning, hearing what's to come, meeting new faces & seeing old faces, trying to soak it all in.  One of the best things about the MVP Global Summit is sharing feedback directly with the product groups.  We're looking forward to a really fun & productive week!

It felt like the right time to put the spotlight on @Greig Sheridan - hailing from beautiful Sydney, Australia. 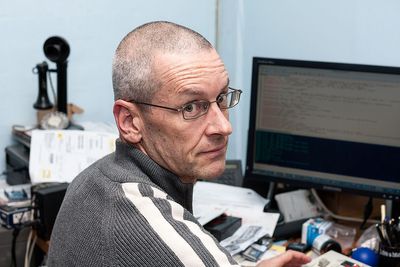 Yes, Greig - the spotlight is on you...Practice Lead - UC at Generation-e

I asked Greig a few questions and I'm happy to say, he welcomed us into a bit of his life...

Laurie: What is your favorite sport (to play or to watch) & why?

Greig: I've never been much of a sporting person but I really enjoy playing pool (or 8-ball as it's known elsewhere on the planet) and ten-pin bowling. Both are very social pursuits with lots of opportunity for conversation between each player's turn.

Laurie: What do you do for fun when you aren't talking Skype for Business?

Greig: I've always been interested in electronics and I still enjoy dabbling there, although the workbench doesn't see much use these days. I've loved coding since I was a kid, and that's something I get to do today as part of my work (primarily with PowerShell) and of an evening and weekend when I'm writing C# utils & scripts for Skype for Business or tinkering with an Arduino or Raspberry Pi on all sorts of home automation projects .

My partner and I hold an annual house-warming party and each year we try to do something fun with home-brew lighting and effects. Last year we mounted a grid of fifty tiny laser LEDs criss-crossing the room at 30cm intervals, and if you broke a specific beam (or a combination of beams) a Raspberry Pi sent a message over Telnet to the PC running the lighting software to trigger a change.

The previous year it was a giant Newton's Cradle made of 36cm heavy plastic fishing floats, strung above people's heads. It fired at seemingly random intervals, controlled by an Arduino. We used a shop door minder to monitor if the balls were settled and a motorised car radio antenna with a magnet glued to the end to pull back the first ball. There's nothing you can't do with magnets!

I'm also the cook here at home. One of my favourite recipes is an accompaniment I call "wasabi surprise". It's just mashed potato with wasabi paste stirred through -- but only barely! The nose-hair curling "surprise" is when you get a hit of wasabi that I didn't stir in fully. Occasionally that turns out to be me, but I'm not afraid of living dangerously!

While I'm cooking dinner is usually the time I update myself with the community's podcasts, like The Cloud Architects, Josh's Recap, Pat Richard's UC Inside Track & what the Canadian boys are up to in O365Eh!. 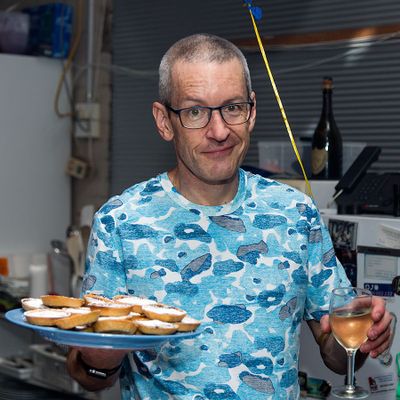 Laurie: What is your favorite Skype for Business Feature and why?

Greig: In my previous career as a PABX Engineer I grew interested in developing applications for advanced call routing and Computer Telephony Integration (CTI). Our vendor offered a Software Development Kit (SDK) that cost $USD5,000 and was MAC-locked to an individual developer's PC. That idea died quickly.

When Microsoft came to us and pitched their UC offering  "OCS 2007“ I was stunned by all the CTI it provided out of the box, and that the SDK was free! That openness meant that vendors, integrators and the odd hobby coder like me could create plugins and utilities that improve on the feature set, or add new ones.

Wind forward a decade and we see that Microsoft was clearly ahead of its time, with Microsoft and other vendors now open-sourcing products and including open-source code into their own products.

What we used to call CTI back in the 90s evolved into Unified Communications and again recently into Intelligent Communications, so it's been exciting for my career to have tracked along with that.

Laurie: Tell me about a Skype for Business Success Story:

Greig: I get a lot from projects where I become a de-facto part of the customer's team, and the bigger those are the longer we spend getting to know each other. I share my skills and experience with the team as they move to their new UC platform, and always learn tips and tricks from them along the way too, so it's definitely a 2-way street.

A couple of years ago I was lucky enough to travel around Australia rolling out Lync 2013 to a vast multi-national. Each capital city site had an SBA with PSTN gateway and ISDN trunks. Given my Telecom (telco) heritage here I'm legally allowed to work with the cabling and thus there was the need to have me on-site. I even finally got to see Darwin up in Australia's north -- the only capital I'd never visited. (For those not familiar with the scale of Australia, it's roughly the size of the Contiguous United States).

Down at the southern-most tip of Australia in Tasmania, the customer's engineer and I flew into Launceston for its cutover and then hired a car the next day for the 2+1/2 hour trip to the Hobart job. I drove and he had the PC open on his lap, VPN'd into the network. Together we worked on trouble tickets, triaging, debugging and brain-storming solutions out loud as the scenery went by. I remember this part of the project with much fondness.

Together we travelled the length and breadth of this huge country sharing some great times and successfully rolling out a fresh, innovative communications platform. We're still mates and catch up when our travels permit!

Laurie: What do you love about the MVP Program?

Greig: The camaraderie is pretty special -- it's a really wonderful feeling to be a part of a globally-distributed family like this. The MVP Summit is this family's Christmas, with people from across the planet making the pilgrimage to Seattle to share stories and meals together.

It's also I think unique in the tech world that Microsoft runs this global program for people who are essentially its customers, providing us with a feedback channel directly into the heart of the product groups.

Trawling the web and stumbling across content from MVPs from other award categories is always a buzz too.

Laurie: How does the Microsoft Technical Community help you in your role?

Greig: It's absolutely invaluable. These are the forums and people you can turn to for design advice or problem resolution guidance, tips, tricks, the latest updates, and lots of how-to assistance. It's not just the MVPs there either there's a vast global community of people sharing their advice and helping out.

And, for the most difficult question -

Laurie: Who is another MVP who you respect and why?

Greig: That's a really tough question: they're all amazing. @Ken Lasko ("The Hoff") and @Pat Richard are two MVPs I particularly admire. These guys write and maintain scripts and utils that are in daily use across the planet, and from my own experience I know how time-consuming that can be, and of the pressure to make sure you get it right. I can mail Pat about a bug or a suggestion for a new feature and he'll pop up in an IM in response, even though it's midnight where he is.

I have to say though I'm particularly in awe of those who can put in a solid days work for their employer & all of their after-hours contributions as MVPs -- and yet still be able to raise a young family. I know @Andrew Morpeth in New Zealand and @James Cussen in Melbourne both have newborn babies at home, and there are undoubtedly many more. Hats off to you all! I'm hoping James has some tips he can share with us? 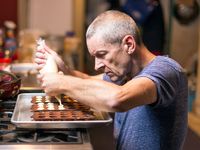 Greig hard at work...Thanks Greig!  It's fun getting to know you - now get back to that baking & be sure to bring some with you next week!