Turn on suggestions
Auto-suggest helps you quickly narrow down your search results by suggesting possible matches as you type.
Showing results for
Show  only  | Search instead for
Did you mean:
Lync Server 2010 Geographically Dispersed Edge Topology: Part 2
By


In this Edge Server environment, Contoso has data centers deployed in Redmond and Singapore. Each office is considered the primary user location for its region. Each location has a deployed and functional Lync Server 2010 pool.


Contoso’s data centers in Redmond and Singapore both contain a Lync Server 2010 pool with an Edge Server deployed in the perimeter network. The Edge Server topology allows remote users in Redmond and Singapore to collaborate with internal users in either pool with all modalities—IM and presence, conferencing, application sharing, and A/V. Remote traffic is kept regionalized whenever possible. Contoso is open federated; this allows users to find contacts in other organizations and to communicate with them.


Litware also has Lync Server 2010 deployed with an Edge Server in the perimeter network. Litware is also automatic discovery which allows its users to find contacts in other organizations and to communicate with them as well.


In this scenario two Lync 2010 users, who reside in different Lync Server 2010 organizations, decide to have an Audio/Video conversation using Lync 2010. Lync-U1 works offsite for Contoso. Lync-U2 works onsite for Liteware. Contoso and Liteware are federated with each other. In Figures 1, 2, and 3 we look at three different segments of the call setup and call flow between Lync –U1 and Lync-U2.


1) Lync-U1 signs in to the Singapore Lync pool through Redmond Access Edge Server (Figure 1). Because Lync-U1 is remote and not leveraging VPN, the Lync 2010 client sends a SIP INVITE that contains Lync-U1’s credentials to the Edge Server over NTLM . The SIP OK contains valid Media Relay Authentication Server (MRAS) information to establish a call.


2) Redmond Edge Server proxies a connection to the Redmond Director.*


3) Redmond Director authenticates Lync-U1 and proxies the connection to Singapore Lync pool (because this is where the user is homed).


4) MRAS response information is sent to the client by sending a SIP 200 OK message from the Redmond Access Edge Server.


*Note : The Director is an optional and recommended server role that can be deployed in a Lync server 2010 deployment. A common scenario where a Director is deployed is when security to the perimeter network is a concern and\or remote usage will be leveraged with multiple pools in an organization. The Director is responsible for proxying SIP traffic to and from the Edge environment. 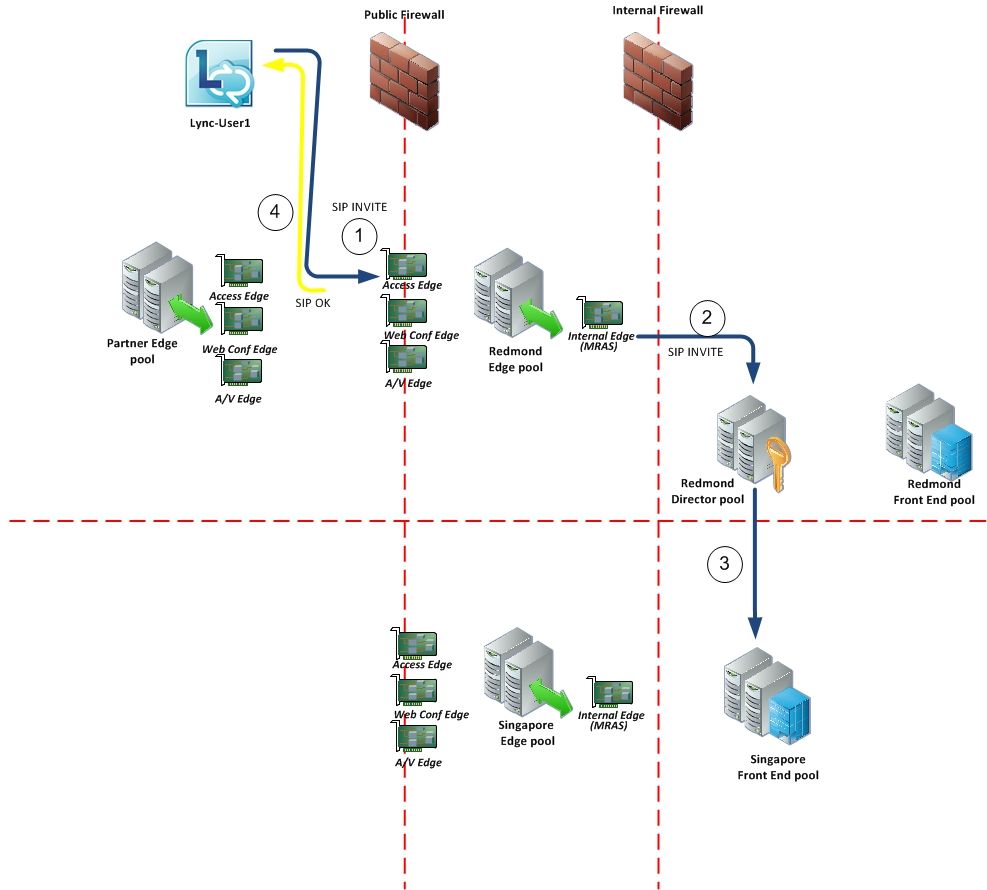 
1) Lync-U1 signs in to the Singapore Lync pool through Redmond Access Edge Server (see Figure 2). Because the user is remote and not leveraging VPN, the Lync 2010 client sends a SIP INVITE that contains the Lync-U1’s credentials to the Edge Server over NTLM. The SIP OK contains valid MRAS information to setup the call.


2) Redmond Edge Server proxies a connection to the Redmond Director.


3) Redmond Director authenticates Lync-U1 and proxies connection to Singapore Lync pool (because this is where the user homed).


5) The MRAS service on the Singapore Edge pool responds to the Front End pool request.


6) The Singapore Front End pool is responsible for sending the MRAS response to the client by sending a SIP 200 response through the Redmond Access Edge service. 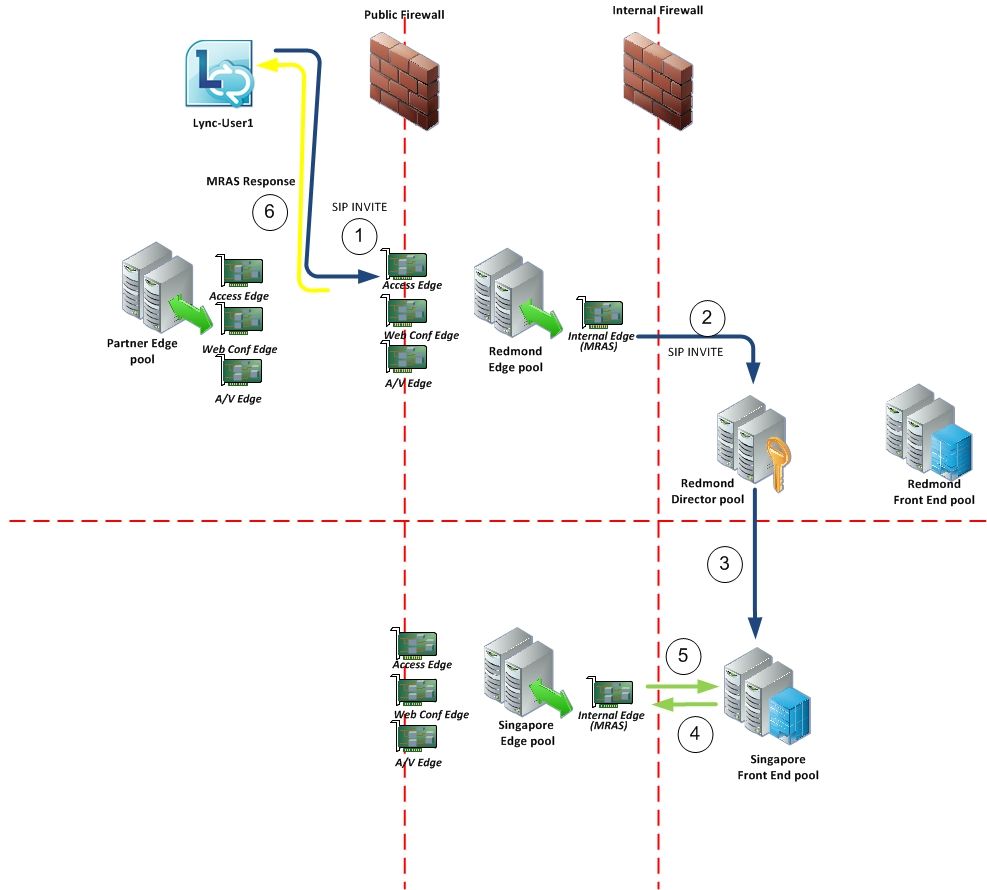 
1) The call is initiated by Lync-U2. Lync-U2’s Edge pool sends SIP INVITE information, which contains all the ICE candidates for the call, to the Redmond Edge pool. Redmond Edge pool contains the Access Edge service for the Singapore Front End pool (see Figure 3).


2) Lync-U1, the call recipient, sends back a SIP SESSION PROGRESS message that contains the call information and also sends ICE candidate information from the client, through the Redmond Edge pool.


3) The Partner Edge pool and Redmond Edge pool communicate with each other through STUN\TURN messages.


4) Audio flows between the two clients; and the caller relays media traffic through their Audio/Video Edge service. 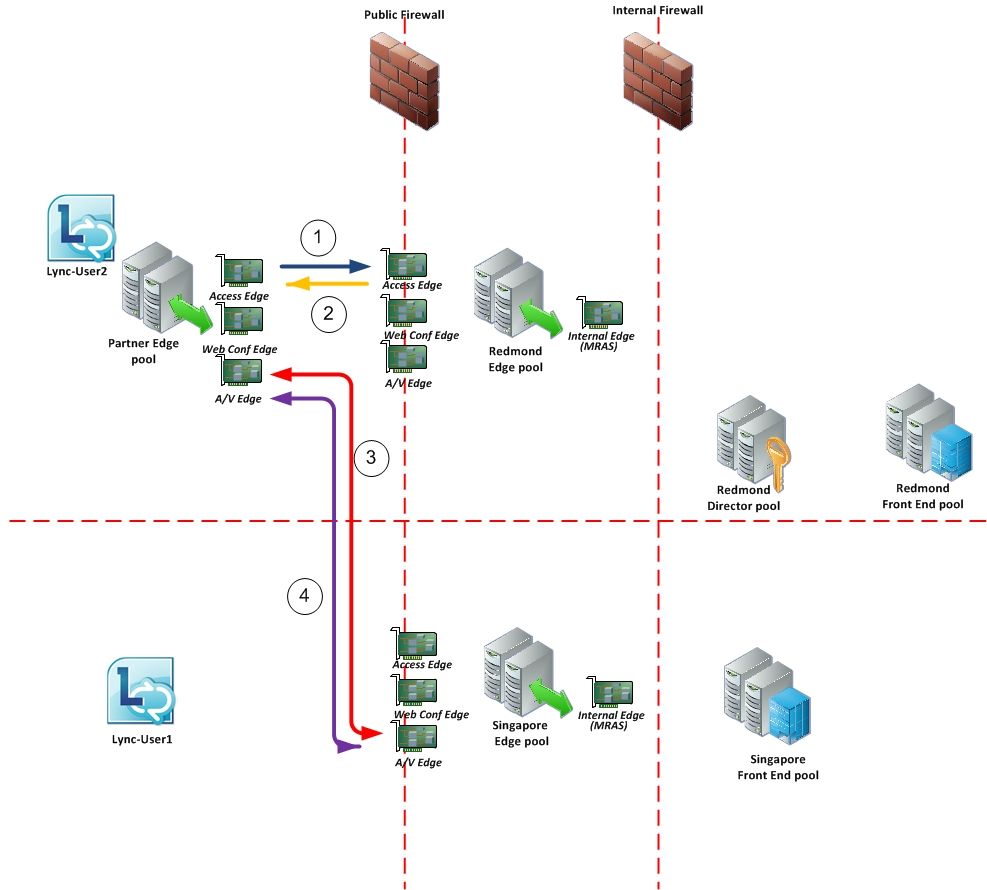 Figure 5. Shows the call SIP trace (the example addresses that are used are included)


Note: The example IP addresses are used are included Figures 5 and Figure 6.


2. Lync-U2 and Lync-U1 both exchange candidate information that contains the available options for the federated Audio/Video call to take place. Since Lync-U2 is inside his Lync 2010 organization, he provides the relay address of the Audio/Video Edge public interface of his respective Edge pool. Lync-U2 initiates the call to the Lync-U1 and begins the ICE protocol connectivity checks to determine the best media path. In this case, the Partner Edge pool.


3. Lync-U2 and Lync-U1 exchange candidate information for each other in order to connect in the most direct route.


*Note : Candidates are possible combinations of available IPv4 addresses and randomly allocated TCP/UDP ports within the configured port ranges for the Lync client to use NAT traversal for media connectivity.


*Note : Figure 5 is part of the ICE protocol, the protocol that allows external clients to use NAT traversal for media connectivity. The ICE protocol candidates show local IP addresses, reflexive addresses in addition to relay IP addresses. The addresses are shown with pairs of TCP and UDP ports. These addresses are tried to test media connectivity between the Audio/Video Edge service and the Lync 2010 client on these respective ports.


4. Lync-U2 is the initiator of the call to Lync-U1 and begins the ICE protocol connectivity checks to determine the optimal media path which is the Partner Edge pool server. The process in Figure 6 shows the result of the candidate check and the identification of the Edge Server being used for the call.


The key takeaways from this scenario, when following call flows with Geographically Disbursed Edge Servers and federation, are as follows: