Turn on suggestions
Auto-suggest helps you quickly narrow down your search results by suggesting possible matches as you type.
Showing results for
Show  only  | Search instead for
Did you mean:
How to Create Visio and Excel Output from a TBXML File
By

How to Create Visio and Excel Output from a TBXML File


Prior to this role, Thomas worked in our Customer and Partner experience teams, handling high touch and critical deployments. Thomas is a key partner with the Lync documentation team and also a founding member of the NextHop team, where he contributes strategic direction, technical reviews, and technical articles.


While working with a customer on the Office365 Dedicated team, I encountered a situation where I needed to better understand the customer’s existing Lync Server 2010 topology. I asked the customer for the Topology Builder - tbxml file. However, viewing the file with the Topology Builder didn’t give me the information I needed. I wanted a topology diagram and an Excel version of the network data. Manually harvesting the information from the tbxml file was not feasible.


I did a quick web search and found Christopher Cook’s Empty Message blog. In September 2011, Chris wrote a post titled, Making sense of a TBXML . In this article, Chris shares a script called Get-LyncTopologyInfo . The script parses the data from a tbxml file and generates a Visio diagram and an Excel spreadsheet that contains the topology details. Awesome!


I tried the script, and after some trial and error, got it to work.


To resolve the unsigned script, I needed to change a “permission” and ultimately found the syntax in this post: Solution: Microsoft.PowerShell profile.ps1 cannot be loaded because the execution of scripts is... . Be mindful to start PowerShell using ‘Run as Administrator’.


Disclaimer : The sample script is not supported under any Microsoft standard support program or service. The sample script is provided AS IS without warranty of any kind. Microsoft further disclaims all implied warranties including, without limitation, any implied warranties of merchantability or of fitness for a particular purpose. The entire risk arising out of the use or performance of the sample scripts and documentation remains with you. In no event shall Microsoft, its authors, or anyone else involved in the creation, production, or delivery of the scripts be liable for any damages whatsoever (including, without limitation, damages for loss of business profits, business interruption, loss of business information, or other pecuniary loss) arising out of the use of or inability to use the sample scripts or documentation, even if Microsoft has been advised of the possibility of such damages.


Read Chris’ Prerequisites section closely. Trying to run the script immediately resulted in lots of errors and no exported content. After I grabbed Office 2010, Visio 2010, and the Visio Templates, I was successful.


Following are screen shots of the output generated by the script. 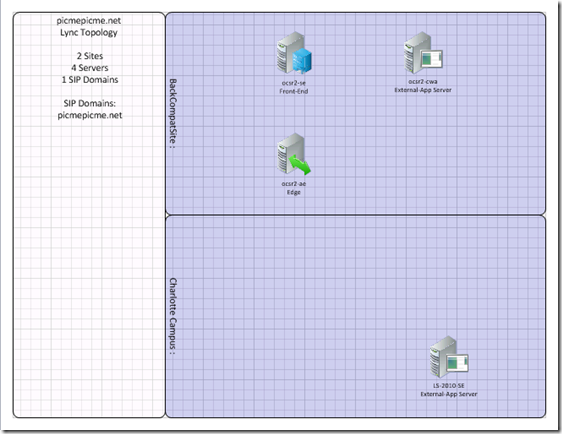 
When you find yourself trying to get a better understanding of a customer topology and all you have is the tbxml from Topology Builder, use Chris Cooks’ Get-LyncTopologyInfo script to generate a picture of their environment. This fast and easy-to-use tool generates a Visio diagram along with server configuration information in Excel file format. Kudos to Chris for the awesome tool.