Turn on suggestions
Auto-suggest helps you quickly narrow down your search results by suggesting possible matches as you type.
Showing results for
Show  only  | Search instead for
Did you mean:
Enabling Lync Media to Bypass a VPN Tunnel
By

First published on TECHNET on Nov 14, 2011
NOTE : As part of the Skype Operations Framework , Microsoft has released practical guidance on how to implement VPN Split Tunnel for Skype for Business Online. You can download the document here .

Many organizations utilize Virtual Private Networks (VPNs) to secure traffic when users are outside the corporate network. VPNs have numerous security benefits, but they can actually degrade the call experience for Microsoft Lync users. This occurs because Lync traffic is already secured. This article explores this common Lync Server 2010 deployment issue, and demonstrates how to utilize the existing infrastructure to redirect media traffic to bypass the corporate client VPN Solution. This solution maintains a secure environment and improves the Lync 2010 user experience.

Many organizations that deploy Lync Server 2010 encounter voice quality issues associated with the usage of a client VPN solution in combination with Lync 2010. When users connect to the corporate network using a VPN client, Lync media traffic is sent through the VPN tunnel. This configuration can create additional latency and jitter because media traffic must pass through an additional layer of encryption and decryption. The issue is compounded when the VPN concentrator is busy. Real time media traffic is not prioritized. This means that other network activity, such as a large file transfer, can potentially degrade the call experience of users.

To provide users with the best possible media quality, organizations should deploy a solution that prevents time sensitive real time media (voice/video) from traversing the VPN and simultaneously allows standard corporate network traffic to traverse the VPN. When considering this solution organizations should know the following:


Because end users typically require continuous VPN connectivity, it is not feasible for users to disconnect from the VPN before making or receiving Lync calls. The solution is to force Lync traffic around the client VPN, while allowing users to connect to other internal corporate resources. The solution encompasses the following areas:

NOTE : As part of the Skype Operations Framework , Microsoft has released practical guidance on how to implement VPN Split Tunnel for Skype for Business Online. You can download the document here .


Lync Server 2010 utilizes the Interactive Connectivity Establishment (ICE) protocol to establish media sessions between all Lync 2010 endpoints and servers. ICE attempts to establish media sessions between clients using all available ICE candidates on the client at the time of the call. Candidates are a combination of available IPv4 addresses and randomly allocated media ports on the machine with Lync 2010 installed. When a client VPN is connected, it often registers an IP address on a remote access interface on the client PC. Because of this, it is considered a valid IPv4 address; a candidate will be allocated for media connectivity to other clients. This is important because ICE tries candidates in the order shown below. When a media path is validated, the connectivity checks stop and the media is established.

3. UDP Relay- Between two external users or an external user and an internal user. This connectivity is relayed through the public IP address of the Audio/Video Edge service.

4. TCP Relay- The relay address (Audio/Video Edge Server public interface) when connectivity is not available on UDP. TCP Relay is a last resort.

When a Lync 2010 user is connected through VPN and attempts to call an internal Lync 2010 client, or tries to establish a media session with a Lync 2010 Server (Mediation Server, A/V Conferencing Server), the traffic attempts to pass through the VPN interface and is considered a UDP Direct candidate. If this connectivity check succeeds, the media traverses the client VPN solution. 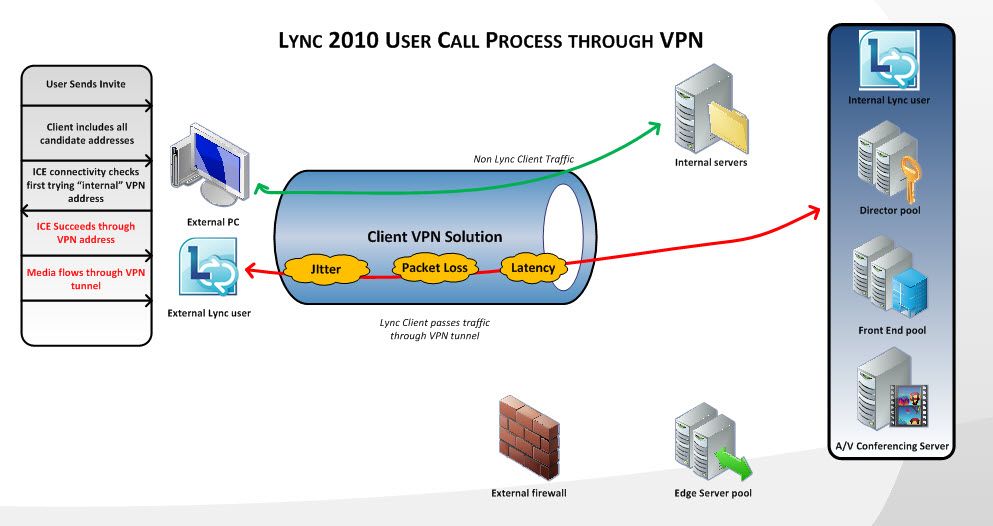 This scenario is a common default configuration issue. The requirements below define a solution that forces Lync client traffic through the Lync Edge Server ( UDP Relay candidates).

For more details on how ICE works for all Lync 2010 scenarios, see the Lync 2010 Resource Kit External User Access Chapter .


The solution to force VPN traffic through the Edge Servers must allow external Lync clients connected through VPN to do the following:

4. Block connectivity from VPN connected Lync 2010 clients to all Lync Servers and all internal client subnets through the VPN tunnel. In our example we used Windows Firewall to block this traffic. You can achieve similar results, however, if your VPN appliance has detailed rules to firewall client VPN traffic.


To allow Lync traffic to reach the public IPs of all services, the VPN appliance must be configured to allow a split-tunnel. A split-tunnel is a VPN connection that allows connections intended for internal resources to traverse the VPN. All other user requests are sent through the internet connection and bypass the corporate network. For more information on spilt-tunnel VPNs read Split tunneling .

In most split-tunnel VPN scenarios, DNS is provided by an internal DNS server. The server needs to be configured as described later in this article in the section Specialized DNS entries .

It is critical that all public IP addresses used for the Lync and Exchange environments are excluded from entering the VPN tunnel. A tunnel-all VPN policy does not allow traffic to bypass the tunnel and does not work with this solution.


Administrators can create a custom Windows Firewall rule set to prevent Lync client traffic from entering the VPN. There are multiple options to push this policy, but this article will use the Windows Firewall snap-in to create the rules. Using group policy, administrators can follow the same configuration tasks. Deploying rules through group policy scales well in larger environments. For the scenario described below, we assume the following:


Note : If you are not using Windows Firewall, but want to deploy firewall rules through your VPN appliance, consider the following rules:


The above rules, used in conjunction with the remaining configurations, allow you to force Lync 2010 traffic to relay through the Edge Server.


To begin, create a new inbound rule for the Lync application (Communicator.exe). This rule needs to be a Custom rule. See Figure 2 below. 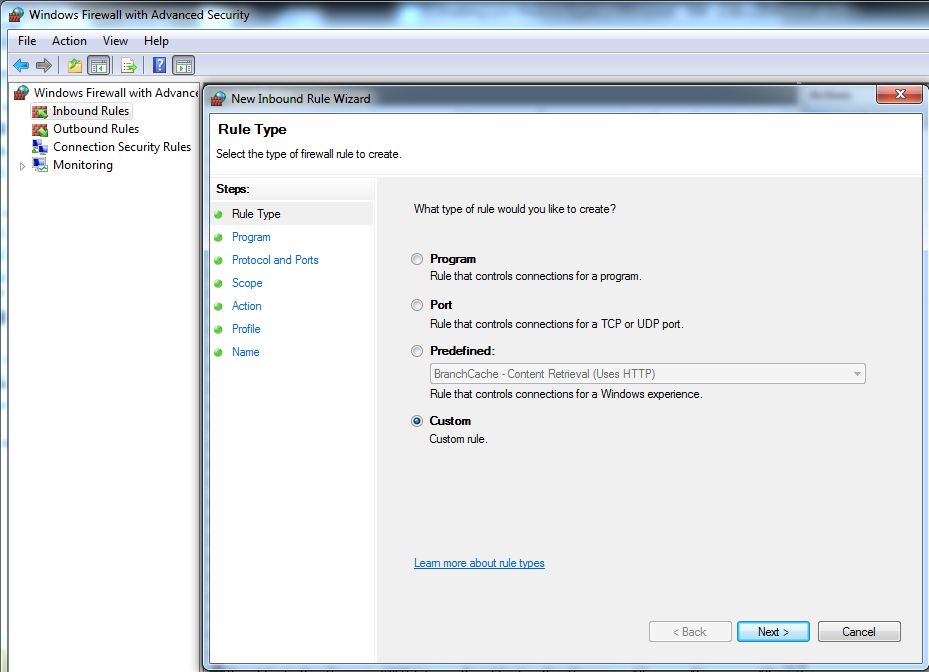 Next, specify the executable for Lync or Communicator (Communicator.exe) as shown in Figure 3. Although this article only covers the Lync client, the same principles can be applied to other applications such as Microsoft Office Live Meeting 2007 or the Microsoft Lync 2010 Attendee. 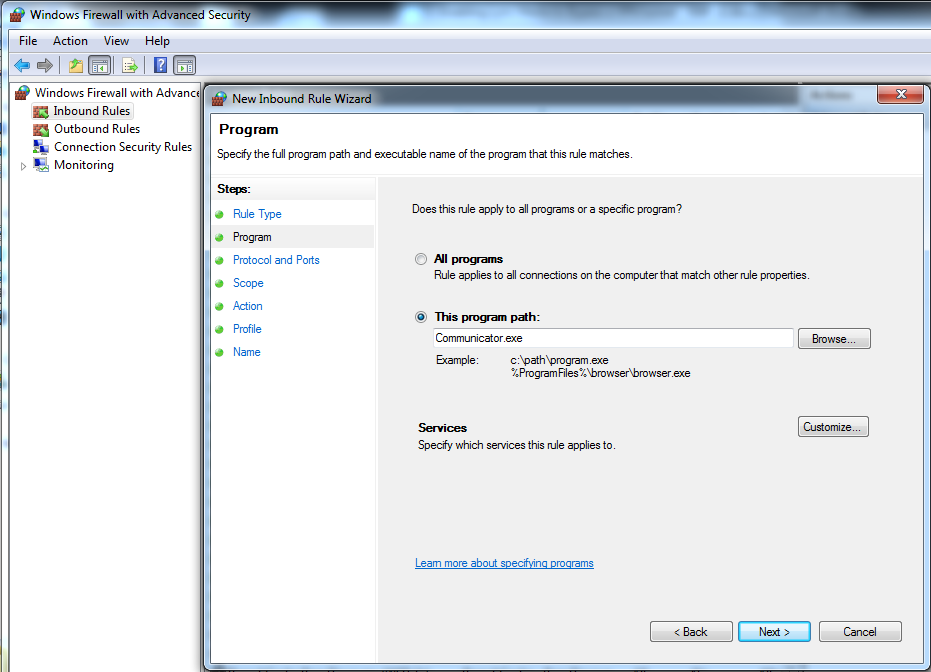 For protocols and ports, leave the default settings as shown in Figure 4. This blocks all ports and all protocols. 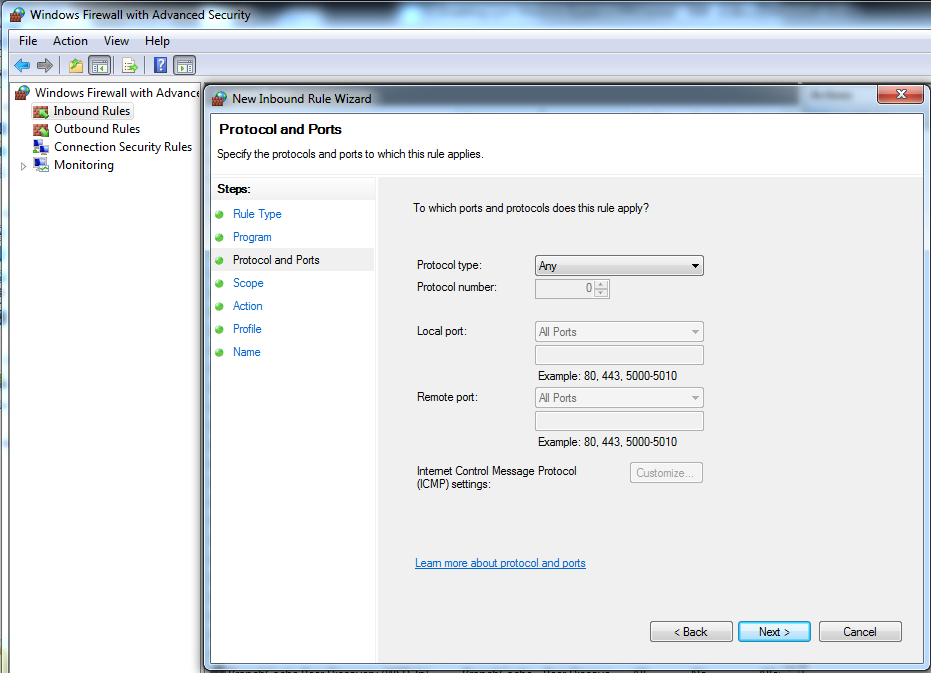 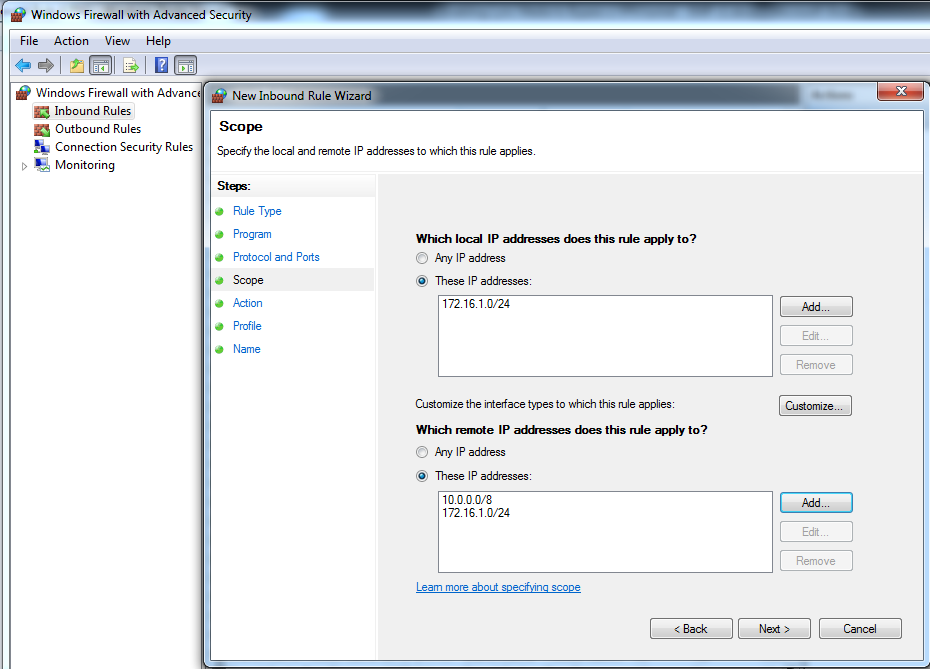 When in the Scope section, customize the interface type to include only Remote Access. See Figure 6. This prevents the configuration from being applied when not connected to the corporate VPN. 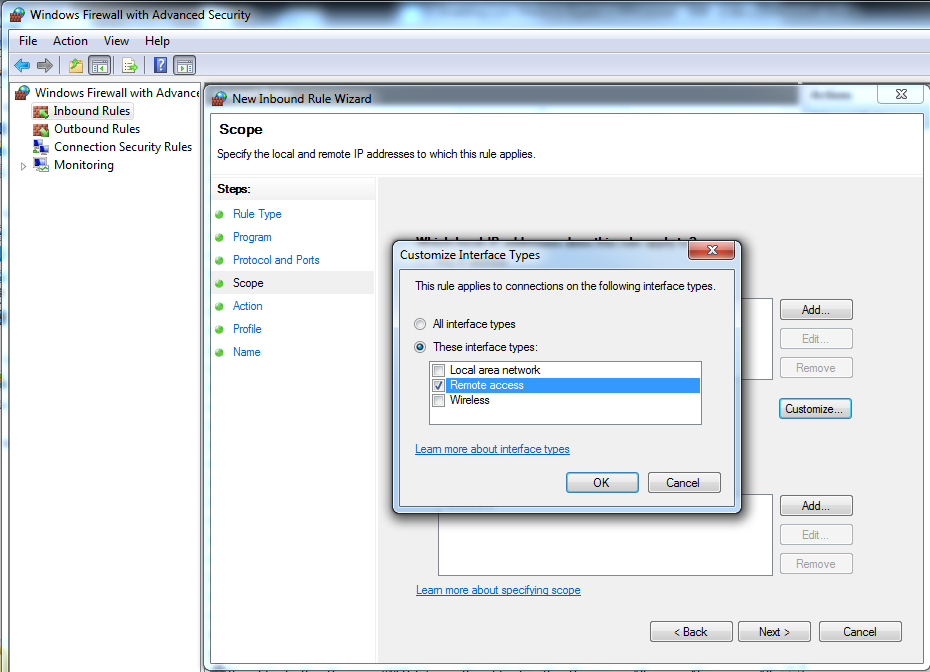 For action, choose block as shown in Figure 7. 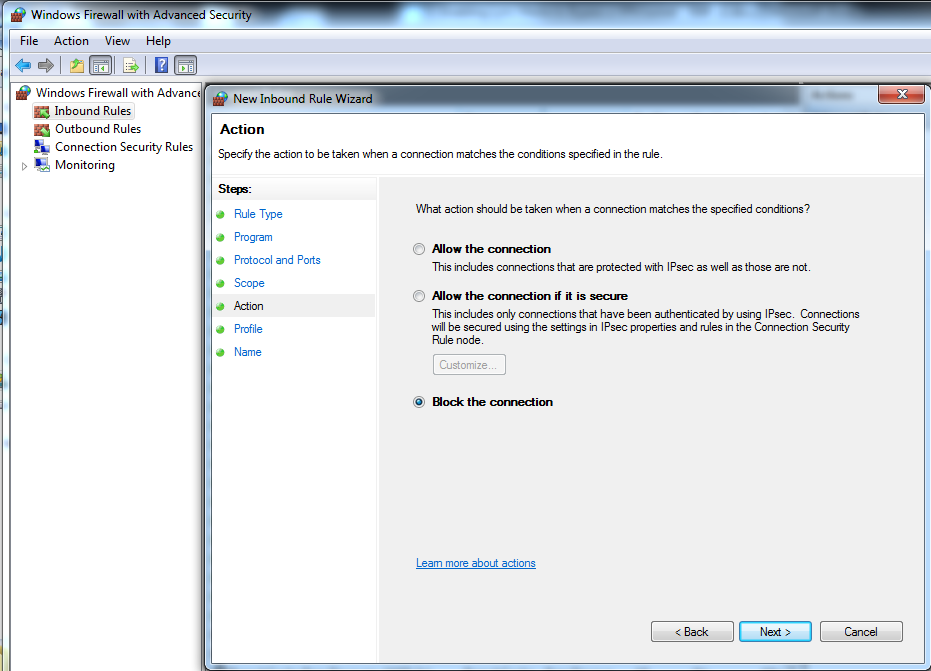 In the Profile screen select Domain. See Figure 8. This ensures the settings are only applied when connected to the users’ corporate Active Directory domain. This setting cannot be used for machines that are not joined to the domain. This setting keeps the configuration from being applied when connected to VPN networks other than the users’ corporate connection with the same network numbering. 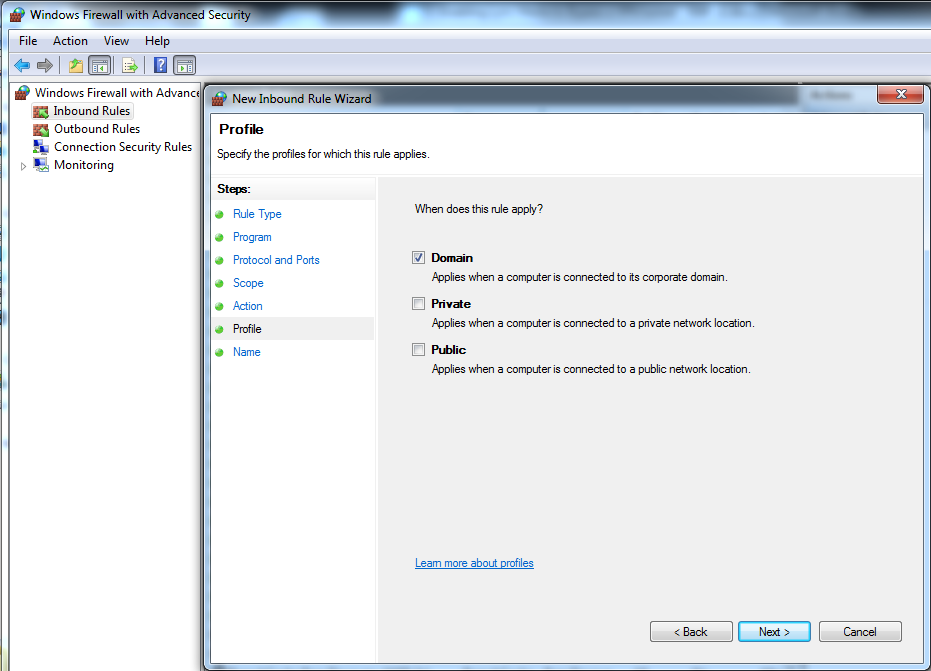 Give the rule a meaningful name and description see Figure 9.

Figure 9. Configure the name of your rule and provide a description 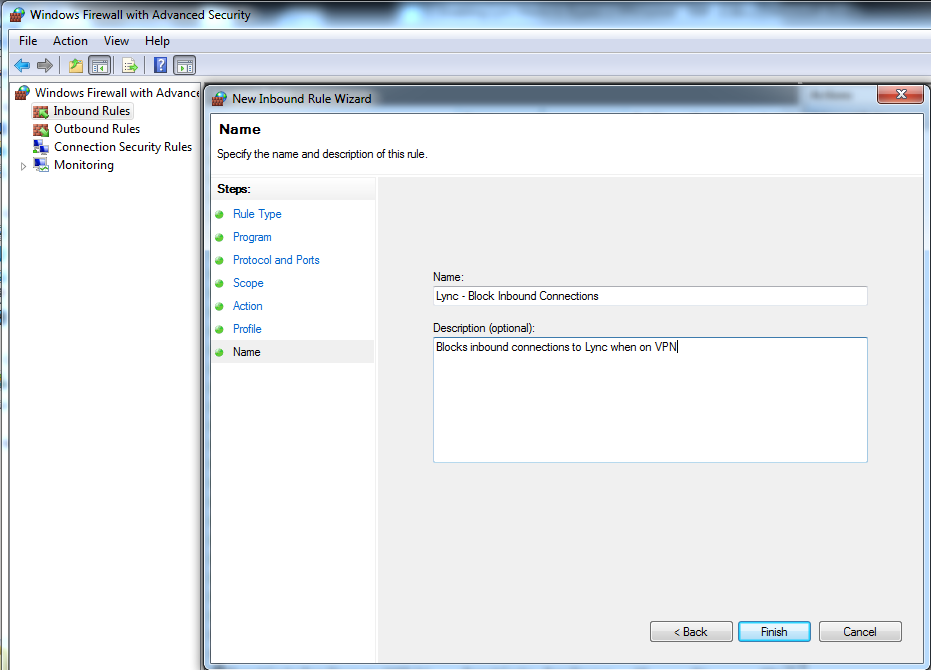 After creating the inbound rule, create an outbound rule with the same configuration.


Because connections to all internal IP addresses are blocked, you must provide valid DNS entries that resolve public IP addresses in response to queries from the Lync client. To achieve this use a dedicated DNS server, with pin point zones as explained in the article Communicator Automatic Configuration and Split-Brain DNS .

The Lync client makes connections to the following resources. You need to provide the public IP addresses back for those requests:

To force the Lync client traffic around the VPN, the public IP addresses for all three Edge services must be returned to the Lync client when it makes a query. This allows the Lync client to connect to the Access Edge as an external client. This is required because users must register as external to obtain proper Media Relay Authentication Server (MRAS) credentials. For more details on MRAS, see Microsoft Lync Server 2010 Resource Kit: External User Access .

Just like SIP traffic, you must block all https pool traffic from entering the VPN. All URLs defined for simple URLs and pool web services (including external web services FQDNs) must return a public IP address routed outside of the VPN tunnel.

Because you are blocking the Lync client from reaching any internal subnets, you must ensure that all Exchange services are reached through their public IP addresses.


When these changes are implemented, the Lync client will connect to the Access Edge Server for all signaling connections when on the corporate VPN (see Figure 10). In addition, media sessions will not be allowed to establish connectivity through the VPN tunnel. Media sessions will be routed through the A/V Edge Server public interface (see Figure 11). 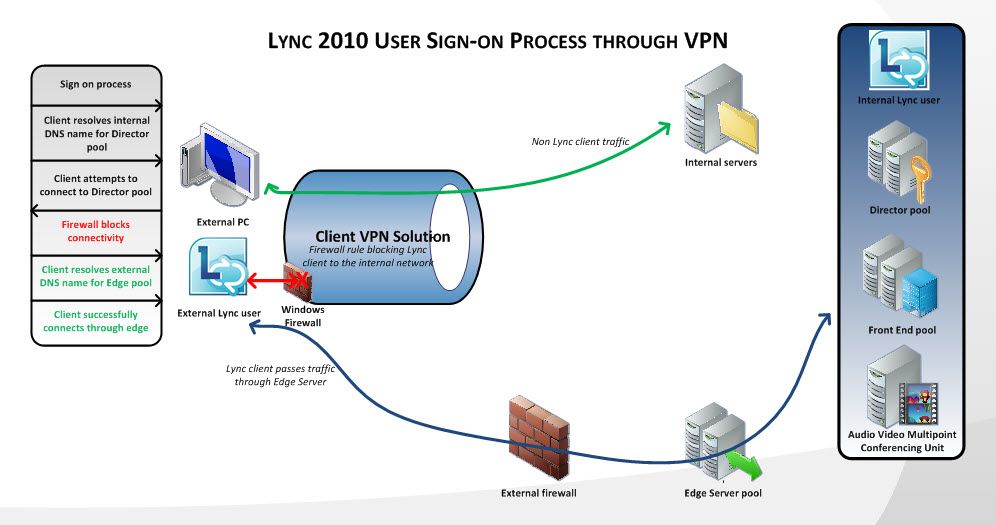 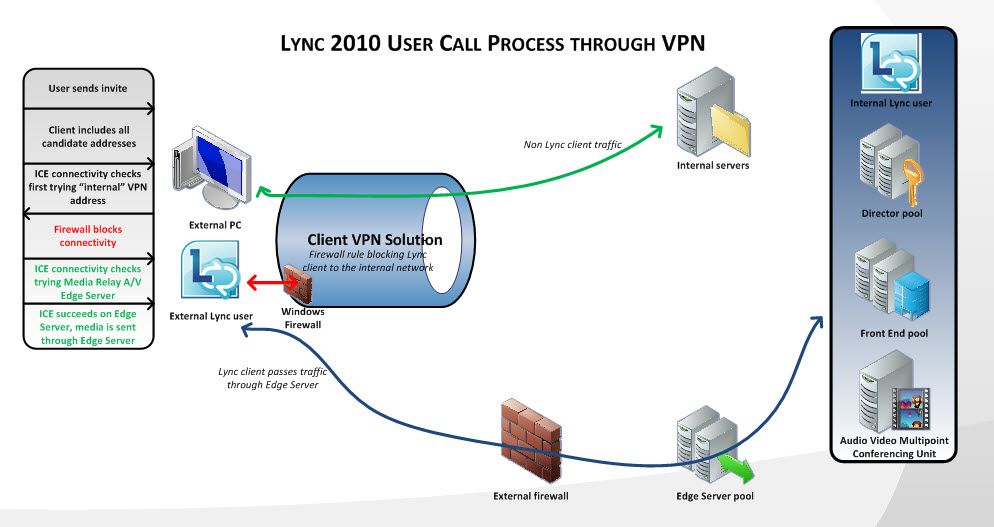