Turn on suggestions
Auto-suggest helps you quickly narrow down your search results by suggesting possible matches as you type.
Showing results for
Show  only  | Search instead for
Did you mean:
Configure Failover Routing with AudioCodes Media Gateways: Part 1
By


Microsoft Lync Server 2010 branch office survivability enables you to create inbound and outbound call routing scenarios to maintain high availability even when access to core Lync Server 2010 services is unavailable due to a WAN failure or other outages. Branch office survivability leverages a Lync Server Survivable Branch Appliance or a Survivable Branch Server paired with one or more enhanced media gateways. This combination provides local Registrar, Mediation, and VoIP to TDM conversion for a branch location.


Part one focuses on the deployment of AudioCodes Enhanced Media Gateways in a configuration that takes advantage of this branch office survivability model. It also accounts for instances where a local Survivable Branch Appliance or Survivable Branch Server is not available due to a hardware or software failure. Designing a local branch office to handle both WAN and local server failures helps ensure that your branch office has continuous access to inbound and outbound call routing services.


The following high-level steps are required to configure failover routing for a branch office that includes the deployment of one or more AudioCodes Enhanced Gateways:


This article is not a detailed deployment guide for a branch office scenario. It focuses on configuration of an AudioCodes Media Gateway to provide PSTN connectivity. This section outlines the reference architecture used to frame this article and the high-level steps needed to define a branch office in a Lync Server 2010 topology.


The majority of branch office deployments use a combination of a Mediant 1000 MSBG and one or more MP-124 devices. The Mediant 1000 MSBG provides PSTN connectivity and the MP-124 devices support the analog devices. Both device types must be added to the Lync Server 2010 topology. Both devices require failover routing configuration to enable continuous use when a Survivable Branch Appliance or Survivable Branch Server is unavailable.


Figure 1 below outlines the reference architecture used to test and validate the AudioCodes failover routing configuration. 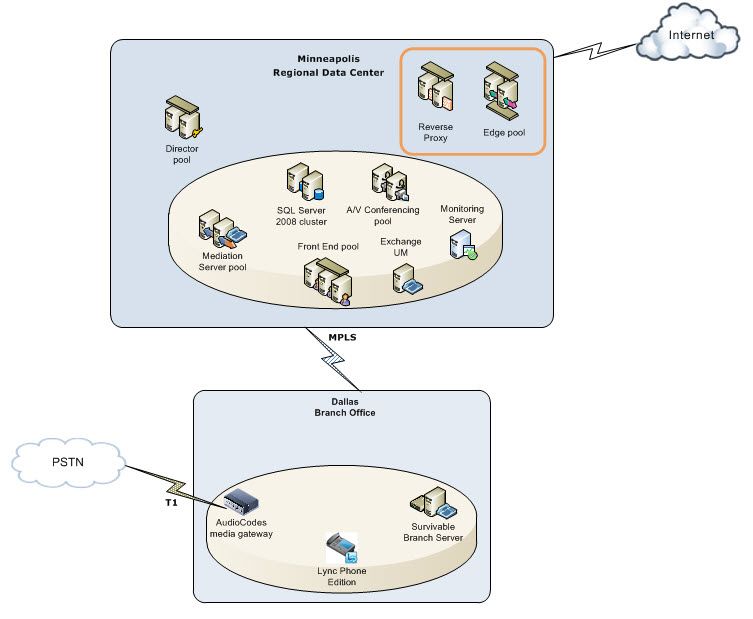 
The Need for Failover Routing


In Figure 1 an AudioCodes Mediant 1000 MSBG is paired with a Survivable Branch Server to provide inbound and outbound call routing through the PSTN connection. If WAN connectivity between the Minneapolis data center and the Dallas branch office is lost, failover routing provides continued voice services for the branch office.


Remember, if the Survivable Branch Server becomes unavailable, failover routing must also provide inbound and outbound call routing. If the Dallas office has traditional PSTN trunking that provides inbound direct inward dialing (DID) and the Survivable Branch Server fails or is unavailable for maintenance, there must be an alternate path for inbound call routing.


Figure 2 shows the alternate call flow if the Survivable Branch Server is unavailable to the Mediant 1000 MSBG Media Gateway component. 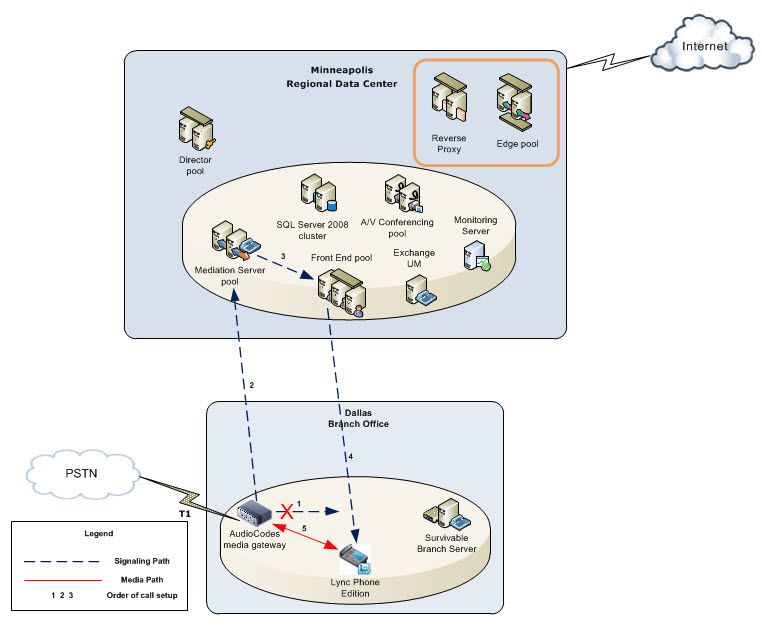 Each Survivable Branch Appliance or Survivable Branch Server runs both the Lync Registrar service and Mediation Server role. This configuration allows the Lync Server Mediation service to process and transcode inbound and outbound media streams locally at a branch office.


This configuration allows the Mediation Server resources, located in the Minneapolis data center, to provide call routing and transcoding as a backup to the Survivable Branch Server components located in Dallas branch office. Lync Server Media Bypass in the branch office eliminates the need for voice media to traverse the WAN connecting the Minneapolis and Dallas offices.


This article assumes that the Lync Server infrastructure in the regional data center is fully deployed and that all Lync components are configured for Enterprise Voice (dial plan, routes, PSTN usages, and so forth).


2. To use a topology that has already been published for your environment select the option to Download Topology from existing deployment .


3. Expand the central site where you want to add a branch site. 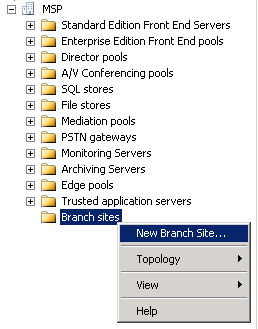 6. When prompted, assign the new branch site a name and description. Define the values and click Next . 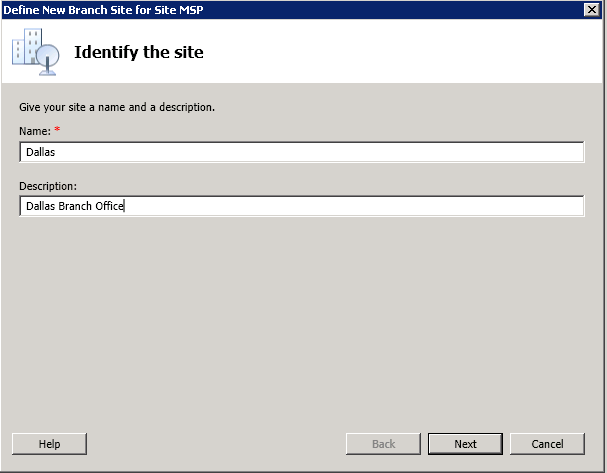 7. When prompted, specify the City, State, and Country for the branch office location. Define these values and click Next . 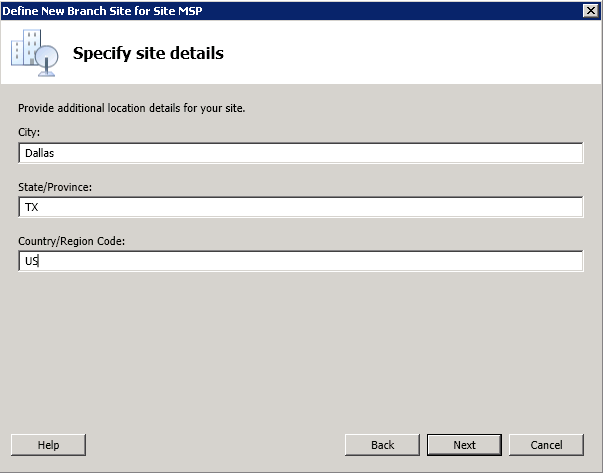 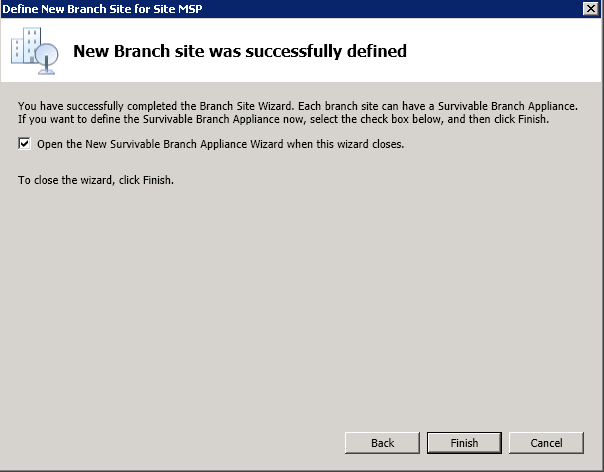 10. The Define New Survivable Branch Appliance wizard will be launched. 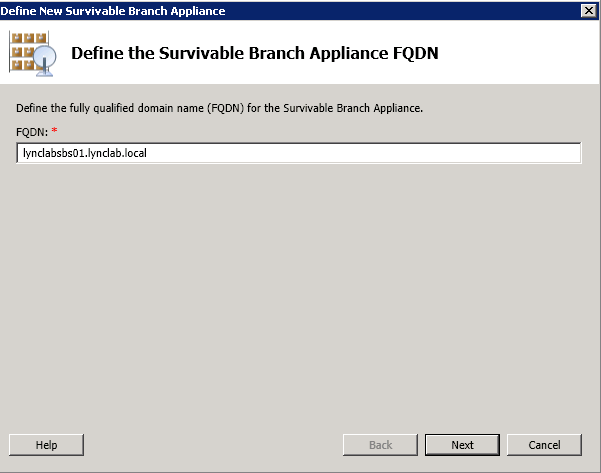 12. Use the drop down to select the Front End pool or Standard Edition server to provide user services for your Survivable Branch Server. User services include services like contact lists, presence information, and web services. These resources are provided using the data center resources that are deployed in your central site.


13. Select the pool that will provide user services and click Next . 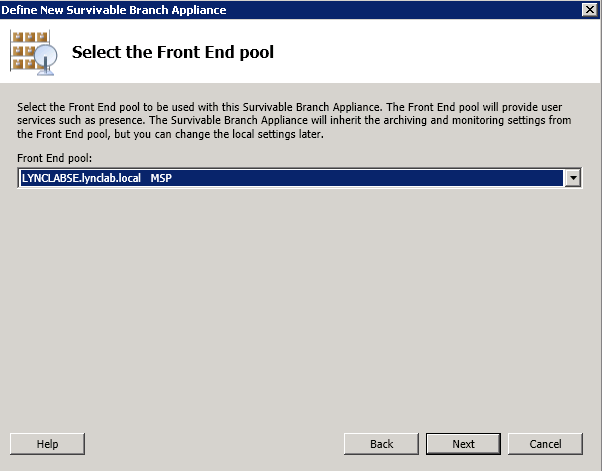 14. Define an Edge Server pool to service the Survivable Branch Server for media connectivity. Use the drop down to select the appropriate Edge Server pool and click Next . Our sample deployment does not contain an Edge server, so this option is empty. 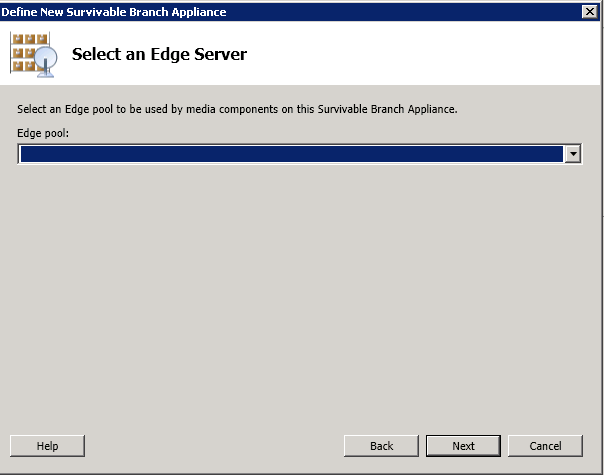 
16. Define the listening port for the PSTN Gateway. This port will accept SIP traffic along with TCP or TLS traffic. Click Next when finished. 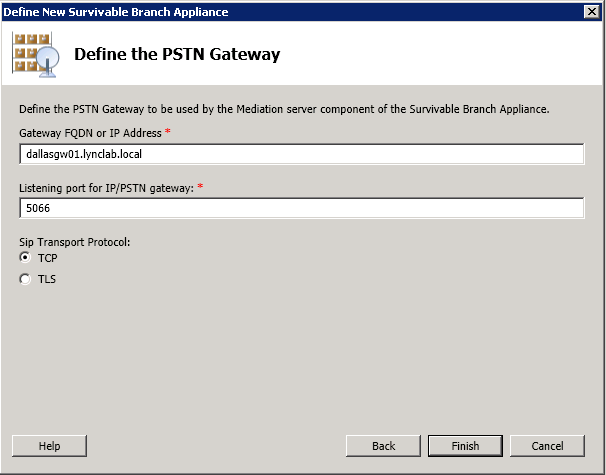 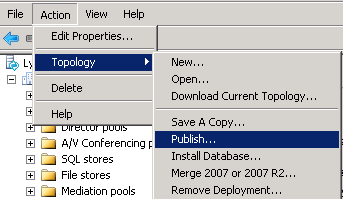 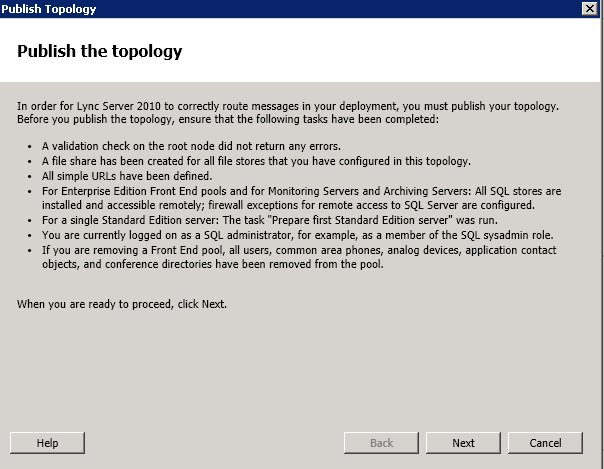 Click Finish when the topology has successfully been published. 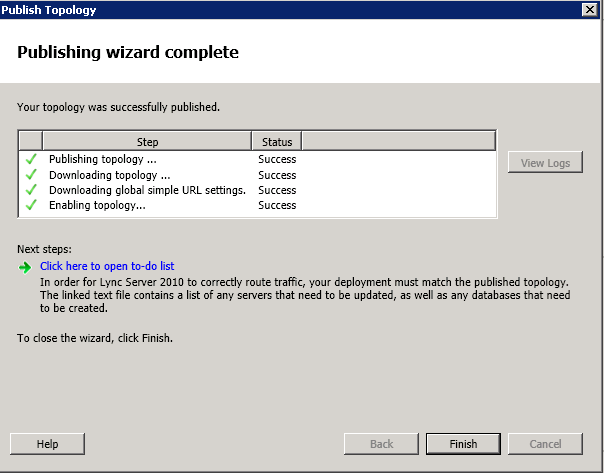