Turn on suggestions
Auto-suggest helps you quickly narrow down your search results by suggesting possible matches as you type.
Showing results for
Show  only  | Search instead for
Did you mean:
Conferencing Policy Settings: AllowIPAudio
By

Do you believe that silence is golden? If so, then we've got a Lync Server conferencing policy setting made just for you.

By default, Microsoft Lync allows you to add IP audio to any online meeting; that simply means that you can use the sound capabilities built into your computer to talk to other people in the meeting. It's just like talking on the telephone, except that you don't actually need a telephone.

For most organizations that's a pretty good deal; that explains why IP audio is allowed by default. However, it's possible that, in other organizations (especially those with limited bandwidth), allowing IP audio in a meeting isn't considered such a good deal. (After all, audio traffic is going to have travel on the same network as the rest of your network traffic.) If that's the case, then we've got a Lync Server conferencing policy setting made just for you.

Oh, right: we said that already, didn't we? Well, here's the setting in question: AllowIPAudio. When AllowIPAudio is set to True (the default value), then you can enable IP audio by selecting Use Lync (integrated audio and video) when you start a meeting: 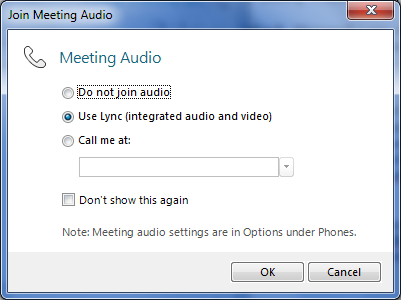 Alternatively, you can add IP audio to a conference at any time simply by clicking the Call menu in the Conversation window: 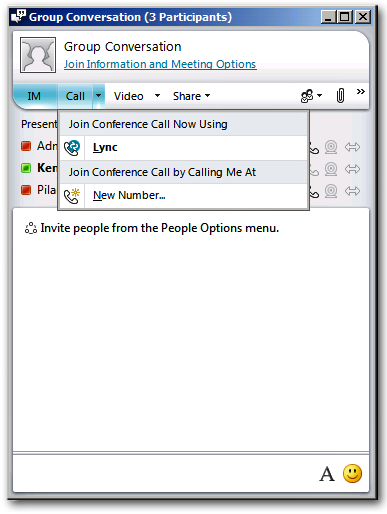 By comparison, if AllowIPAudio is set to False you won't be prompted for the audio source when you join a meeting. (Actually, you might not be prompted anyway, depending on how you've configured Microsoft Lync. But that's another story for another day.) In addition, the Call menu will no longer be available in the Conversation window: 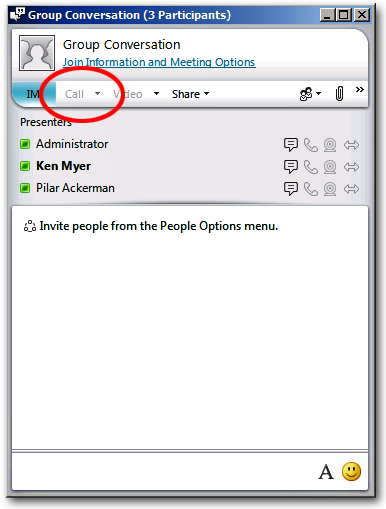 Incidentally, here's how you disable IP audio in a meeting:

And here's how you enable IP audio:

It's important to keep in mind that the AllowIPAudio setting is a per-organizer setting: that means that it applies to the person who organized the meeting (and therefore to everyone else in that meeting). For example, suppose we have two users and two different conferencing policies:

Oh, and here's something else to keep in mind: AllowIPAudio can be used to disable IP audio, but it doesn't prevent people from using telephones and dial-in conferencing to add audio to a meeting. If you want to eliminate audio altogether (or at least Lync Server-managed audio) then you should set the EnableDialInConferencing property to False as well.