Turn on suggestions
Auto-suggest helps you quickly narrow down your search results by suggesting possible matches as you type.
Showing results for
Show  only  | Search instead for
Did you mean:
Terminal Services Per User Licensing Usage Tracking
By

Per user license usage reports can be generated across three different scopes:

1. Domain : Generates a per user usage report across the host domain of a Terminal Services Licensing Server (TSLS)

2. Organizational Unit (OU): Generates a per user license usage report across the given OU in the host domain of a TSLS

3. All Trusted Domains: Generates a per user license usage report across all trusted domains

Reports are accessible through the following mechanisms:

In Windows Server 2008, a new option in the TS Licensing Manager menu named "Create Report" can be used to generate and manage per user license usage reports.

To create a per user license usage report

2. Right-click the license server name for which you want to generate the report, and then select the "Create Report" and "Per User CAL Usage …" options.

3. Select the scope for which you want to generate the report. (These are described above.) 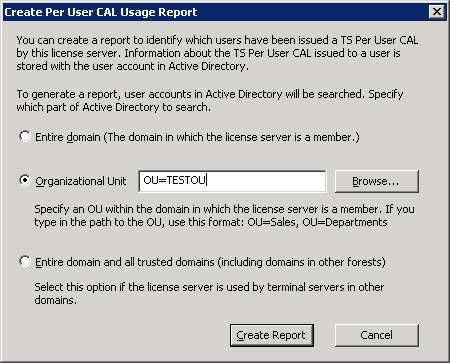 To view summaries of generated reports, use the License Manager UI.

You can perform various operations on the generated reports:

2. The "Save As" option saves the usage report in a readable format. This is useful if you want to check users to whom licenses have been issued. To do this, first generate a report and then click "Save As" to give it a new name. Then open the report to review which users received licenses from that TSLS.

Here’s an example of a usage report: 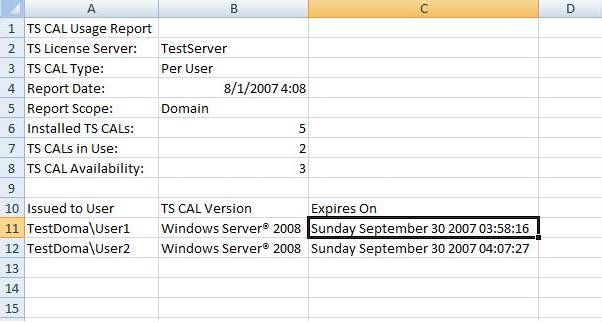 Windows Server 2008 also provides support for managing Per User usage reports using WMI providers. Now, an administrator can write a simple script to generate a usage report for a given scope. Within the script, he can take further action based on the reports. For example, if the number of issued licenses exceeds the number of installed licenses, the script can send an e-mail to the administrator.

The following WMI classes are used to generate reports.

i. GenerateReport: This interface is used for generating per user license usage reports. Reports can be generated across three different scopes as discussed above. This is a static function.

ScopeType: Defines the scope for which the report needs to be generated

ScopeValue: This is used only when ScopeType is "Organizational Unit (OU)",

FileName: This is an output parameter containing the file name of the report generated. This file name can be used to perform other operations on the report like Delete and FetchReport.

ii. DeleteReport: This interface is used to delete an existing per user usage report. This is not a static function and must be called from the per user report object.

StartIndex -> Index to start from

Count -> Number of values to be fetched;

If you need to fetch all entries then set StartIndex=0 and Count=0.

The Win32_TSLicenseReportEntry class provides details of the Per User Licenses issued. This class has three members:

User: User to which the license was issued

ExpirationDate: Expiration date of the license