This is the first in a series of blog topics to introduce you to improvements we have made in RDP in Windows 7 and WS2008 R2 to enhance your audio and video playback experience in remote sessions. Media playback experience has been improved by efficiently transporting audio/video-based multimedia in a compressed format within the RDP protocol. The feature will enable users to experience smooth, reliable playback of multimedia video content played back through Windows Media Player.

If the client supports multimedia redirection, it will receive the original compressed multimedia stream from the server and decode it locally for display. This will decrease bandwidth usage since the data over the wire will be compressed video instead of a succession of bitmaps. Bandwidth usage should be akin to streaming content from a video server or via a video played over a file share. Also, the bandwidth usage remains the same when a video window is resized and even when it's played in full-screen mode.

This method also saves server resources as the server no longer spends its CPU resources decoding the video content and sending it in bitmap form over RDP. As we can see in Figure 1 below, while playing a HD video in a remote session with multimedia redirection, the CPU load on the server is only about 1%. The CPU-intensive processing is off-loaded to the client where the CPU load is about 25% (task manager on the right). Even though the video is rendered on the client, the video content displayed on the screen will be seamless (as though it was rendered on the server). 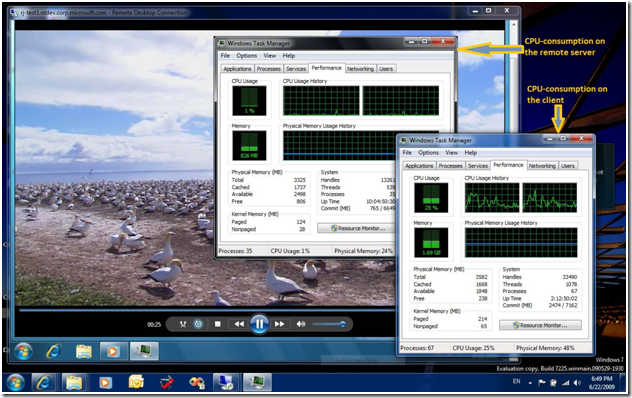 Figure 1. CPU usage when playing back HD video in a remote session

What do I need to experience this feature? 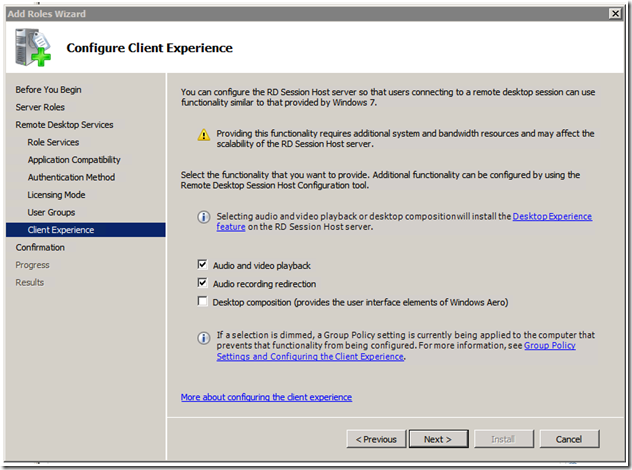 This is a one-step process that allows you to configure the server for audio and video playback redirection during RDS role installation.

You can also experience this feature when you connect to a physical Win 7 Ultimate/Enterprise machine or a Win 7 Enterprise VM. No additional configuration is required on these client machines.

You need an RDP 7.0 client to connect to the remote machine. 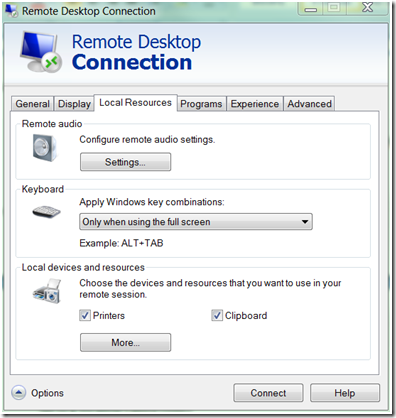 On the next dialog box that appears, select “Play on this computer.” 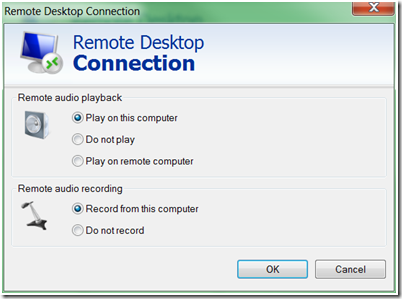 What formats of audio and video are supported by this feature?

Windows Media Player uses the Media Foundation infrastructure to play back content such as WMA, WMV, MP3, DivX, etc., and DirectShow for MPEG-1, MPEG-2, etc. In addition, most streaming media content is played back through the Format SDK (FSDK). Most audio and video content played back through Windows Media Player will be redirected using this scheme as long as the client has the decoder to decode the content. This includes content that goes through Media Foundation as well as DirectShow. In addition, content that is streamed can also be redirected. If the decoders are not present on the client then content will be rendered on the server using the server’s CPU/GPU resources (host side rendering). The compressed bitmaps and audio (see the blog post What’s New in Remote Audio for Windows 7? ) would then be sent efficiently over the network to the client.

Note that DRM-protected content will not be redirected through this mechanism.

Next topic: Configuring your WS2008 R2 server for a rich client experience.