Turn on suggestions
Auto-suggest helps you quickly narrow down your search results by suggesting possible matches as you type.
Showing results for
Show  only  | Search instead for
Did you mean:
Deploying desktop virtualization
By 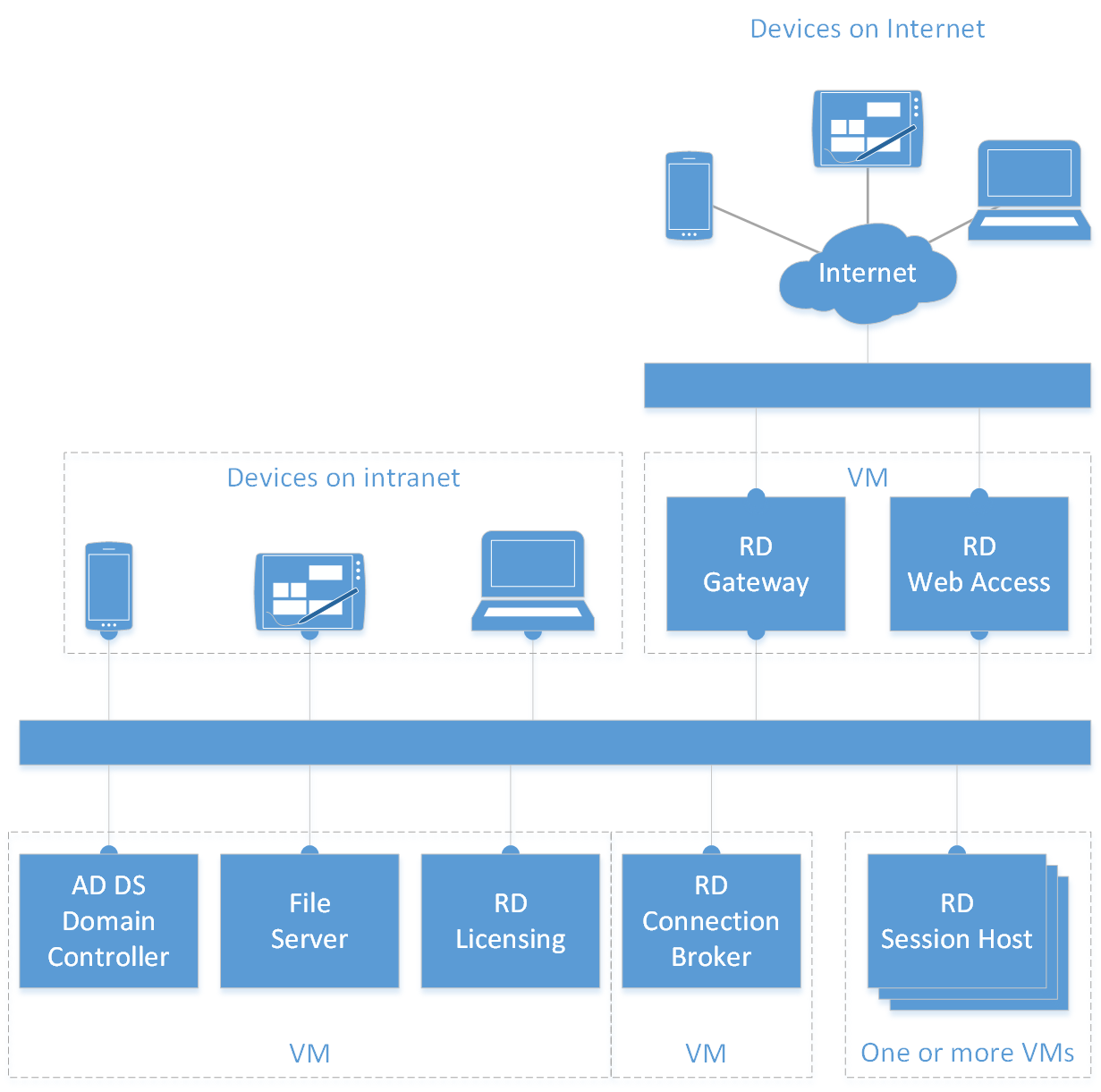 The session-based Remote Desktop Services infrastructure is a prime candidate for virtualization itself. Figure 1 shows which role services can run on the same virtual machine (VM) and which might require one or more VMs.  Of course, for testing purposes, you can run all of these in one or two VMs. However, for production environments, you’ll need to scale out further to support user capacity.

Also, it should be pointed out that the file server in this sample infrastructure is running Windows Server 2012 R2 (required to support SMB 3.0). The file server stores user profile disks, backs up data, and provides shared folders in which users can store data and share that data with other users.

Again, check out the Test Lab Guides for more information about deployment. 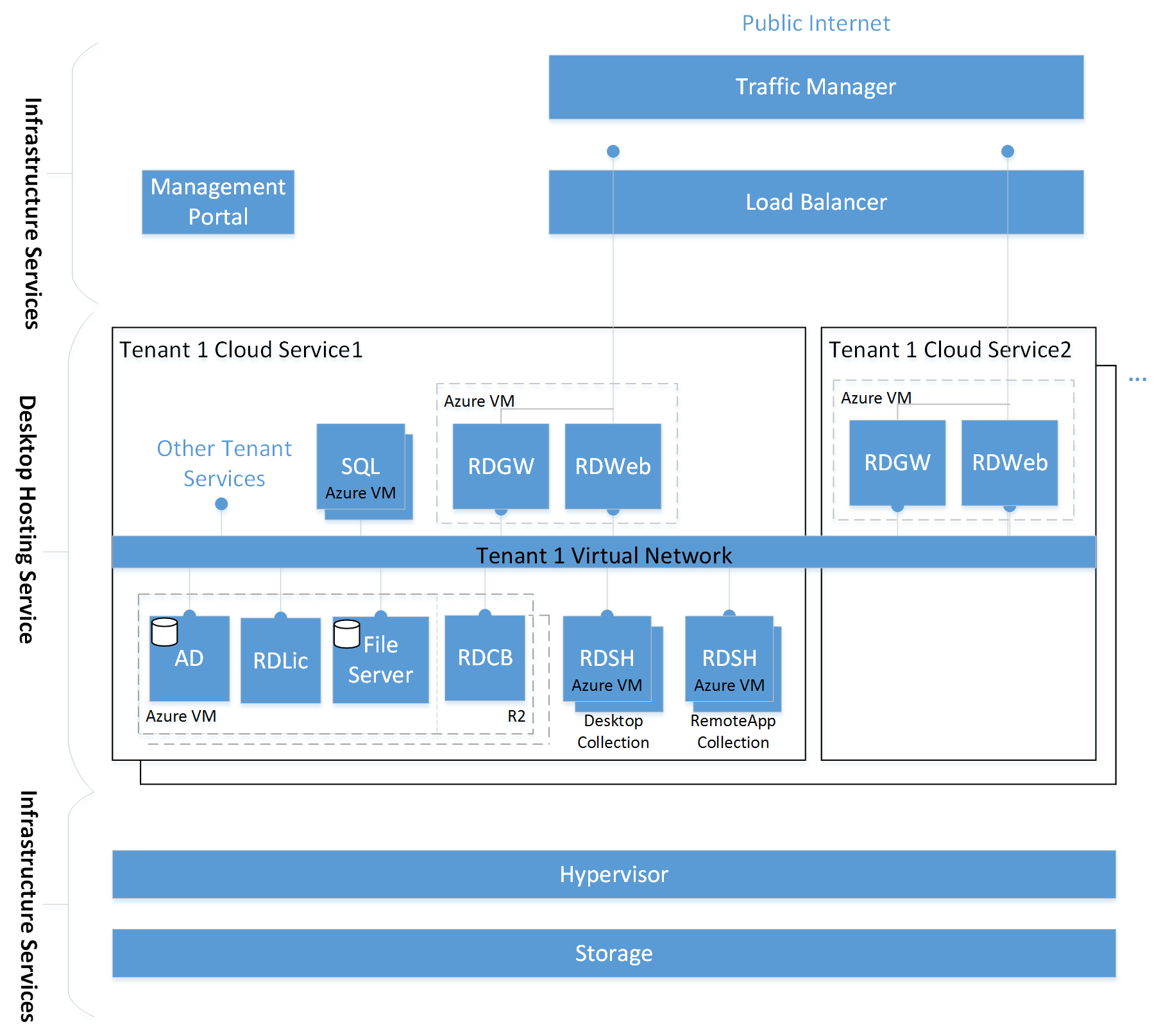 Note that this infrastructure contains multiple instances of SQL Server (which supports the RD Connection Broker in high-availability solutions). Also, if you want to support users in multiple cloud services, you can deploy the Remote Desktop Services infrastructure in one cloud service and the RD Gateway and RD Web Access role services in the other clouds.

When deploying your Remote Desktop Services infrastructure in Azure, consider the following:

A wealth of deployment information about deploying Remote Desktop Services in Azure is available at Azure Desktop Hosting - Reference Architecture and Deployment Guides , which includes the following guides:

As with the Azure deployment model, you will need to synchronize your on-premises AD DS with Azure Active Directory . This synchronization ensures that users can access on-premises or Azure resources by using the same credentials.

You will need also create a virtual private network (VPN) connection between your on-premises desktop virtualization infrastructure and your Azure infrastructure. This connection will allow users to transparently use desktop virtualization on premises or in Azure, and it will allow virtualized desktops in Azure to access on-premises resources. For more information about Azure VPN connections, see Windows Azure Virtual Network Overview and Windows Azure: Virtual Network .

One last deployment topic that I'd like to cover is creating a standard RD Session Host image. Because the recommendation is to use VMs on premises, you can use the same virtual hard disk image for on-premises and Azure deployments. Both System Center 2012 R2 Virtual Machine Manager and Azure support the creation of VM templates, so the idea is to create a VM template in both infrastructures that is based on the same RD Session Host image.

The process is pretty straightforward. Let's take a look at it.

Of course, the big advantage of using this method is consistency in RD Session Host server farms (where you have two or more VMs). You want each VM running RD Session Host within the farm to be identically configured so that users have the same experience, regardless of which VM they connect to.

Another advantage is that this method allows you to quickly "spin up" additional RD Session Host VMs if you need additional capacity. You can always "spin down" or remove the extra VMs later when they aren't needed.

But how do we connect devices to our newly deployed infrastructure? That's the topic of my next blog post! See you then!