Turn on suggestions
Auto-suggest helps you quickly narrow down your search results by suggesting possible matches as you type.
Showing results for
Show  only  | Search instead for
Did you mean:
SQL Server 2016 Distributed Availability Groups for SAP
By

However, please realize that some important commands/steps did not make it into the documentation as of 06/04/2016 yet. These steps are referenced in this blog.

Purely from the technical side the idea is to couple independent AlwaysOn Availability Groups together by:

Since every one of the independent AGs runs on their own Windows Cluster configuration, quorum decisions are made independent from each other in the particular AGs. The Windows versions these different AGs are hosted on can be different. Means these concepts could be used as well for upgrading to a new Windows release the AG is running on.

However, when you look into the graphics at the head of the article about Distributed Availability Groups, the scenario is not really what you as a customer might have asked for. All you really wanted is a single instance/replica in the DR site and not two of them. A scenario of configuration a lot of SAP customers implemented which basically looks like this: 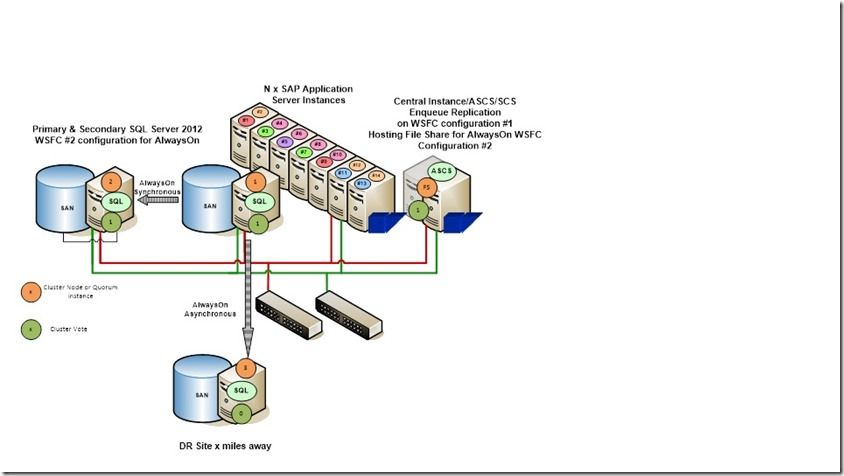 No problem. We can use Distributed AGs for such a classical three replica scenario as well.


Scenario we want to cover


So the scenario we want to cover would need to cover one AlwaysOn AG in the main site which under normal operation conditions will run one primary and one secondary replica. Both with synchronous replication of the data. In the DR site we only want to run one single secondary replica that is getting asynchronously synchronized. The overview of the desired configuration would look like:

On the left hand side, we have the AG in the main site which usually runs the primary and the synchronous secondary replica. We will refer to that AG throughout the article as the ‘first AG’. Whereas in the DR site you have an independent AG (we will call ‘second AG’) with a single replica that is supplied out of our AG in the main site.

So let’s go through the necessary steps to be done in order to create this scenario with Distributed Availability Groups.

Step #1: Create the AG in the Main site.

There is nothing special in this step. You can create this AG as before with support of the wizard in SSMS or manually with T-SQL commands (don’t forget to create the hadr_endpoint and the XEvent Session if you do so). We would recommend to enable database health checks with the AG as well. Also if you want to use automatic seeding, don’t forget to grant permission to create a database on the secondary node. If you want to have compression used for the automatic seeding, don’t forget to set traceflag 9567 on the primary instance ( https://blogs.msdn.microsoft.com/saponsqlserver/2016/05/02/sql-server-2016-alwayson-for-sap/ ).

Step 2: Create a single node AG in the DR site

Let’s assume you got a Windows Cluster configuration setup already. This could be a setup with two nodes and a fileshare quorum as shown above or any other configuration you got in the DR site already. SQL Server 2016 is installed on one of the nodes and in SQL Server configuration, you enabled the usage of the Windows Cluster for AlwaysOn already. Creating an AG with a single replica is not possible with the wizard in SSMS. Hence we need to create the AG with a single replica by T-SQL commands. Make sure that you created the hadr_endpoint and the XEvent Session on that SQL Server instance (we usually script those from another instance and adapt the names). The command to create the single replica for the instance looks like:


We can highlight two new components to the command:


You also realize that there is no database named that should be part of the AG. That part will be done later through the Distributed AG.

After the AG is created, create an AG Listener on top of the second AG. After that, check whether the listener works by connecting through the listener name to the instance.


Remarks to this command:


After this command executed successfully, refresh the item ‘Availability Groups’ in SSMS and you will see that there are two AGs listed as shown (in this case we called the first AG sapalways123 and the distributed AG sapalwaysdistv3) here:

However, properties or dashboard of the Distributed AG is not working yet in SSMS.

Step 4: Join the ‘second AG’ into the Distributed AG

Now it is time to get to the ‘second AG’ in the DR site. On the primary and in our scenario only replica in the ‘second AG’, we need to join the Distributed AG. This is done with this T-SQL Command:


Looking at the command, it has a similar structure as the command initially creating the AG. However, we ‘join’ the AG with this command (second line). Again we define the listener_url with the two information pieces of listener name and hadr_endpoint port.

After this command is executed, we expect:

So, in the background you see the dashboard for our ‘second AG’ in the DR site, that tells that you are on the primary (and only instance). Yet since it is part of the Distributed AG, the database is not accessible since the only real accessible primary replica is active on the ‘first AG’ which represents our Main datacenter.

But there is a solution for testing this scenario. You can ‘demote’ the ‘first AG’ into a secondary role before executing the failover command. For this purpose, the following command needs to be run on the primary of the ‘first AG’ (Main site):


If this command is executed on the primary of the ‘first AG’, the primary database closes and with it does not respond to your workload anymore.

NOW you go to the primary of the ‘second AG’ (DR site) and execute the failover command which needs to look like:


With this command your primary replica in the ‘second AG’ will open and will turn around the replication direction. Means you are now operating with that primary out of the DR site and replicate the data back into the Main site (think about the DR test case).

After the ‘controlled’ failover to the DR site with switching the ‘first AG’ to a secondary role, the replication flow would look like:

As we want to revert our failover tests, we execute the commands in exactly the reverse order. This time we ‘demote’ the ‘second AG’ to a secondary role by issuing this commend on our current primary AG:


And then issue the failover command on the current secondary AG:


With these commands, you basically fall back again to the ‘first AG’ as primary AG.

The first change would be that the command for creating the DAG would have the SEEDING_MODE set to ‘MANUAL’ instead of ‘AUTOMATIC’. This change will prevent the automatic creation of the database(s) of the ‘first AG’ into the primary of the ‘second AG’.


This command should attach the non-recovered database to the ‘second AG’ and synchronize with the primary on the ‘first AG’ for a last catch up of the data that has not been yet backed up in transaction log backups. In order to see whether this step was successful, use Object Explorer and check the Availability Databases of the ‘second AG’ (saplaways456 in our example below). 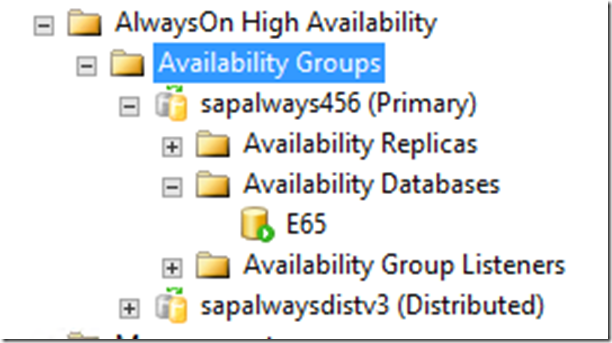 The picture should look like this. You will not find an entry under ‘Availability Databases’ in the DAG (sapalwaysdistv3 in our example).

The order or sequence is important. The DAG needs to exist before you try to join the non-recovered database into the ‘second AG’. Otherwise you will get the error message that a database in that state can’t join the AG.


Some considerations and some remarks


If we compare the scenario and the configurations we used so far to cover a scenario of local HA and far distanced DR site with the one described above, we note some differences.

We talk about the following parameters:

If you read through this article where we describe how to cover the scenario of local HA and far distanced DR site with Distributed AGs, it becomes clear that you have an AG listener for the ‘first AG’ and a separate listener for the ‘second AG’. There is no possibility to define an AG Listener for the Distributed AG. As a result, your process in case of a failover of a SAP system changes. Before you never had to change the parameters above when failing over. But now you need. If you initiate the failover process, you need to change all these parameters above to the AG Listener of the ‘second AG’. That needs to be part of the failover process. 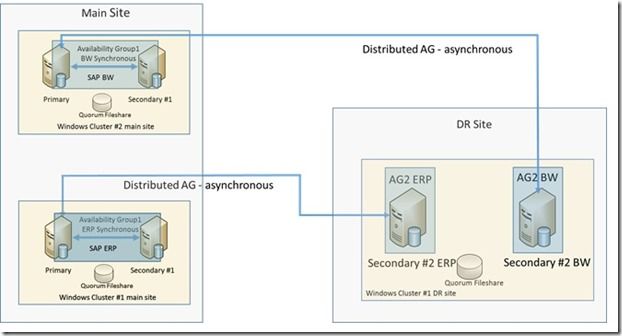 So we are using our Windows Cluster configuration in the DR and its nodes as hosts for multiple ‘one replica’ AGs.

Another possibility that opens up for customers who have QA systems that are a mirror of the production infrastructure. In those cases, not only the production system is using AlwaysOn, but the QA system as well. In these cases, Distributed AGs allow to host the DR node in the same cluster with the QA system and eliminate the problem of embedding that node in the cluster on the main site. It also would allow you to run the ‘second AG’ on a separate SQL Server instance one of the QA database nodes and with that not even having the need to invest into a separate node.

Well, that is for this part. There are some more exiting configurations we can build with functionality in AlwaysOn of SQL Server 2016. But these will be part of another article.
0 Likes
Like