Benefits of the column-store for SAP BW

A column-store index has many benefits: The administration of SAP BW is much easier, since you do not need to maintain any BW aggregates any more. The disk space usage is much smaller when using column-store indexes and the BW query performance is much better.

We have seen significantly increased BW query performance when using a column-store index in our test lab. There was a wide spread of performance increase, dependent on the data and type of query. Some queries were up to 50 times faster, while others did hardly benefit from the column-store index. The majority of the BW queries we tested ran about 3 to 5 times faster. However, we expect even better results with real customer data. The data in our test cubes was often artificially created and did not have any relation between the different characteristics, which prevented optimal compression and performance.

The fact tables on SAP BW cubes have one database index per dimension. All these indexes are dropped, once we move the data into the column-oriented store by creating a column-store index. Dependent on the number of dimensions you save a lot of disk space when using a column-store index. We have seen space savings of 50% and more, even when comparing with fully PAGE compressed fact tables.

No need for aggregates

The column-oriented store in SQL Server 2012 is read-only. Therefore you cannot modify the data of a table as long as a column-store index exists for this table. Before loading data into the table, you first have to drop the column-store index. After the data load you should re-create the column-store index in order to optimize the query performance again.
This behavior perfectly fits to the e-fact tables of SAP BW cubes. In SAP BW each cube has 2 fact tables. The F-fact table is optimized for data load, while the E-fact table is optimized for query performance. Data can be loaded the whole day into the F-fact table. However, the E-fact table is only modified during a process called BW cube compression, typically running at night.

In order to speed-up the cube compression, additional improvements have been implemented in the BW compression code. Index creation is performed using SQL Server parallelism (per default 8 threads for creating the column-store index). A MERGE statement is now been used also in SAP BW 7.00 (This feature was down-ported from SAP BW 7.11). In addition, a SQL Server optimizer hint (HASH JOIN) is used in the MERGE statement.

The next SAP BW support packages will contain several improvements. The code for the index maintenance (cube activation, index check, index repair, update stats), cube compression and repartitioning was standardized for all SAP BW releases (7.00 to 7.30). Further new improvements have been implemented. This code base is also needed for using column-store indexes of SQL Server 2012 with SAP BW. The new code will be delivered in the next SAP support packages in August/September 2012:

* SP 10 is sufficient for using column-store indexes with SAP BW 7.11. However, SAP may not generally support SQL Server 2012 for BW 7.11 at the point in time when SP10 is released.

These SPs do not contain any user interface to define a column-store index. The next but one SP (e.g. SAP BW 7.00 SP30) will contain the report MSS CSTORE , which has the look and feel of MSSCOMPRESS. With MSSCSTORE you can view and modify existing cubes by creating the column-store index in dialog or in an SAP batch job. In the meanwhile you can use the lightweight report Z MSS CSTORE , which will be delivered using an SAP note.

With the next SAP BW support package, the index layout for SAP BW cubes changes slightly on Microsoft SQL Server. All new cubes will be created with the new layout. All existing cubes can be adjusted by using SAP transaction RSA1 ("Manage cube" => "Performance" => "Repair DB indexes") or by SAP transaction RSRV ("All Elementary Tests" => "Database" => "Database Indexes of an InfoCube and Its Aggregates"). However, repairing the cubes is typically not necessary. The indexes will be adjusted automatically when creating indexes within a BW process chain.

The field order of the P-index (on the F-fact and E-fact table) has been changed. It now starts with the time dimension, which is used in almost all SAP BW queries.

For the dimension tables, single-column indexes had been introduced with SAP BW 7.11. This has also been down-ported to SAP 7.0x. These indexes can improve query performance. However, data load may slow down (during SID generation). Therefore a new feature was implemented: The single-column indexes of the dimension tables are dropped in a BW process chain at the same time as the indexes of the F-fact tables. They are re-created again at the end of the process chain.

On the E-fact table there is a non-clustered column-store index on all table fields. The index is visible in the SAP data dictionary and has the name "CS". Besides the column-store index, there is only one other index on the E-fact table: The P-index on all dimensions of the cube. The P-index is a unique, clustered index, having the time dimension as first field.
A column-store index will only be created on basis cubes, not on aggregates. It will also not be created for transactional cubes. Of course, it will not be created when running on SQL Server releases older than SQL Server 2012.

Creating a cube with CS-index

In report ZMSSCSTORE you can define the use of column-store indexes for an individual BW cube or all BW cubes. You can choose one of four different options and then press EXECUTE (F8).

Turn on CS-index for a single cube

The individual cube (CUM_BT) is marked to have a column-store index. However, the column-store index is not created at this point in time (you have to run RSA1, RSRV or a process chain later). The aggregates of this cube are immediately deactivated.

When creating or repairing the indexes of any cube in the future, a column-store index will be created. In addition, these cubes will be individually marked to have a column-store, too. When setting "Process all BW Cubes", the content of the field "Process single BW Cube:" is ignored. Be aware, that all aggregates of all cubes are immediately deactivatied.

The global flag for column-store indexes is turned off. This does not have any effect on cubes, which are already individually marked to have a column-store. The aggregates of any cube are not touched. Deactivated aggregates are not activated again.

Turn off CS-index for a single cube

The column-store definition for an individual cube is removed. However, this has no effect as long as the global flag is turned on. Deactivated aggregates of this cube are not activated again.

Here is an example of the index definition in SE11 for an E-fact table having a column-store index: 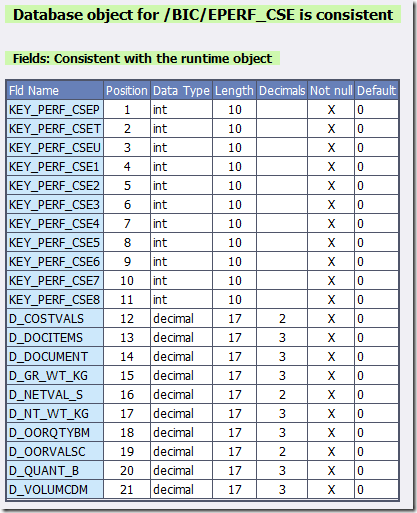 A similar cube without column-store index looks like this:

There are a few restrictions you should be aware when using column-store indexes with SAP BW:

The Remodeling is a very seldom activity in SAP BW systems. In order to use it, you first have to remove the column-store definition for affected cube and re-create the database indexes.