Turn on suggestions
Auto-suggest helps you quickly narrow down your search results by suggesting possible matches as you type.
Showing results for
Show  only  | Search instead for
Did you mean:
SQL Server 2012 Column Store Deployment Accelerates BW Queries and Improves Storage Efficiency
By

This blog describes how Homepro (http://homepro.co.th), a large Retail chain in Thailand  implemented SQL Server 2012 Column Store on their BW 7.30 system and the benefits the customer realized both in terms of Load and Query Performance and storage savings. 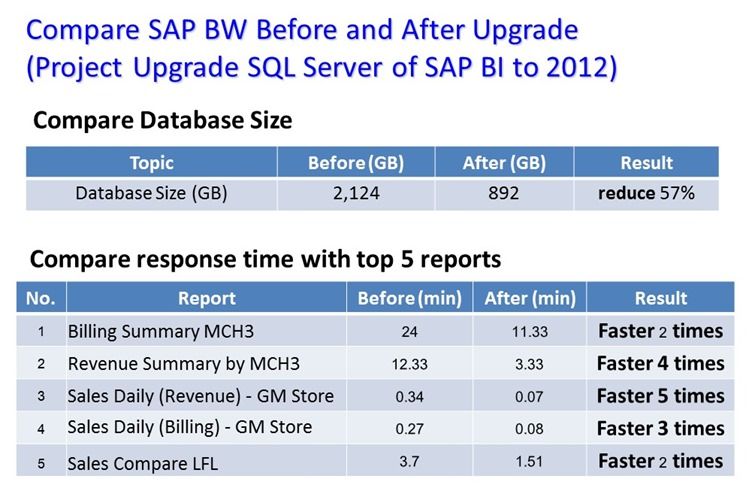 Query Performance is significantly improved due to several factors:

1. Column Store format is dramatically more efficient for some queries that reference only a small proportion of the columns

Query is only referencing a small number of the 100 possible columns.

All columns are the same length in this example

The query only accesses 5 of the 100 columns in Table “A”, therefore only 5% of the data is retrieved.

Row storage formats require the DBMS engine to retrieve the entire row, all 100 columns even though the query only accesses 5 columns

2. Column Store Compression is very efficient, even more so than PAGE compression and greatly reduces the size of the objects on disk.  Therefore the query not only retrieves much less data because only the columns that are needed by the query are returned, but the compression is reducing the data even further

3. SQL Server Column Store technologies can also cache objects in RAM rather than disk.  Accessing Columnar data out of RAM is hundreds to thousands of times faster than mechanical disk

The performance gains at Homepro are summarized in the slide above. SQL Server Column Store feature will improve performance greatly on BW loads and queries with a high percentage of their runtime spent in DB operations. Column Store will only be able to reduce the time spent in the DBMS related processing. Different reports can have very different ratios between the times spent processing on SAP BW application side and time spent in the DBMS backend. This also was the case in HomePro where different ratios of time spent between SAP BW application layer and DBMS backend were influencing the percentage gains by column store.

SAP supports SQL Server 2012 Column Store on all SAP BW releases from 7.00 to 7.40 and above.  The enhancements to integrate with SQL Server Column Store are delivered in SAP Support Pack Stacks.  SQL Server 2014 is being tested by SAP currently (May 2014) and the same Column Store functionality is available for customers today.

Homepro implemented the following procedure on their SAP BW systems:

11. Compare results before vs. after Column Store, compare DB size

13. Verify that Process Chain runs as fast as or faster than before Column Store

15. Repeat procedure and then change system default to Column Store

Homepro were able to convert E Fact cubes with 500,000,000 rows to Column Store in less than 30 minutes.  The exact throughput depends on the exact design of the cube. Process Chains are considerably faster as the creation of the Column Store index on the E Fact table is at least 2-3 times faster than conventional secondary indexes

1. SAP on SQL Server systems so far always have the global Max Degree of Parallelism set to 1.  This is true on ECC 6.0, SCM, CRM and BW systems.  SAP BW queries and index creation may benefit from Degrees of Parallelism higher than 1, however the global value must always be set to 1. SAP BW supports two RSADMIN parameters set with SAP_RSADMIN_MAINTAIN - MSS_MAXDOP_QUERY and MSS_MAXDOP_INDEXING.  This functionality is explained in SAP Note 1654613 - SQL Server Parallelism for SAP BW and this blog Performance of index creation

4. If required SAP BW aggregates can be created on Column Store cubes.  This may be beneficial on very large BW cubes SQL Server Column-Store with SAP BW Aggregates

Homepro streamlined business processes such as setting up new products and SKU by implementing workflow.  Homepro has an ambitious growth target for the next two years and plan to run 100 stores within Thailand and more stores internationally.

1. Column Store is simple and easy to deploy. Recent SAP support packs contain all the related functionality and there is a simple administration program called MSSCSTORE

3. Query performance at Homepro was greatly improved by Column Store allowing Homepro to continue using existing servers for another 1 year

4. Homepro are upgrading servers to powerful new IvyBridge EX servers with FusionIO cards and 2TB of RAM and will deploy Windows 2012 R2 and SQL Server 2014

6. Homepro has changed the default setting for SAP BW to Column Store for all new cubes.  Implementation has been smooth with no problems encountered so far