Turn on suggestions
Auto-suggest helps you quickly narrow down your search results by suggesting possible matches as you type.
Showing results for
Show  only  | Search instead for
Did you mean:
SQL Server 2012 AlwaysOn – Part 5 – Preparing to build an AlwaysOn Availability Group
By


Version 2.0 of article. Please note the changes around modification in the Stored procedure referenced to earlier and a new Stored Procedure which now is attached to the article


Since we covered different architecture we can use between AlwaysOn and SAP, we want to look into creating our first Availability group from scratch. We assume that we have a new installation of SAP which we just installed on one DBMS Server. The ASCS/SCS is installed already in the clustered configuration you wanted to have. There also is at least another database server instance running SQL Server 2012 on a different node which will be used as an instance running a replica for our Availability Group. The other server node is in the cluster configuration you want decided to setup for your WSFC configuration which should host the AlwaysOn Availability Group.


Based on some SAP customer feedback we will focus in this article in how to prepare and synchronize the databases on the different replicas so that one can start to create building the Availability Group. Part #6 of the series then will describe the actual creation of the availability group with part #7 describing what is going on behind the scenes when creating the Availability Group. As we will see, the way how to synchronize the logins between the different replicas does need some attention with SAP installations.


In order to have SQL Server AlwaysOn running smoothly one needs to make sure that the fixes of the following Microsoft QFEs are applied to ALL the server nodes which are participating in AlwaysOn.


For a list of general recommended Fixes for clustering, which we automatically recommend for AlwaysOn usage as well, please check these articles and if necessary apply those QFEs if not yet included:


Before moving to the SQL Server part, make sure that the Cluster Validation Wizard runs without issues. Or just giving warnings we discussed in earlier parts. Dependent on the cluster configuration you can de-select the disk tests from running if the WSFC configuration doesn't have shared disks at all.


Preparation on SQL Server 2012 side


In order to perform this step, you need to open SQL Server Configuration Manager. Check for the service of SQL Server 2012 RDBMS, mark it and right click to open ‘Properties’. Change from the tab ‘Log On’ to the tab ‘AlwaysOn High Availability’ and you'll see the screen below: 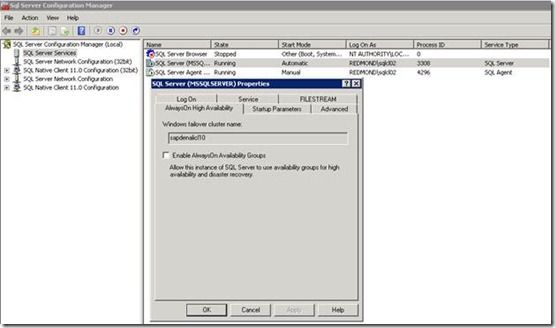 Check the box in front of ‘Enable AlwaysOn Availability Groups’ and press Apply. You will then need to restart the SQL Server service. Hence this is not an online configuration setting.


After the restart, SQL Server 2012 knows the Cluster to use as framework for AlwaysOn.


Initial Synchronization of the databases


In the process of creating an Availability Group, SQL Server does offer to perform the initial database synchronization. This would be done by performing a backup on the server we are working on (assumed to be the primary replica initially). That backup would then be restored to the secondaries. However given the fact that we usually are talking large SAP databases of quite a few TB in size, we recommend to perform the synchronization manually. In order to do that you need:


· The exact same LUN configuration on the secondaries as there is on the primary side. This relates to drive letter/mount points. Ideally the same sizes/volumes available on the LUNs since extending the size of data files are transmitted as well and need to be executed on each of the secondaries as well.


· While copying and restore of the backup is going on the primary and the future secondaries, we need to perform transaction log backups which are getting copied to the future secondary replicas as well. It is best to use Log-shipping for performing this. Only thing is that the restore job on the secondary replicas would need to be disabled for the time the database backup is getting restored


· After the restore of the initial backup on the secondary servers is done, the transaction log backups need to be restored. In case of having Log-shipping established between the primary and the different secondaries, enabling the Log shipping restore job on the secondary will take over the task of restoring those logs. Dependent on the time it took to copy and restore the actual backup, this catch-up by restoring Tlog backups can take some hours. Using Log-shipping for this process does have the advantage that the secondaries are kept synchronized for longer time or up to the time where one can take a downtime to create the AlwaysOn Availability Group.


For the restore, please don't recover the databases. The databases need to remain in non-recovered state. In order to do so please go to the ‘Options’ pane and change the default of ‘Restore with Recovery’ to ‘Restore with Norecovery’ as seen here:

Second step after the databases on the future primary and the future secondaries are in sync is to make sure that the SQL Server logins (visible in sys.server_principals) are created in each of the other instances supposed to run replicas and are matched correctly to the users in the SAP database.


SAP creates a special login which is mapped into a user within the SAP database. That user will own a schema within that database. In that schema we are supposed to find the tables, views, stored procedures of the SAP schema.


In our example, we have a SAP ABAP system with the SID=E64. Subsequently we have the following logins created when installing SAP against SQL Server:


For SAP Java instances, there will be no <sid> login, but a SAP<SID>DB login which is created and which will be mapped into the SAP database as explained below with the example of an SAP ABAP stack. Review OSS Note 1294762 - SCHEMA4SAP.VBS if the SAP SQL users in the primary system are not configured correctly.


The first two logins are mapped into the sysadmin role which automatically will map them into the dbo schema of the SAP database. A schema where no SAP objects are existing in. 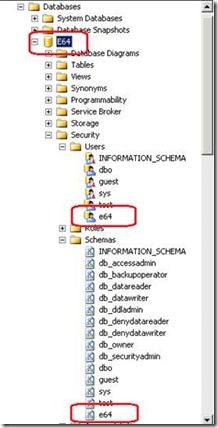 The user e64 in the database E64 would look like this: 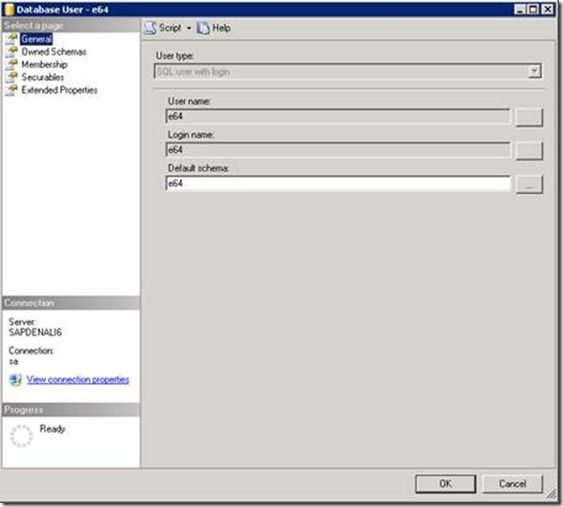 
To check whether the ownerships are fine can also be check with this SQL statement:


The result of this query in our case (SID=E64) looks like:

As you can see in the query above the link between the login mapped into the database is the column ‘sid’ which contains a GUID. The value needs to be the same in the sys.server_principals (master database) table containing the logins and sys.database_principals in the SAP database. If the result comes back empty, then this linkage is broken and the SAP application will not work.


In order to generate the logins necessary for the SAP application on the instances which are supposed to run replicas, DO NOT create them manually, but perform these steps:


The key difference between you creating the logins manually and executing the commands created by the script is that the ‘create login statements’ of the script will create the logins with the exact same ‘sid’ value as found on the principal server. Means there is a match between the ‘sid’ values in sys.server_principals (in master database) and sys.database_principals (in the SAP database)


In the first version of the blog we referenced a similar procedure which is released with this KBA: http://support.microsoft.com/kb/918992/


However that Stored Procedure fell a bit short on functionality and did not script and transfer server level permissions, server role assignments and database assignments of the account. These shortcomings are fixed with the new Stored Procedure attached to the version 2 of this article.


On the SAP Java side, Java instances running on JVM 1.4.xx will not be able to benefit from AlwaysOn since the older JDBC driver did not get changed to work with AlwaysOn configurations. The new JDBC driver 4.0 from Microsoft will be necessary to leverage AlwaysOn for Java. Means only Java instances which are running on JVM 5 and 6 will be able to benefit from AlwaysOn in SQL Server 2012 once SAP releases support for the Microsoft JDBC driver 4.0.