In the fourth part of the series, we are looking at a last reference configuration before moving to the actual doing part. In regards to terms and basics it might be very helpful to read the first part of the series here: http://blogs.msdn.com/b/saponsqlserver/archive/2012/02/07/sql-server-2012-alwayson-what-is-it.a...


As a last reference architecture we want to look at the underlying WSFC aspects if we are looking into a configuration where we distribute the productive SAP ERP system over two sites that are close enough to allow AlwaysOn to run in Synchronous Mode. Current technologies easily allow for data centers more than 50 kilometers (30 miles) apart when using dedicated Dark Fibre (DWDM) links.


A typical case like this was resolved in a so called Geo-Cluster configuration which required storage replication or the usage of SQL Server Database Mirroring for the SQL Server side.


A typical configuration as we deployed with customers looked like: 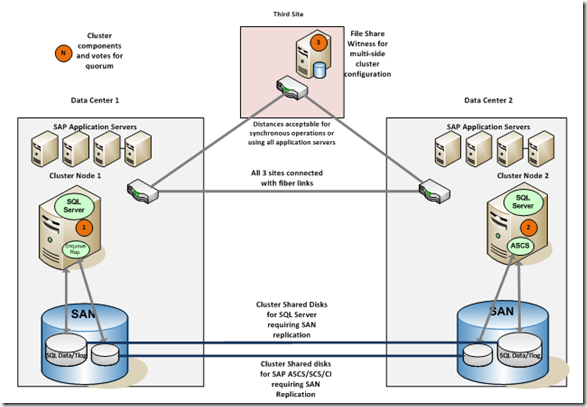 Or with some customers who use Database Mirroring in such scenarios, we can find this type of configuration: 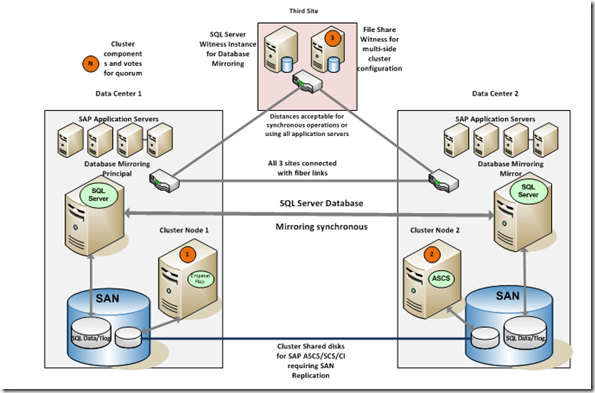 
What different customer configurations do have in common is that the two sites are both active sites with SAP single point of failures being clustered between both sites. SQL Server is either clustered as well or synchronous/asynchronous DBM is used to synchronize both sides. In case an automatic failover is desired, the ideal configuration for DBM would be to have a 3 rd site with a witness instance as shown in the configuration before.


Considerations for using AlwaysOn in such a configuration


The usual implementations are more or less combinations or variations of what we discussed as first reference architecture, except that we look at two sites instead of one site. In order to have these configurations working the two SAP and SQL Server components are using a single subnet or using a virtual private network. As mentioned in Part1, WSFC and now SQL Server 2012 could handle different subnets, but the SAP ASCS and application servers cannot handle the Message Server IP address changing without completely restarting all application servers. Hence running SAP components, especially ASCS/SCS clustered with nodes in both sites, one subnet or one VLAN needs to be provided.


To reduce such configurations down to two sites would require a decision where to place the quorum vote, independent of whether it is a file share or a whole node. Having that uneven vote one either one of the sides will result in a situation where one would need to interact manually when one of the sites go down. More about this can be read here: http://technet.microsoft.com/en-us/library/dd197575(WS.10).aspx


To move to such a configuration like shown above and have the ability to work out of both sites simultaneously, the distance between the sites is important. The SAP Netweaver Architecture is what we would call a chatty application from a DBMS point of view. Means there are no procedures executed in DBMS, but all logic runs in the SAP Netweaver application tier. In order to get the data into that layer, very often thousands of SQL Statements are getting issued against the DBMS layer per second. These days we are measuring the latency per statement execution in low single digit millisecond ranges. And we rely on getting such small response times in order to fulfill the SLAs towards the user community. Hence any millisecond latency added due to geographical distance between application tier and DBMS, has impact on the user experience. Therefore the distance should ideally be small or restricted to a few miles. Out of exercises we did with different customers, one for sure can tell that a distance of 20 miles does add measurable latency to any single query compared to application servers which are hosted in the same datacenter with the active DBMS server. Hence most customers using these kinds of configurations have the two sites in closer distance, either within the same campus or within the same city/town perimeter. Under such conditions, it is a given that for non-shared storage HA configurations we only will consider synchronous Availability Mode.


As in our first reference architecture, we would use the existing Windows Cluster configuration which we still need for the SAP side as Cluster to build our AlwaysOn configuration on. For geographically dispersed or multi-site clusters we usually recommend the following WSFC configurations:

In the first configuration shown in this article, the ideal scenario got accomplished with a Node majority cluster where the File Share Witness is located in a third location. In this case one site can vanish w/o any impact on the availability of the cluster configuration.


All in all we look at 4 different possibilities:

All in all we can end with these types of configurations: 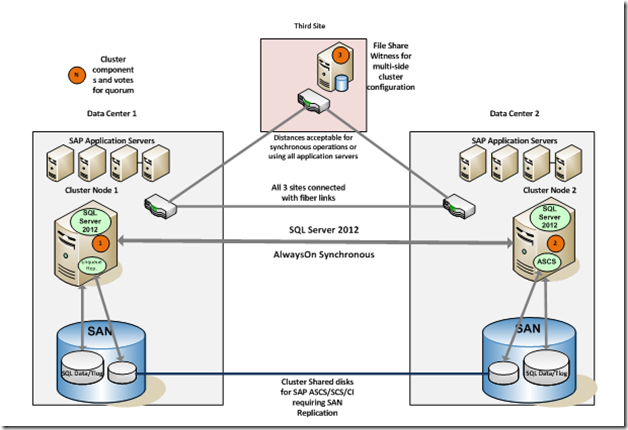 In this case we got 2 cluster nodes which run SAP and SQL server components. As before we a can failover crosswise and run SAP and SQL Server on the very same node. The File Share Witness is located in the third site. Storage replication is only used the shared disk of the SAP components. Changes to the SAP databases are replicated with AlwaysOn.


In order to have an asymmetric cluster working on Windows Server 2008 apply the latest Service Pack and the QFE described in the following KBA on all nodes of the cluster: http://support.microsoft.com/default.aspx?scid=kb;en-US;976097


For Windows Server 2008 R2, please install SP1 only. This Service Pack will include the necessary logic for asymmetric cluster configurations.


This QFE will allow cluster disk resources which can be connected from at least 2 nodes only. Means adding a 3 rd or 4 th node to the cluster which can’t access the shared disk(s) leveraged by existing two nodes. Or one could add storage to a cluster configuration of 3 or more nodes where the disk resources can’t be accessed or seen by some of the nodes as long as two of the nodes do see the storage.


NOTE: If you are running the Cluster Validation Report on such an asymmetric storage configuration, there will be a warning telling that the particular disk does not have all cluster nodes listed as possible owners. Another warning will be shown under ‘List Potential Cluster Disks’ where one will find a message that there is a disk which is not cluster-able by all cluster nodes. Again something which is normal in this case. 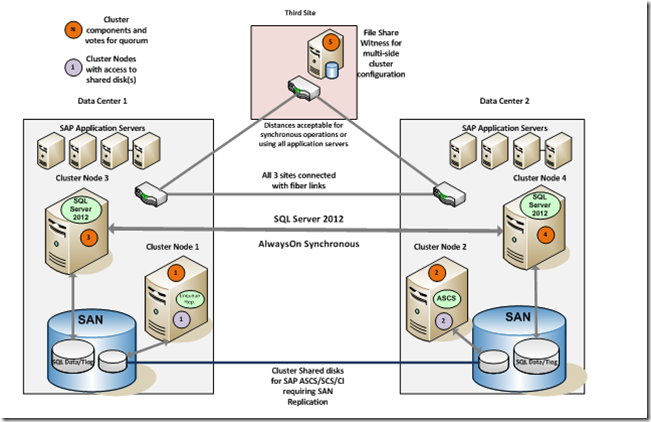 Above you see a WSFC configuration out of 4 nodes plus the File Share Witness as quorum. As displayed only two of the nodes do have access to the shared disks for the SAP ASCS/SCS/CI. Whereas the two nodes running the SQL Server 2012 AlwaysOn configuration doesn't have any access to those disks and do not need to have access. The advantage of this configuration is that one can sustain two quorum votes disappearing. E.g. If one of the servers is down for maintenance and another goes down unexpectedly, the configuration still would work, assuming that it is not both database nodes or both SAP nodes being down at the same time. 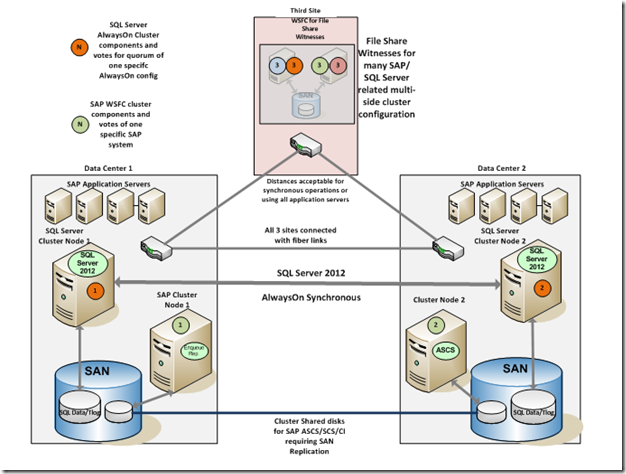 Radically different is the way on how we deal with the File Share Witnesses in this case. Assuming that this is not the only productive SAP system we want to run between two datacenters. Also assuming that we separate out the WSFC configuration for the SAP Single Point of Failures and AlwaysOn, we need a larger number of File Share Witnesses on one side and also need deal with the fact that each of the cluster does have 3 quorum votes only. Hence we only can sustain one missing quorum component and still be fine. Due to the concentration of that many quorum votes of independent WSFC configuration in the third datacenter, just using one server there to keep all the shares is too risky. Therefore we establish a WSFC configuration with node and disk majority quorum to keep this larger number of File Share Witnesses.


That was it in regards to the configurations for now. In the next part we go into building our first Availability Group for a SAP ERP database.