Turn on suggestions
Auto-suggest helps you quickly narrow down your search results by suggesting possible matches as you type.
Showing results for
Show  only  | Search instead for
Did you mean:
SAP Rolling Kernel Switch (RKS) on Azure
By

I was preparing a proposal for a customer recently and one of the pain points with their current SAP infrastructure architecture was that they were unable to patch their SAP environment without impacting their business with planned downtime.

Given the business criticality of SAP to this customer, minimizing planned downtime during patching was a key requirement and something that had to be addressed in our SAP on Azure proposal.

An SAP (on Azure) environment is made up of multiple software components that may need to be patched during the lifecycle of the system:

In this blog post I’d like to demonstrate how an SAP on Azure infrastructure deployed following Microsoft’s reference architecture for SAP S/4HANA for Linux VMs on Azure in combination with an SAP native capability called Rolling Kernel Switch (RKS) can enable the SAP Kernel to be patched with minimized business downtime.

It’s important to note that while the detailed steps outlined in this blog post are for Linux, the Rolling Kernel Switch (RKS) will work equally as well in Windows environments on Azure that follow the Microsoft reference architecture for SAP NetWeaver (Windows) for AnyDB on Azure.

It is mandatory to read and understand the standard SAP documentation and notes before implementing RKS in your own environment.

For the purposes of this blog/demo I’ve built an S/4HANA 1809 on Azure environment that follows the reference architecture with the following exceptions:

The SAP components of the reference architecture for SAP S/4HANA for Linux VMs on Azure that we will be patching without system downtime are outlined in green in the schematic below: 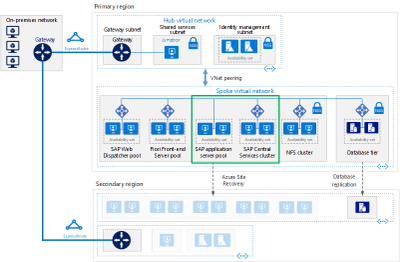 The current kernel patch level is 773 patch 101 and this will be patched to level 201 using RKS.

It is important to note that while the detailed steps in this blog are specific to SUSE SLES, the Rolling Kernel Switch (RKS) can be implemented in a similar fashion for SAP NetWeaver on RHEL HA environments on Azure.

In addition, SAP note 953653 - Rolling Kernel Switch contains important pre-requisites and restrictions. In particular, it should be noted that there is a manual RKS procedure for 7.2x kernel releases. As of 7.4x an automatic RKS procedure is provided by SAP.

It is mandatory to read and understand the standard SAP documentation and notes before implementing RKS in your own environment.

In summary, the rolling kernel switch (RKS) is an automated procedure that enables the SAP kernel in an SAP ABAP system to be exchanged without system downtime (for dual-stack and AS Java scenario limitations please refer to SAP note 953653).

RKS can also be used to make parameter changes while the system is running. Usually, RKS only causes minimal restrictions for users of the system.

In the SAP NetWeaver 7.5 Admin Guide, SAP states that the advantages of the rolling kernel switch are:

The intent of this blog is not to repeat the SAP documentation, rather, the key steps in the RKS process are outlined, in particular any steps that are relevant to the Microsoft reference architecture for SAP S/4HANA for Linux VMs on Azure are called out.

SAP lists the manual checks and preparations as follows:

Source: RKS - Manual and Automatic Checks of the System Configuration in the SAP NetWeaver 7.5 Admin Guide

Let’s consider each of these manual checks in turn:

The expected workload on my SAP on Azure demo environment is minimal, however, in a real Production environment this is a key consideration and is why SAP recommends performing RKS activities during periods of low business activity if possible.

One of the additional benefits of RKS is that it can be used to implement SAP profile parameter changes without planned business downtime.

We definitely want to import a new kernel patch so let’s quickly confirm the location of DIR_CT_RUN. I checked using transaction AL11:

Create a backup of DIR_CT_RUN is also easy. For the purposes of this demo I’ve simply created a copy using the o/s command cp as follows:

In my case the latest patch level for the complete 773 kernel is 201. Remember to download the DATABASE INDEPENDENT archive AND the DATABASE SPECIFIC archive. In my case SAP HANA. 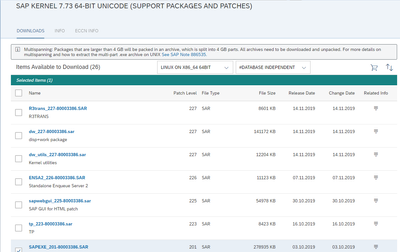 Most SAP Production environments will be using SAP Logon Groups already but if not it’s always a good practice to do so and they can be configured via transaction SMLG. In my demo case I have two SAP application severs configured in a single Logon Group:

In my demo environment this isn’t an issue, however, it very likely will be in real Production system. This is also why SAP recommends performing RKS activities at periods of lower system activity. Each SAP application server will be stopped in turn and if there are still long running batch jobs running on the application server these will be terminated.

The list of RKS automatic checks is extensive and available here

As well as being executed prior to the RKS process itself an Administrator can also execute the automated pre-checks in advance.

To do this, in SAP MMC choose Check Prerequisites from the context menu (right-click) of System Update. 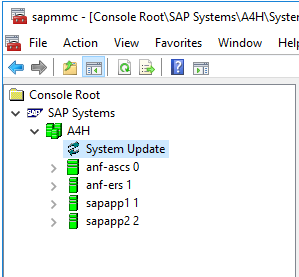 The first time I executed the pre-requisite checks in my SAP on Azure demo environment I experienced the following error:

To resolve I uncommented the localhost entry in the hosts file on the VM running the SAM MMC:

# localhost name resolution is handled within DNS itself.

Once the localhosts issue was resolved the next message received was an RKS Warning. RKS had detected - correctly – that my setup was HA using SUSE SLES for SAP Applications 12 SP4.

The SAP note in the message and one other referenced within it were relevant to my setup:

As my HA clusters are based on SLES 12 SP4 I put the ASCS cluster into maintenance mode: 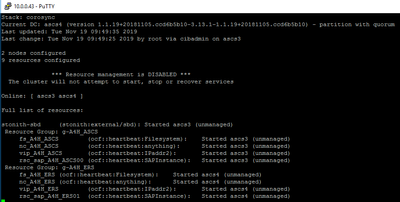 But noted that for Pacemaker clusters running on SUSE Linux Enterprise Server for SAP Applications (SLES for SAP) 15 you should follow the following procedure:

Now that we’ve completed the pre-checks, we’re just about ready to execute the RKS process itself.

SAP provides a detailed description of the RKS Process in the SAP NetWeaver 7.5 Admin Guide

Each component of the SAP system will be stopped in turn: 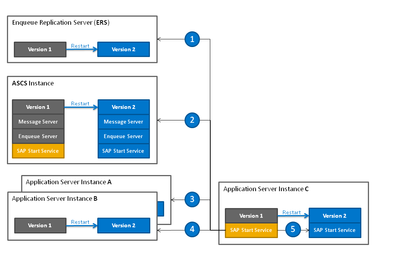 Kernel Patch levels prior to starting the RKS 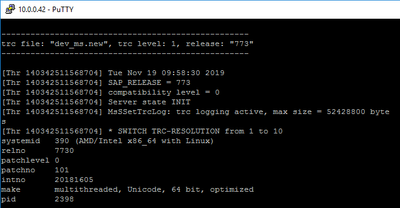 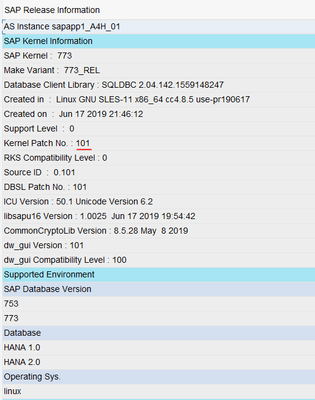 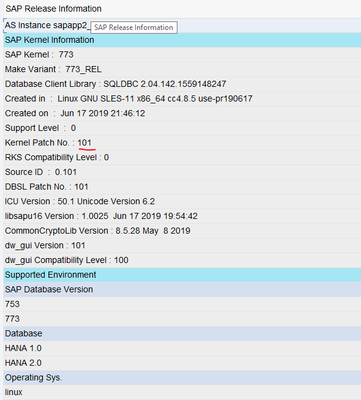 To start the RKS Process again I right click on System Update and select Update System from the Context Menu.

Note: You can also start RKS from the command line

In my demo case I reduced the soft shutdown timeout and start wait timeout to lower values than the defaults shown here. In Production environments this should be carefully considered following SAP’s guidance on RKS timeouts. 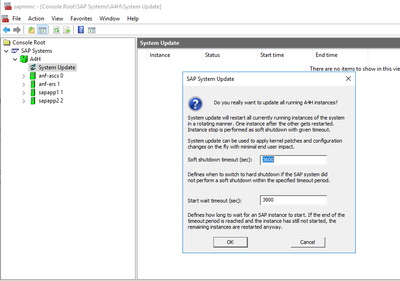 The RKS process re-runs the automated pre-requisite checks we did earlier. As we’ve seen this warning already and read and understood the SAP note 2077934 we can simply click OK. 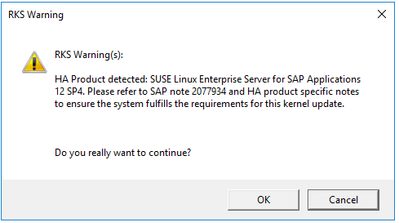 The restart of the ERS and ASCS is very quick (see the RKS log below for detailed timings). Within a few seconds the first SAP application server is shutdown: 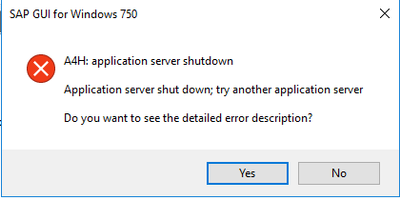 I’m still logged on via the second application server and can see that Kernel update is active in transaction SM51: 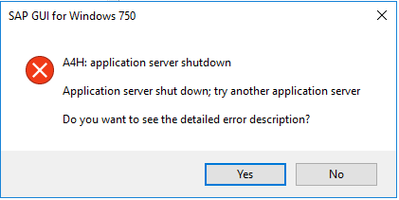 After a few more minutes the process completes successfully.

We can view the complete RKS log via the SAP MMC or directly at the operating system level. 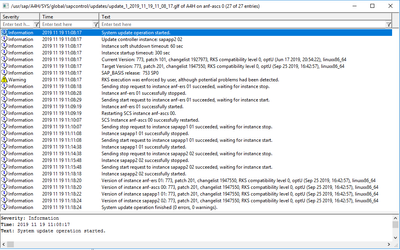 Now that the RKS process has completed we’ll quickly double-check that all the required components have been patched correctly: 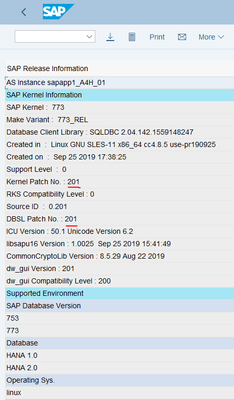 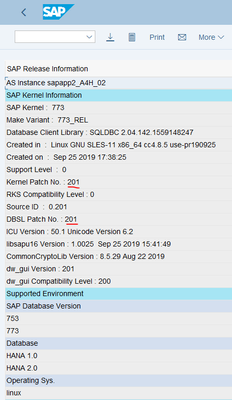 We can now take the ASCS Cluster out of maintenance mode:

Remembering that per SAP note 2254173 with SLES15 and the sap-suse-cluster-connector version 3.1.0 it will not be necessary to take the cluster in and out of maintenance mode before executing RKS.

Future blog posts will look at downtime minimized patching approaches to other software components of an SAP on Azure environment.