Turn on suggestions
Auto-suggest helps you quickly narrow down your search results by suggesting possible matches as you type.
Showing results for
Show  only  | Search instead for
Did you mean:
SAP on SQL Installation on Mount Points
By

Customers installing SAP systems onto servers with Windows Mount Points will frequently receive an error such as the one depicted below: 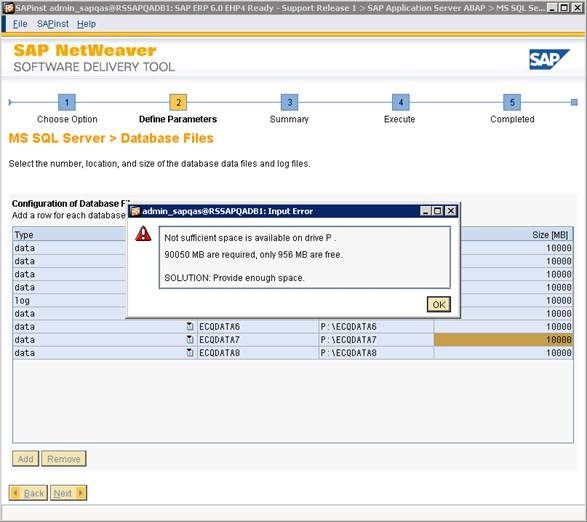 Before discussing the resolution to this problem it is best to explain the reason why customers should try to use Mount Points on modern powerful Intel & AMD servers .

Reviewing these benchmarks most customers observe that modern hardware far exceeds the performance requirements for each single SAP system.

For example a small SAP ECC 6.0 customer might require 30,000 SAPS.  Experience has shown that on almost all OLTP customer systems, even those with heavy customer ABAP programs the workload distribution is approximately 30% for Database and 70% for Application server .  Even SAP BW when correctly configured should be ~30/70

A majority of SAP customers run at least some of their Windows SAP systems on Windows Cluster configurations.

So in this scenario a customer might need to buy 4 x 2 processor commodity servers to run one small 30,000 SAPS ECC 6.0 system.  2 servers would be needed to cluster the Database and 2 application servers.  The total SAPS of the hardware is over 100,000 SAPS and yet the requirement for the Database is only 10,000 SAPS.  Often the Database cluster is Active/Passive - clearly a very poor solution as the capacity is much greater than 100,000 SAPS yet the actual requirement is only 30,000 SAPS

Many customers questions are faced with the following situation:

1.     Intel/AMD hardware is far more powerful than the SAPS requirement for a single system such as ECC, BW or CRM

2.     High Availability (MSCS) and 3 Tier architectures mean that the number of servers and SAPS values are far higher than needed as each system (ECC, BW, CRM) requires its own dedicated hardware, own two node cluster and own application servers

3.     The average utilization on each server is very low

SAP & Microsoft have supported a solution to this problem for many years.   SAP fully support Multi-SID clustering.  In the Asia Pacific region at least > 85% of all new SAP installations are Multi-SID and this has become the default deployment model for most customers and partners.

Benefits: It is Recommended to Evaluate Multi-SID Clusters

Multi-SID clustering allows customers to create a 2 – 16 node MSCS cluster (2-5 nodes is common) and consolidate all SQL Databases and SAP Single Point of Failure (typically 2-6 is common) to a single cluster.

The benefit of Multi-SID clustering is

1.     Reduction in the total number of servers required (particularly reducing the number of the relatively more expensive scale up 4 processor / 8 processor DB servers)

2.     Increase the average utilization on each server

4.     Allow a customer to consolidate a large SAP landscape onto one manageable infrastructure.  Example: ECC 6.0, BW, CRM, PI, EP, SCM, Solution Manager and Business Objects can (and there are numerous successfully customers running without incident) to a single 3-4 node SQL cluster

5.     SAP systems that are busier than others can be isolated to run on a dedicated cluster node

6.     SAP systems that are not busy (such as Solution Manager, PI, EP, SRM) can be consolidated and their SQL Server databases moved via Cluster Administrator onto a single cluster node

Another benefit of Multi-SID clusters is that they * DO NOT * link, aggregate or combine SAP or SQL in terms of version management or operations.  Each SQL Server on a Multi-SID cluster is a Named Instance

Each SQL Server Named Instance has its own completely independent :

In summary each SQL Server cluster is completely isolated from each other.  It is technically possible to run SQL 2005, SQL 2008, SQL 2008 R2 and SQL 11 on the same cluster.  Similarly it would be possible to run 10 named instances of SQL Server on a “n” node cluster each with a different SQL Service Pack or CU. Each SQL Server can be started, stopped, reconfigured, upgraded* or even uninstalled independently without interrupting the other SQL Servers on the same cluster or same node.

Multi-SID clustering will be the topic of another blog about server consolidation.  In addition Multi-SID application servers will be discussed.

1.     In order to deliver adequate IO performance in all cases (regardless of SAN vendor) multiple LUNs are required for each Database

2.     Multi-SID clusters run out of drive letters unless mount points are used

In order to Parallelize IO it is strictly mandatory in all cases, regardless of SAN vendor to create multiple LUNs for SQL Server Databases .  It is completely incorrect and wrong to assume that because the IO is being distributed onto a single large array of disks on the SAN that a single large LUN/disk will deliver the same performance. If you SAN vendor or H/W partner is recommending a single large LUN for storing SQL Data Files for a SAP system please post a comment in this blog.

A single large LUN leads to severe IO queuing inside the Windows OS before the IO ever leaves the HBA card in the server. SQL Server executes many asynchronous IO requests and benefits from parallel IO paths.  A single LUN creates a “one lane highway” between server and SAN. 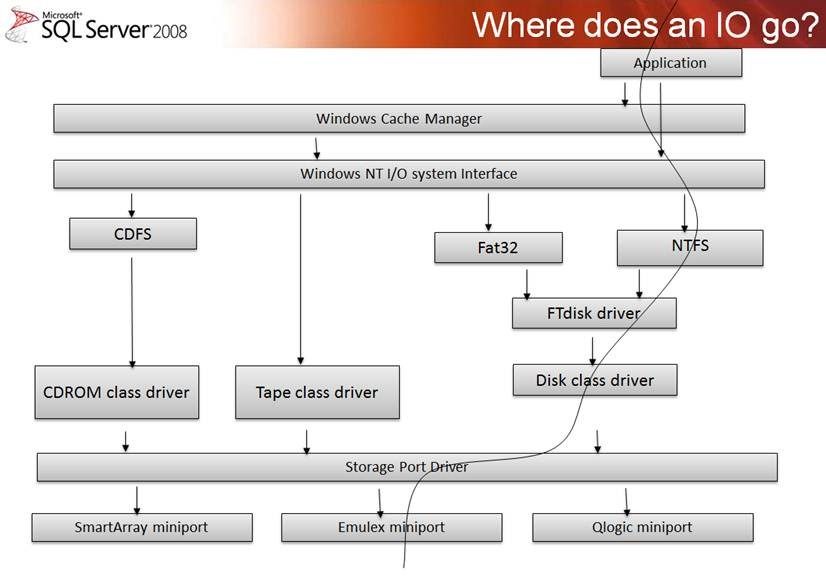 How Many Windows Mount Points Do I Need?

Previously some Microsoft documentation recommended a 1:1 ratio between CPU cores and datafiles.  This recommendation is now obsolete due to the fact modern CPU such as the AMD Magny cours has 12 cores.  This would lead to far too many Data Files. The chances of GAM page contention and other issues related to too few datafiles becomes very unlikely after about 16 datafiles.

Systems usually run on dedicated database servers which have between 4 and
8 CPU cores.

Systems usually run on dedicated database servers which have between 8 and
16 CPU cores.

Large sized systems:  A minimum of 16 data files and maximum of 32.

Systems which today run on hardware between 16 and 32 CPU cores or up to
64 threads.

In all cases only one Transaction Log file is needed.  This should be sized at least 50GB for a medium sized system.  Do not configure more than 32 datafiles for SAP systems. 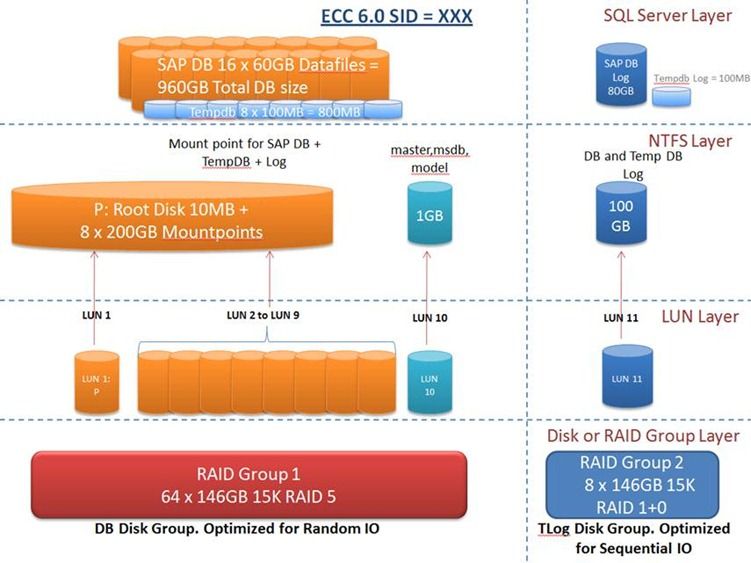 How to Configure Mount Points & How to Resolve the Error in SAPInst?

Care must be taken when configuring Mount Points, specifically the dependencies must be verified.

After installing SQL Server in a cluster make sure to run the Dependency Viewer.  The Dependencies should look like this (click on this picture for higher resolution copy. 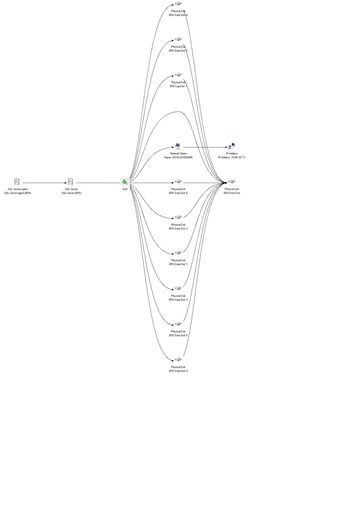 How to resolve the error in SAPInst?

The error in SAPInst is cause by the SAP Installer checking the freespace on the Mount Point Root Disk and not on the individual Mounted Disks.

There are two easy solutions to this problem:

1.     Create the Database manually before starting SAPInst using the script below – SAPInst will bypass this screen and install

2.     Set the size of the Database to something very small (such as 1GB) and the installer will continue.  SQL Server Data Files will grow automatically during the installation or you can manually increase them (ensure Note 1238993 is implemented).

-- Most Medium Size SAP systems need 8 or 16 datafiles, 16 is generally quite common

-- Note: only 2 datafiles per LUN/disk and separate disk for Transaction Log

Conclusion on Mount Points – Use them

Mount Points are a prerequisite for beginning the necessary journey towards a consolidated landscape.

It is highly recommended to start making a strategy for consolidating SAP on SQL systems.

It is highly recommended that customers terminate the old “Active/Passive 2 node cluster for each and every SAP component” as soon as possible.  This approach is out-dated, underperforming, expensive and leads to server sprawl.

* There is one rare circumstance where a Service Pack upgrade may require a restart, but this is easily avoided with rolling upgrades.