Turn on suggestions
Auto-suggest helps you quickly narrow down your search results by suggesting possible matches as you type.
Showing results for
Show  only  | Search instead for
Did you mean:
Optimizing BW Query Performance
By

First of all you have to make sure that there is no bottleneck in the most important system resources: CPU, memory and I/O. You can configure the maximum number of CPU threads, which are used for a single database query (see below). However, SQL Server may reduce the actual number of used threads, if there are not enough free worker threads. Therefore the runtime of the same query can vary greatly, dependent on the current system load. A memory bottleneck on SQL Server may result in additional I/O. When there are sufficient CPU and memory resources, then repeatedly running queries are fully cached. In this case the performance of the I/O system is not crucial.

A huge part of the overall runtime of a BW query can be consumed on the SAP application server, not on the database server. Therefore the system resources on the application server are important, too. A simple BW query typically consists of 3 parts:

In SAP BW data is typically loaded into cubes using BW process chains. These chains contain steps for dropping/re-creating indexes and updating the database statistics (for small dimension tables). If one of these steps fails, then you may clearly see a BW query performance issue.

1. Number of requests in f-fact table

The f-fact table of a cube is optimized for data load (DTP: Data Transfer Process), request deletion and BW cube compression. On SQL Server, the f-fact table is partitioned by the data load request ID (as it is the case for most other database systems supported by SAP BW). Having a separate partition per request ID, the request deletion is very fast and does not consume considerable transaction log space. The BW cube compression also benefits from this, because part of the BW cube compression is the deletion of the compressed requests. However, BW query performance does not benefit from this kind of partitioning. Quite the contrary, having more than a few hundred partitions results in a decreased BW query performance. We ran a suite of queries, running against f-fact tables with the same data but different number of partitions:

Since the partitions are created and dropped automatically on the f-fact table, a BW administrator has no direct influence on the number of partitions. However, there are two ways to reduce the number of partitions. First of all, you should keep the number of data loads (DTPs) into a cube as low as possible by avoiding small request. You can combine many small requests to a single, large one by loading the requests first into a Data Store Object (DSO). The following DTP from the DSO to the cube creates then fewer but larger requests in the cube.

Secondly, you can perform BW cube compression, which reduces the number of partitions again. For best query performance you should compress all requests anyway (which deletes all rows in the f-fact table). BW query performance is still good, if just most of the requests are compressed. Some customers keep new requests for at least one week uncompressed in the f-fact table. Thereby they can easily delete faulty requests, which were loaded into the cube by mistake.

For Microsoft SQL Server, we did not always benefit from BW cube compression in the past. Reason was the index layout using a heap for the e-fact table when having conventional b-tree indexes. 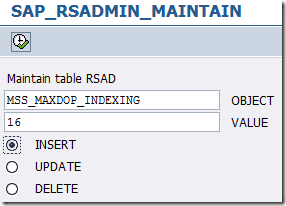 In our suite of test queries we have clearly seen this expected behavior of PAGE compression. When the table already was in the SQL Server data cache, then the increased CPU usage resulted in slightly slower BW queries. On the other hand, the query performance was better, if the data head to be read from disk first.

We measured the performance when running BW queries on BW compressed cubes with column-store index, dependent on the used degree of parallelism. Two suites of queries were running against two different cubes. The biggest improvement was seen when moving from 1 CPU thread to 2 threads (This is typically only the case for column-store indexes, not for conventional b-tree indexes). Increasing to 4 threads improved performance noticeably. A further increase to 8 threads did not have any impact in many cases:

The impact of MaxDop depends on many factors like cube design, query design, actual data and used hardware. However, in all cases we have cleary seen the negative impact when using only a single CPU thread per query. That is why you should never set MSS_MAXDOP_QUERY to 1.

When there is a (temporary) CPU bottleneck, SQL Server can reduce the actual number of used threads for a query. In extreme cases, this could end up in one thread, even when MSS_MAXDOP_QUERY is set to 4 or higher. In particular when running BW queries against multi-providers you can run into this issue. A BW multi-provider is a logical cube, which retrieves the data from multiple basis cubes at the same point in time. This results in many simultaneously running SQL queries: 2 SQL queries (one on the f-fact table and one on the e-fact table) per basis cube. When using MaxDop 4 for a multi-provider consisting of 4 basis cubes, SQL Server may need up to 32 threads (2 tables * 4 cubes * MaxDop 4 = 32 threads). On a database server with less than 32 CPU threads this can result in actually using MaxDop 1 for at least one SQL query. Keep in mind, that the response time of a BW query is determined by the slowest participating SQL query.

That is why the default value of MSS_MAXDOP_QUERY (=2) was chosen relatively low. On a database server with more than 64 CPU threads, you may increase MSS_MAXDOP_QUERY to 3 or 4 (dependent on your workload while BW queries are running).

For best BW query performance, one should avoid running BW queries during high workload. For example, BW cube compression can be very CPU intensive, since it includes the re-creation of the column-store index using 8 CPU threads by default.

A column-store index is optimized for large tables having some million rows. It is described in detail in a white paper ( http://scn.sap.com/docs/DOC-33129 ) and in SAP note 1771177 . Cubes with small fact tables, having only a few thousand rows, do hardly benefit from the column-store. However, the query performance of such small cubes is typically not an issue. Therefore we recommend using the column-store for all of your BW cubes, independent of their (current) size. Keep in mind that BW cubes are typically growing by and by.

To fully benefit from the performance improvements of the partitioned column-store, you have to apply the latest version of SAP note 1771177 first (which will be released in April 2013). Then you should re-create the indexes of existing, partitioned cubes. The new code improvements optimize column-store segment elimination, in addition to having partitions. Therefore, you have a performance benefit on BW cubes (containing a filter on a time characteristics), even when creating only a single partition.

A BW aggregate is neither a configuration option nor is it SQL Server specific. However, we want to discuss aggregates here, since they were the preferred means to increase BW query performance in the past. A BW aggregate is a copy of an existing BW basis cube with a restricted number of characteristics and/or applied filters. BW aggregates are optimized for one or a few BW queries. Therefore you typically have to create many aggregates in order to support all BW queries running against a single basis cube. Technically, a BW aggregate looks like a conventional cube. It has two fact tables, each of them having its own database indexes. Since BW aggregates are logical copies of the cube, they have to be manually loaded and compressed each time data is loaded into the basis cube.

When comparing BW query runtime between different systems or different configurations you have to ensure, that you measure under the same conditions. For example, when running a SQL query (as part of a BW query), SQL Server may or may not perform physical I/O. By repeating the same BW query you can ensure that all data is already in the SQL Server buffer cache. Alternatively you could run the SQL command DBCC DROPCLEANBUFFERS to ensure that no data is in the buffer cache.

Alternatively you can turn off the OLAP cache on BW query level using SAP transaction RSRT. However, in productive customer systems the OLAP cache is typically turned on. So why should you turn it off for performance tests? There are two reasons for this: Firstly, the likelihood of a fully filled OLAP cache is in a test environment much higher than in a productive system. Therefore you would benefit much more from the OLAP cache in a test system, which results in unrealistic measurements. Secondly, you typically want to tune the slowest BW queries running under the worst conditions (when the OLAP cache does not contain fitting entries by chance).