Turn on suggestions
Auto-suggest helps you quickly narrow down your search results by suggesting possible matches as you type.
Showing results for
Show  only  | Search instead for
Did you mean:
Message misaligned log IOs which required falling back to synchronous IO in SQL Server Error Log
By

Disk Manufacturers introduced a new specification for disk storage formats in 2011.  The new specification increases the size of the disk sectors.  Some flash based devices like Fusion-io and new large capacity disks such as 4TB SATA disks are commonly using Native 4K format.  The new disk format can lead to warnings in the SQL Server errorlog when log records are written in 512 or 512E format and restored on 4k Native format.

4k Native format can offer performance and reliability advantages in some circumstances.  In most cases this error message is not serious, however the concepts and causes of this error should be understood.

First we need to understand some terminology

SQL Server is typically performing “Asynchronous IO” meaning IO operations are passing disk commands to the disk subsystem and then continuing to process other tasks.  During a SORT operation SQL Server read ahead logic can read pages from the user database and then immediately start processing after the first page has been returned.   This allows SQL Server to use the CPU resources to sort the rows on the page while the I/O subsystem is fetching (reading) additional pages.  This increases the utilization of I/O bandwidth and other resources such as CPU.

SQL Server exposes the pending asynchronous I/O requests in the sys.dm_io_pending_io_requests DMV.  The column io_pending_ms_ticks indicates how long the I/O has been pending.    If the column reports FALSE for io_pending it indicates that the I/O has completed at the operating system level.

Asynchronous IO avoids “holding” a SQL Server worker thread in kernel mode and allows it to do other user mode processing.

Synchronous IO in comparison is calls to the API such as WriteFile that will not return control to the calling code until the operation is completed.

The first step is to run the following command on all the disks where SQL Server datafiles, tempdb files or log files are stored.  This should be run on all nodes in an AlwaysOn cluster, Log Shipping or SQL Mirror deployment.

If this command is run on 4K Native disk the following output is seen.  The Bytes per Sector = 4096

If this command is run on most conventional SAN disks the output below can seen.  The Bytes per Sector = 512

512E Advanced Format looks like this - the Bytes per Physical Sector = 4096.  This format is a 4096 physical sector size but a 512 logical sector size.  This configuration is default on Hyper-V 3.0 VHDX disks.

If there are different disk sector formats in use there is a possibility that error 9012: There have been xxxx misaligned log IOs which required falling back to synchronous IO can occur

SQL Server storage engine logic detects the disk Sector Size and will align the Transaction Log Files metadata and internal boundaries to match the Sector Size (either 512 or 4096 bytes).  The error message 9012 is generated when SQL Server has detected that Log Entries have been written assuming a Sector Size different to the Sector Size found on the current SQL Server instance.  This can happen in scenarios such as the below:

To ensure consistency SQL Server may switch from performing asynchronous IO to synchronous IO.  This can have an adverse performance impact if technologies like synchronous AlwaysOn or Mirroring are used.

In this scenario it is possible that log writes on an AlwaysOn replica or DBM secondary are switched to Synchronous IO.  This could lead to higher than expected replication delays between the Primary and Replica(s)/Secondary

FusionIO and other SSD vendors may provide utilities that allow configuration of Physical Sector Size.  The screenshot below shows the FusionIO tool with a 4K Native format 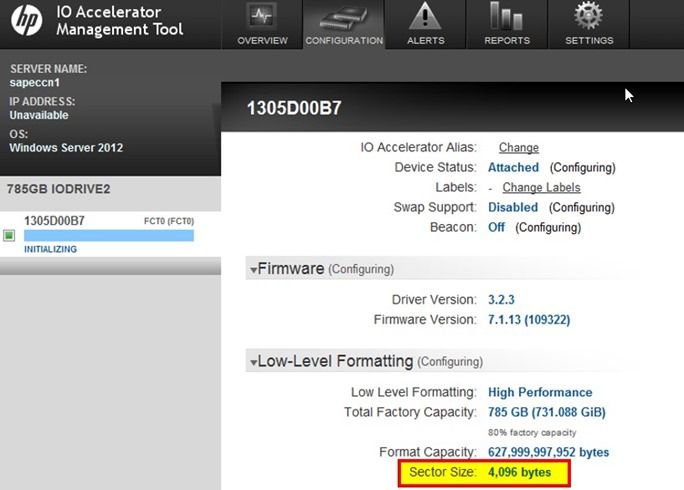 The screenshot below shows a 512 Byte Physical Sector Size. 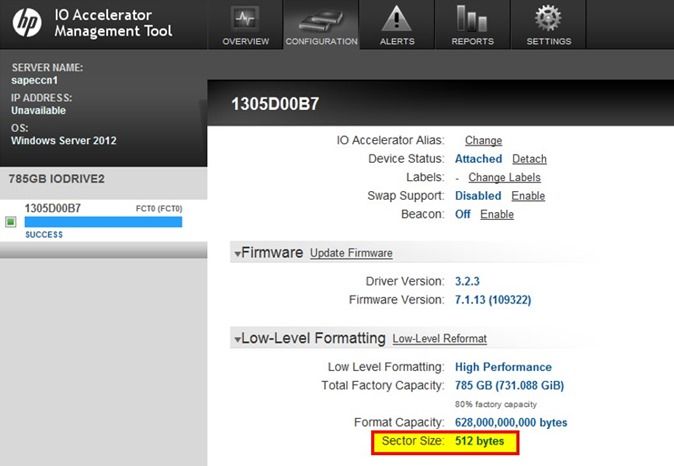 The diagram below shows the two key advantages of 4K Native Disks. 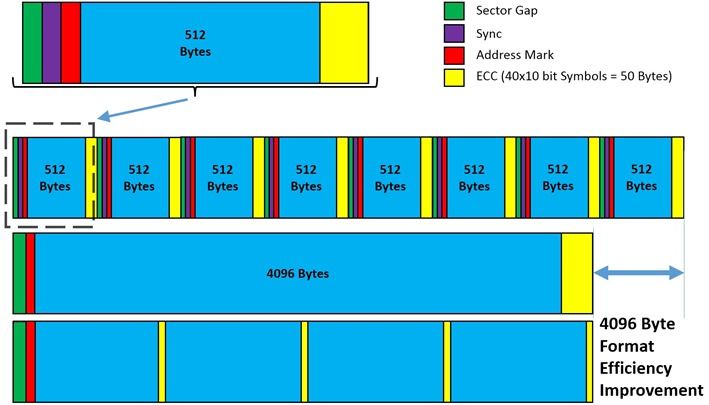 Each customer configuration can be different and there are a large number of possible deployment patterns.  It is therefore difficult to give generic advice.  4K Native disks do offer advantages.

1. It is generally recommended to have AlwaysOn or Database Mirroring configurations on hardware that is somewhat similar.  The requirement is much less strict than SQL Server clustering.  Similar hardware configurations between AlwaysOn nodes reduces the possibility of issues such as those discussed in this blog and also makes performance more predictable and easier to troubleshoot

3. Log Shipping or Asynchronous AlwaysOn or Mirroring  scenarios would typically not be adversely impacted by this warning message.  It is possible that the restore of log records is somewhat slower at very high transaction volumes

Any disk containing SQL Server datafiles, log files or tempdb files should always be formatted 64K at the Windows NTFS layer regardless of the underlying sector size.

To check this run command:

The “Bytes per cluster” should be 65536.  If this is not the case it is recommended to reformat the disk in Disk Management as per the screenshot below. 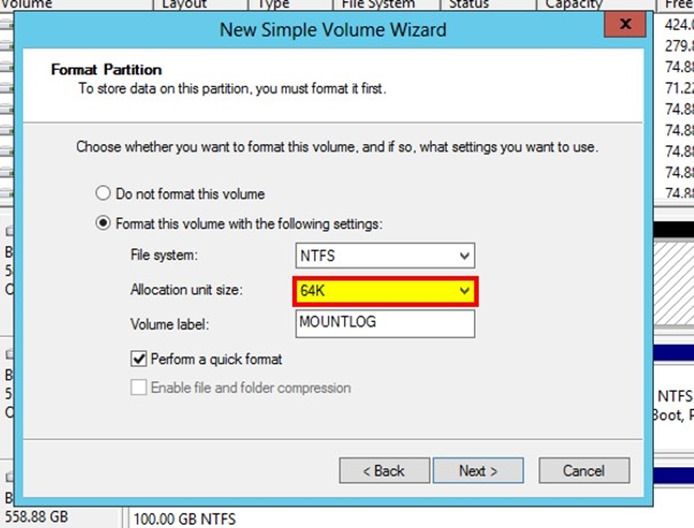