Installation & Configuration of Windows NFS Client to enable UNIX to Windows to Mount a U...


When migrating a SAP system from UNIX/Oracle or UNIX/DB2 to Windows/SQL it is sometimes useful to be able to mount a UNIX file system on a Windows server.  The Network File System protocol (NFS) is used by most UNIX and Linux operating systems such as Solaris, HPUX, AIX etc.  The Windows equivalent of NFS is Server Message Block known as SMB or CIFS

How to Setup Windows to UNIX File System Interoperability

There are several technologies to enable connectivity between Windows servers and UNIX operating systems:


To install Services for NFS components


4.     Select the File Services check box to install this role on the server, and then click Next .


5.     Select the Services for Network File System check box, and then click Next . 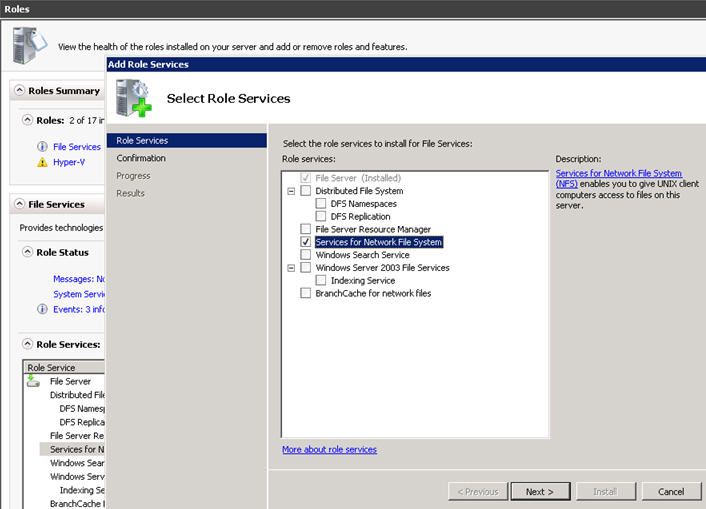 3.      The next step involves “mapping” the Windows user id to the UID and GID of the <sid>adm account on the UNIX server


There are three ways of doing this, however in most cases we recommend option #1


5.      Ensure NFS configuration (/etc/dfs/dfstab or similar) on the UNIX server is correct – the Windows hostname must be allowed to mount the file system usually


6. Mount the SAP profile directory using Windows Explorer or command line with the syntax unixserver:/export (recommended) or use the traditional Windows \\servername\share

Note: SAP requires that the NFS connection has a drive letter.  It is therefore always necessary to logon the Windows host and ensure the NFS drives are connected prior to starting the SAP application server.  NFS is not a particularly robust protocol therefore it is not to be used as a Export or Import location.  It is not permitted to export an SAP system to dump files on an NFS source.  In addition it is not recommended to store dump files on a NFS source and import on a Windows server.  Always read/write to dump files on a local disk

During OS/DB Migrations from proprietary UNIX systems to Intel/AMD commodity solutions the R3LOAD export/dump files need to be transferred to Windows.


SAP Migration Monitor supports FTP to transfer dump files to a Windows environment.  However this requires the installation of FTP on the Windows server.

There are three good reasons for establishing Windows to UNIX interoperability:


1.      The ability to use powerful Intel/AMD servers for the Migration.  This will greatly speed up the export/import process

2.      The ability to use SAPInst GUI to complete the full OS/DB Migration process without the need to use command line tools. A full manual procedure for exporting and importing a SAP system has been documented in this blog, however the latest versions of SAPInst for SAP Kernel 7.0 systems and higher can be exported/imported provided that the UNIX file system containing the SAP profiles is exposed.  SAPInst will check the profile directory before starting the export.  Provided a Wintel server can access the profile directory, SAPInst will allow a GUI based export of a UNIX system.

3.      Increasing numbers of customers are using modern Intel and AMD servers as SAP application servers connecting to UNIX database servers.   Modern Intel and AMD based servers are vastly cheaper than proprietary UNIX servers and deliver comparable or better performance.  SAP OLTP type applications such as ECC 6.0 usually require 60% to 80% of the system CPU resources on the Application Tier with the remainder on the Database Tier.  Therefore 60% to 80% of the SAPS (Unit of SAP workload sizing) can run on low cost Intel or AMD commodity servers.

As of February 2010 a typical fully configured SAP application server deployed in our customer base costs less than $15,000 inclusive of 96-128GB RAM service & support.

A typical medium size SAP system may have about 100,000 SAPS in total with 30,000 SAPS for Database Layer and about 70,000 SAPS for the SAP Application Layer (a typical 30% Database / 70% Application Tier split).  In this hypothetical case where the application workload requirement is equal to 70,000 SAPS, this requirement can be met with only 3 Intel or AMD servers at a cost of approximately $45,000 in total.  The energy consumption is much lower than UNIX systems and the rack space required is only 2U each or less if blades are used.

Many customers compare the workload capabilities of modern Intel and AMD based servers and the total all up cost including Operating System License, Energy/Aircon/rackspace, 3 year maintenance and administration + OS patching costs (practically zero for a Windows 2008 R2 server with Internet Explorer removed and all other Windows features secured/disabled ) find that Intel/AMD based systems cost is 1/8 th to 1/10 th that of proprietary UNIX platforms.

4.  Windows NFS Services also allows a customer to preserve a single SAP Transport directory and domain during a migration from UNIX/Oracle to Win/SQL.  During a period of 2-6 weeks the Dev and QAS systems are running on Win/SQL and the Production system is running on UNIX/Oracle.  It is still supported to transport configuration settings, SAP Security and ABAP programs from a Win/SQL Development system to a Production system running on UNIX/Oracle (because SAP is largely OS/DB independent).


Below are some useful links.  If you have any questions feel free to post them in this blog.

http://brneurosci.org/linuxsetup108.html - a very good overview of setup and configuration process for Win2003

http://www.softpanorama.org/Net/Application_layer/nfs.shtml - a generic overview of UNIX side configuration

More information on SAP Benchmarks can be found on the official SAP Benchmark website .  The above statements about SAPS as unit of SAP sizing and cost of various hardware platforms are derived out from real SAP customer deployment or migration.  The term “SAPS” is used as a measure of equivalent workload.