Turn on suggestions
Auto-suggest helps you quickly narrow down your search results by suggesting possible matches as you type.
Showing results for
Show  only  | Search instead for
Did you mean:
Global Advisory Firm Improves SAP BW Performance and Lowers Costs by Moving SAP Landscape to Windows & SQL Server on Azure and Hyper-V
By


The Australian subsidiary of a Global Advisory and Accounting Practice has migrated their SAP landscape from HPUX/Oracle running on Superdome UNIX servers to Windows and SQL Server running on Azure and Hyper-V.


Non-production SAP systems have been moved onto the Microsoft Azure cloud platform while production runs in a hosted data centre on Hyper-V.  Azure Site Recovery based on Hyper-V replica is used to synchronize the SAP landscape to Azure to provide Disaster Recovery services in a world class data centre at a reasonable cost.


The customer required a flexible and cost effective solution to replace their existing UNIX/Oracle landscape that was end of life.  Rather than simply moving the existing SAP landscape from HPUX/Oracle to Windows and SQL Server, the customer wanted to lower TCO, improve performance and leverage new technologies.


BNW Consulting is a SAP cloud and migration partner based in Melbourne, Australia that has done some of the first SAP on Azure deployments.  The partner briefed the customer on several new technologies and how that could allow the customer to lower TCO and add value to the organization:

1. Move non-production SAP systems from on-premises to Azure.  This eliminates the need to buy servers and storage as well as the benefits of instant and elastic provisioning


3. Convert SAP BW cubes from Btree tables and indexes to SQL Server 2014 Column Store.  The performance gains and storage efficiency allowed the customer to terminate the use of SAP Business Warehouse Accelerator, a product that was found to be by the customer expensive and difficult to manage in cloud and hosted data centers


4. Run SAP on high performance low cost 2 socket Intel commodity servers and virtualize both the database servers and application servers with Windows 2012 R2 Hyper-V.  SAP on SQL Server is certified and supported by numerous different hardware vendors, on multiple hyper-visors and on at least two public cloud platforms.  SAP on SQL Server does not require any specialized appliances.


Entire Production landscape was migrated in one weekend including end user validation and verification and handover to business by 3PM on the Sunday of the migration.


Warwick Chai the Director of BNW said “Using the latest OS/DB Migration tools from SAP in combination with very powerful high performance Intel servers BNW is able to migrate any customer of virtually any size in a weekend.  We have done this for customers with database sizes more than 10TB and achieve a throughput of around 2TB per hour”.


SQL Server 2014 extended the capabilities of the Column Store to include writable scenarios including:

The performance gains for a sample of BW reports ranged from 1% - 90% faster with BWA decommissioned and no longer in use.  BW Admin activities such as loading also speed up. 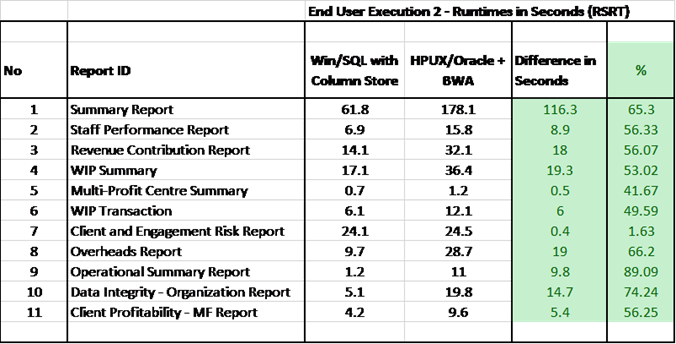 
The customer was able to migrate their entire landscape in 4 months and with minimal to no disruption to their business operations.

Unlike moving BW Systems to HANA, SQL Server Column Store technologies are available on all releases of SAP BW starting from BW 7.0 up to BW 7.4.

Warwick Chai said “BNW wanted to deliver a modern and flexible platform for the customer, leveraging the best of new technologies rather than just doing a like-for-like swap from UNIX/Oracle to Windows and SQL Server. This provides them with a platform for the future, utilizing the latest Microsoft technologies and allows them to take advantage of the features and functionality the products provide”.

In order to support SQL Server 2014 and enable the Column Store features for BW some SAP support packages were applied.  Some minor BW Administration settings had to be changed to decommission and remove SAP Business Warehouse Accelerator from the landscape.


Azure Site-2-Site VPN has been used to seamlessly link the Azure VNET to the customer network.

The databases are backed up using the SQL Server 2014 Backup to URL feature. SQL Server Transparent Data Encryption has been used to protect at rest data and backups.   There has been a considerable reduction in the amount of storage and the cost of storage as Azure storage is very reasonably priced.


1969259 - LCM CLI Master Note - How to promote thousands of objects across BI4 environments?