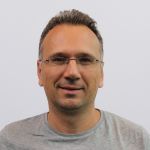 File Server with SOFS and S2D as an Alternative to Cluster Shared Disk for Clustering of an SAP (A)SCS Instance in ...

First published on MSDN on Nov 14, 2017
We are excited to announce general availability of clustering of an SAP (A)SCS instance on Windows Server Failover Cluster ( WSFC ) with file server , e.g. Scale Out File Server (SOFS) and Storage Spaces Direct (S2D) in Azure cloud. This is an alternative option for clustering of an SAP (A)SCS instance, to the existing option with cluster shared disks .

When you cluster an SAP (A)SCS instance, a typical setting is to use cluster share disks .

One of the top request from SAP customers running their SAP HA systems in Azure was an alternative Microsoft solution for clustered shared disks.

Clustering of an SAP (A)SCS instances with file share is supported for SAP NetWeaver 7.40 (and higher) products, with SAP Kernel 7.49 (and higher) . 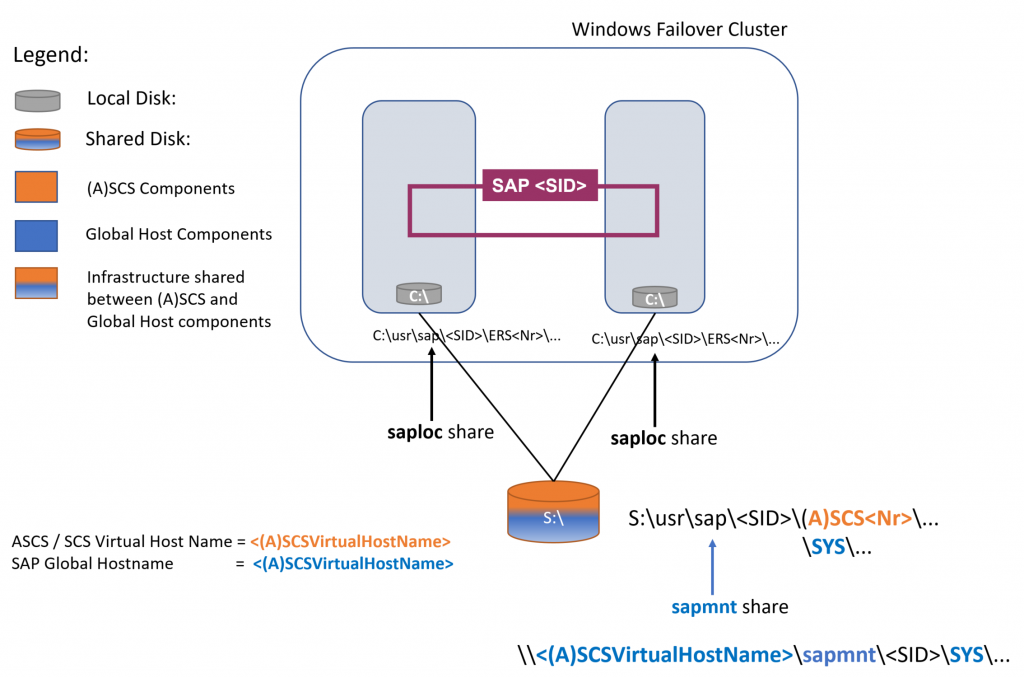 
With the new SAP (A)SCS HA architecture , the most important changes are the following: 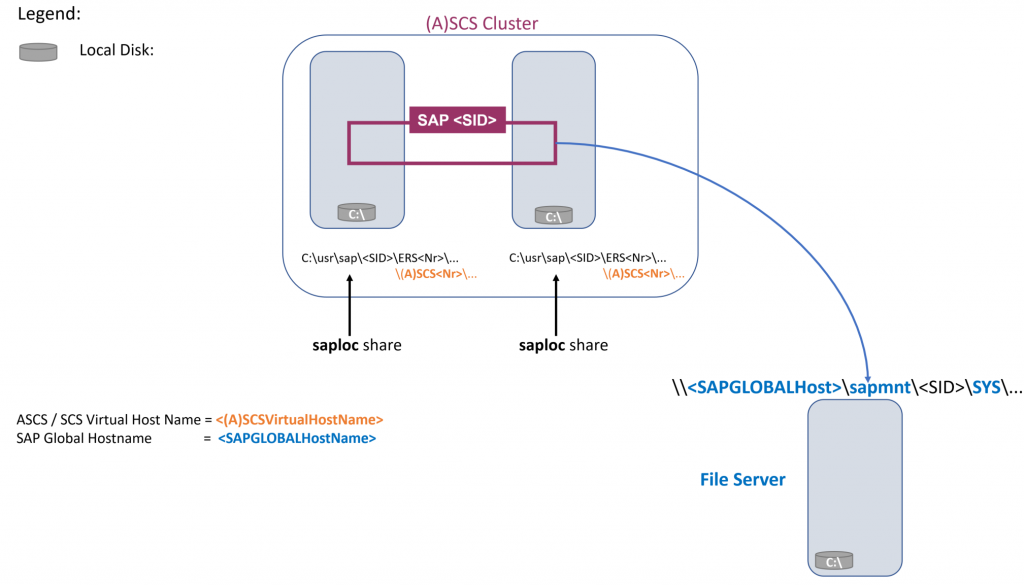 If we would install file server on standalone Windows machine, we would create a single point of failure. Therefore, high availability of a file share server is also an important part of the overall SAP system HA story. 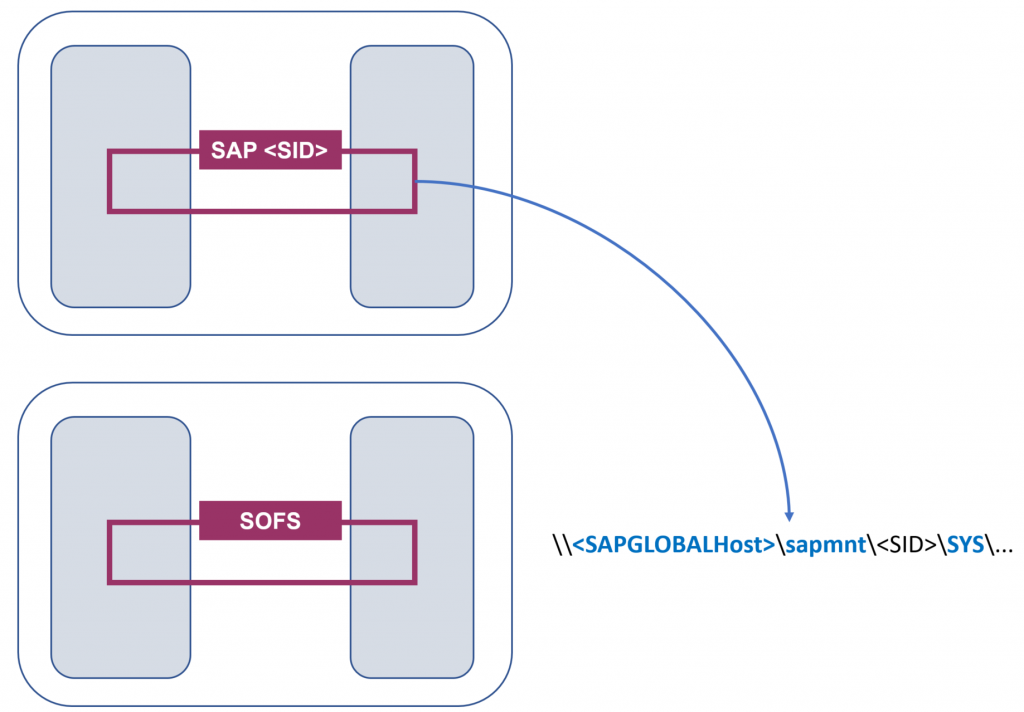 For running SOFS on Azure, two criteria are important for cluster shared disks:


Storage spaces direct ( S2D ) feature that comes with Windows Server 2016 fulfills both of these criteria.

S2D enables us to stripe local disks and create storage pool across different cluster nodes . Inside of those pools, we can create volumes which are presented to a cluster as shared storage e.g. as cluster shared volumes.

S2D is synchronously replicating disk content and offering different resilience, so loosing of some disks will NOT bring the whole shared storage down. 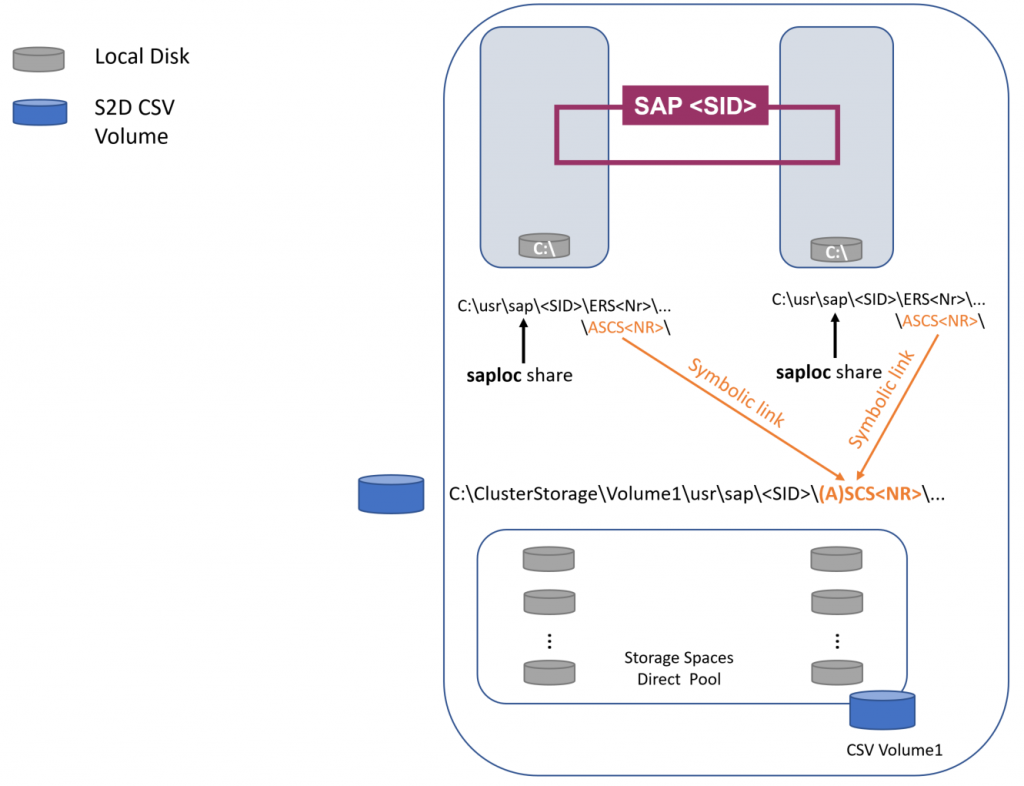 The nice thing about S2D is that it is a software-based shared storage solution that works transparently in Azure cloud, as well as in on-premises physical or virtual environments. 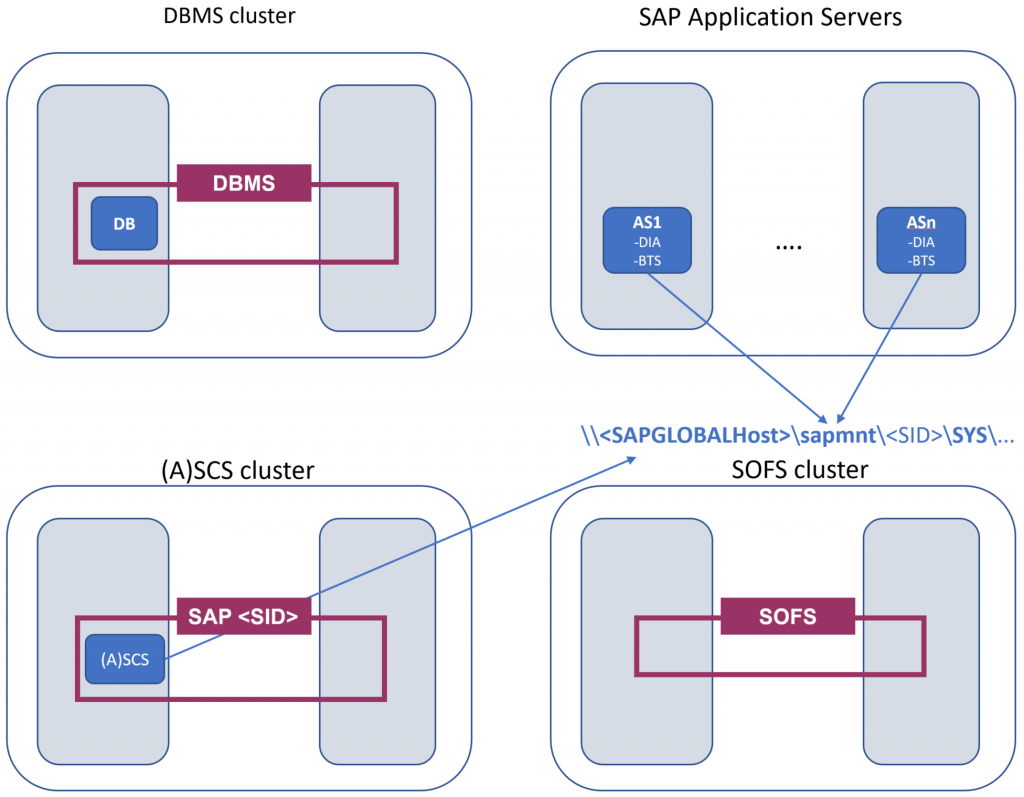 
SAP (A)SCS Multi-SID enables us to install and consolidate multiple SAP (A)SCS instances in one cluster. Through consolidation, your overall Azure infrastructure costs will be reduced.

To enable a file share for the second the SAP <SID2> GLOBAHOST on the SAME SOFS cluster, you can use the same existing SAP <SID1> <SAPGLOBAlHOST> network name and same Volume1 . 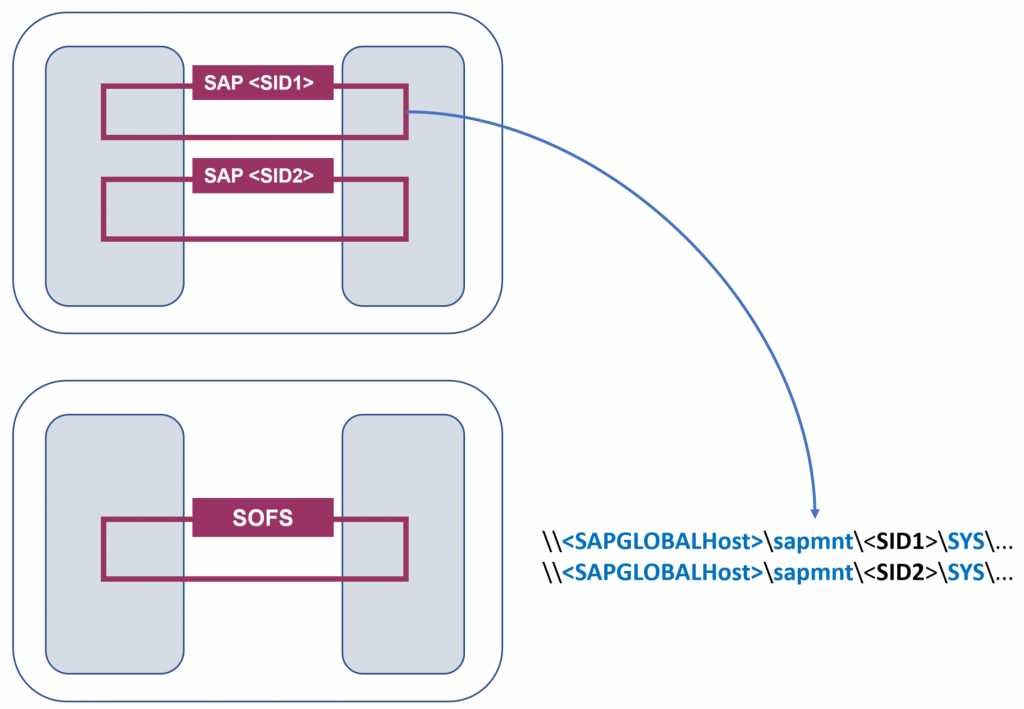 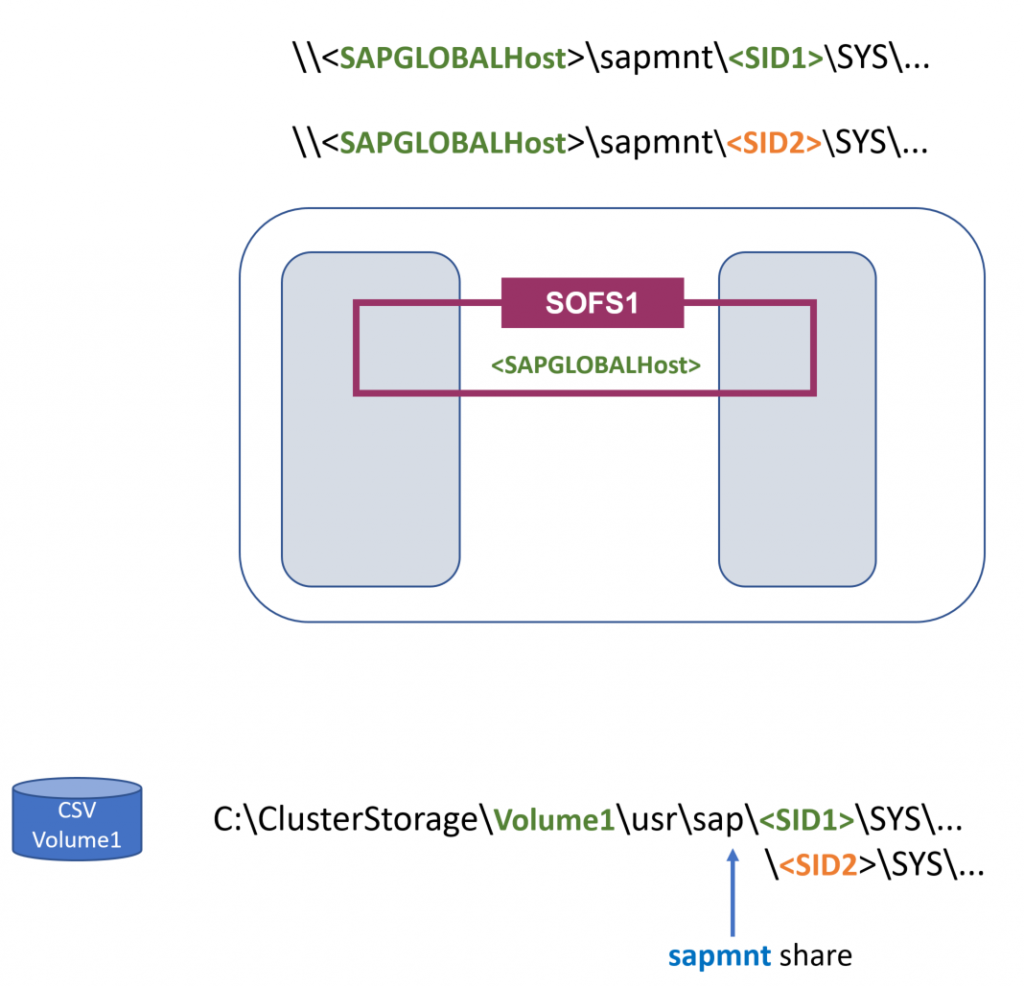 Another option, is to use new <SAPGLOBAlHOST2> network name and new Volume2 for the second <SID2> file share. 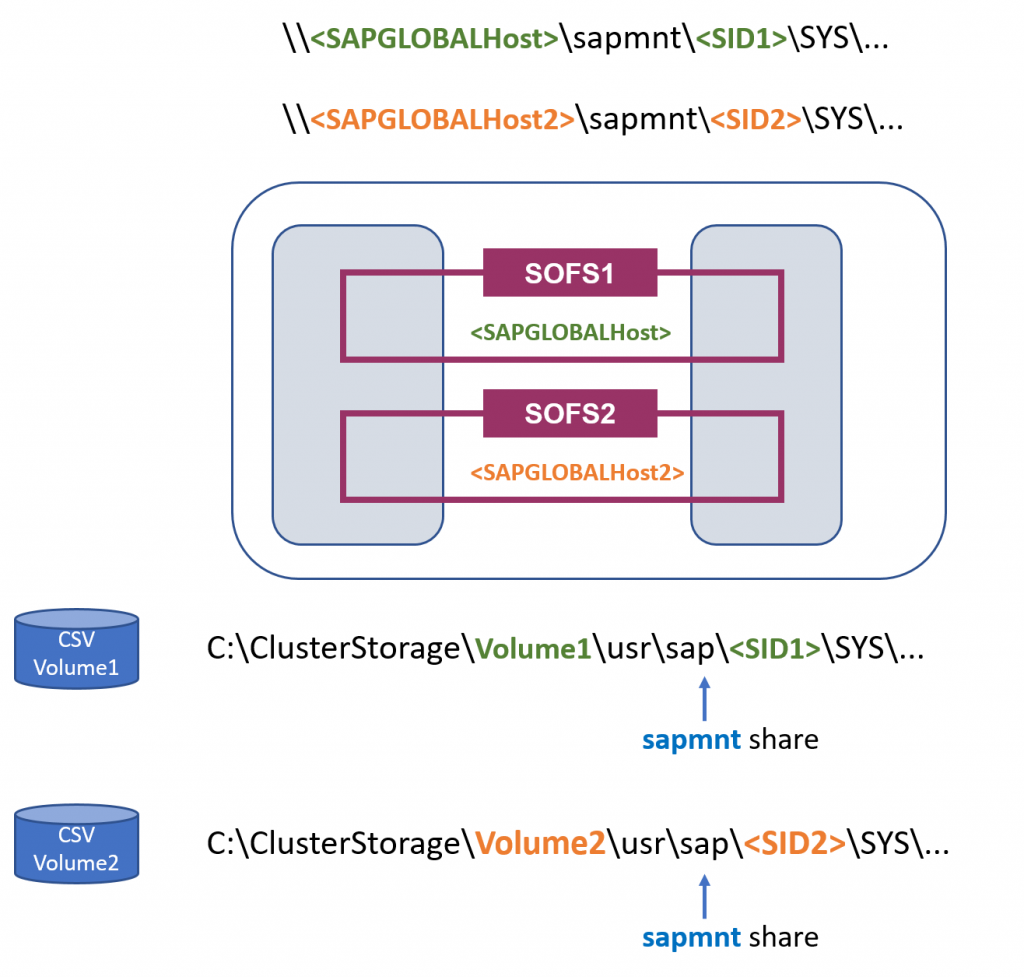 
For more information, have a look at the new documentation and white papers on Microsoft SAP on Azure site:


From SAP side, you can check this new white paper: Installation of an (A)SCS Instance on a Failover Cluster with no Shared Disks .

You can find more information on SOFS and S2D here: