Turn on suggestions
Auto-suggest helps you quickly narrow down your search results by suggesting possible matches as you type.
Showing results for
Show  only  | Search instead for
Did you mean:
CLP Optimize Storage, Improve Performance & Streamline DBA Tasks with SQL 2008 R2 + PAGE Compression
By

During the Christmas 2010 holidays, the CLP internal SAP Basis team successfully completed an upgrade of their SAP ECC 6.0 IS-Utilities customer care and billing instance to SQL 2008 R2 and PAGE compressed the database.


The compression project was completed fully online with no interruption of service to end users and the utility’s 2.4M customers in a little over just 3 days and without the help of any outside consultants.  SQL Server 2008 R2 PAGE compression improved overall system performance and there was no significant increase in CPU consumption on the Database server.


Microsoft and SAP fully supported compression technologies for SAP systems for some time.   More recently SAP have provided customers with a simple to use intuitive SAP GUI based tool for compressing SAP systems called MSSCOMPRESS.


1.      Implement required OSS Notes in non-Productive systems (can be done even prior to upgrading to SQL 2008 R2)


8.      Identify a usage period such as a weekend and start compression process in online mode


9.   Monitor transaction and IO performance during and after compression

Previous blogs discuss the prerequisites and requirements to implement the SAP GUI tool MSSCOMPRESS and the OSS Note 1459005 for Secondary Index Compression support.


SQL Server 2008 and above allows customers with MS Cluster to perform rolling upgrades thereby reducing the downtime of an upgrade.


During the compression process the CLP Basis team made the following configuration changes:


2.      Suspended any DBA type tasks such as index rebuilds and statistics updates that were scheduled to run after periodic Archiving jobs


4.      Set the TEMPDB size to 5GB and closely monitored the TEMPDB consumption


5.      Excluded SAP Cluster Tables and tables with BLOB data such as RFBLG, CDCLS and BALDAT – these tables do not greatly benefit from compression as they are compressed already by the SAP application layer.

During a fully ONLINE compression procedure the TEMPDB is used to preserve read and write access to a table as it is being compressed.


The exact amount of TEMPDB usage is dependent on how much user initiated write activity occurs during the compression process and the amount of transaction log space is determined by the size of a table and the logging mode.  More information is available in this whitepaper about SQL 2008 Compression . 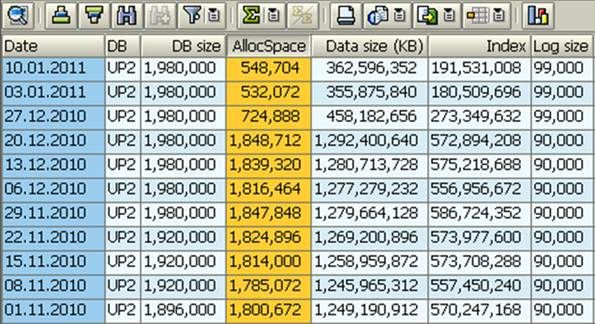 The SAP IS-UTILITIES table DFKKOP was originally 266GB in size comprised of 131GB of table data and 135GB in secondary indexes .


After compression this had reduced to 50GB with 21GB of table data and 28GB in secondary indexes – a compression ratio of 81%.

The increase in size over the last few weeks shows the impact of regular archiving jobs on this table. 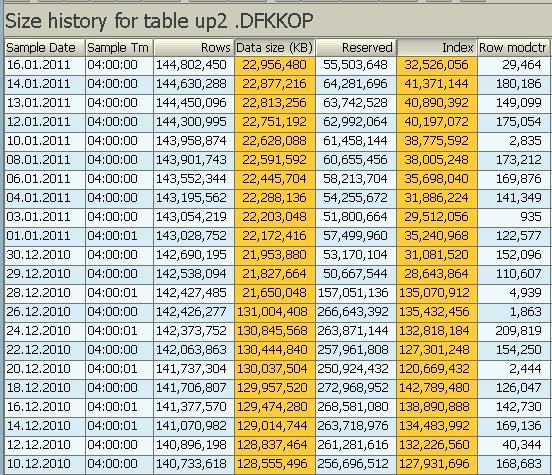 The runtime of CLP SAP IS-U CCS batch window has decreased from over 3 hours to about 2 hours.  Dialog and Batch performance decreased significantly for all IS-U and back office transactions universally, but SAP IS-U performance has improved particularly significantly due to the strong improvement in data cache hit ratio.  On a typical nightly batch run approximately 70,000 invoice documents are generated.


SQL Server 2008 R2 table and index compression dramatically lowers storage requirements and improves performance.  SQL Server automatically releases unused data pages (referred to as “blocks” in Oracle) to the database.  SQL Server does not automatically reduce the size of the data files at the operating system level.  It is optional to do this step and many customers allow the database to grow and use the free space in the DB.


There are two ways to physically release the space after compressing an SAP system:


1.      Use R3LOAD to export / import the database – usually this is not recommended


2.      Use SQL Server SHRINKFILE command to shrink each SQL datafile – this is an Online operation (no downtime needed)

Note: SHRINKFILE can have serious performance consequences.  These are explained in Section 2 of this blog .  Always rebuild the table data with MSSCOMPRESS after shrinking a database.


CLP’s IT solution is built on standard 2 processor and 4 processor commodity AMD and Intel based servers with a significantly lower price than proprietary UNIX or mainframe systems.  The entire CLP IT infrastructure runs on Windows and commodity platforms and CLP has lowered infrastructure costs and improved integration by standardizing on Windows for the entire business ever since migrating off IBM Mainframes.

CLP state that their success in managing a 2.4 million customer SAP IS-U CCS solution is due to the following factors:


1.      Archiving strategy – Due to the massive amount of new data being generated every day, large-scale billing systems must have a data management and archiving solution to preserve performance.  CLP uses Open Text IXOS and archive meter reading, consumption and billing data after it has reached an online retention period of 14 months.


2.      Keeping up with the latest SAP, SQL Server and Windows releases to benefit from new technology and features.  CLP used to invest in 3 rd party backup compression software, but this capability has become standard in new releases of SQL Server reduce cost, complexity and support requirements.


3.      Utilize commodity servers and solutions, not only are they cheaper than UNIX/Oracle solutions but the performance on Intel/AMD platforms is as good or better than UNIX platforms.  Intel Servers, Windows OS and SQL DB have matched expensive proprietary solutions in terms of features and performance. The benefit of a Microsoft platform is a broad choice of possible hardware platform providers and technical skills are more commonly available in the market.


4.      Secure Windows servers using Windows Active Directory Polices and remove Internet Explorer to avoid the need to apply Windows Security patches that apply to or depend on Internet Explorer


5.      Consolidate on leading vendors to improve product integration and simpler support.  CLP standardize on HP commodity servers, software from SAP or Microsoft and certified 3 rd party solutions only as and when required

CLP Power will refresh the SAP IS-U/CCS hardware platform in early 2012 and anticipates purchasing affordable commodity servers with 1TB RAM or more for the database cluster nodes.  The entire customer care and billing database serving 2.4M customers will effectively run “in memory” as the database size and SQL Server data cache will be approximately the same size.  This is expected to lead to a very significant further reduction in batch processing times and improvement in online performance. Furthermore CLP will adopt Solid State Disk technology to dramatically improve any remaining I/O to the disk subsystem. Leverage of SSD as default storage medium becomes feasible and cost effective due to the significant database compression ratios enabled by SQL Server 2008 R2, including highly effective compression of SAP Unicode data.