In l2bridge, all container frames will have the same MAC address as the host due to Layer-2 address translation (MAC re-write) operation on ingress and egress. For larger, cross-host container deployments, this helps reduce the stress on switches having to learn MAC addresses of sometimes short-lived containers. Whenever container hosts are virtualized, this comes with the additional advantage that we do not need to enable MAC address spoofing on the VM NICs of the container hosts for container traffic to reach destinations outside of their host. 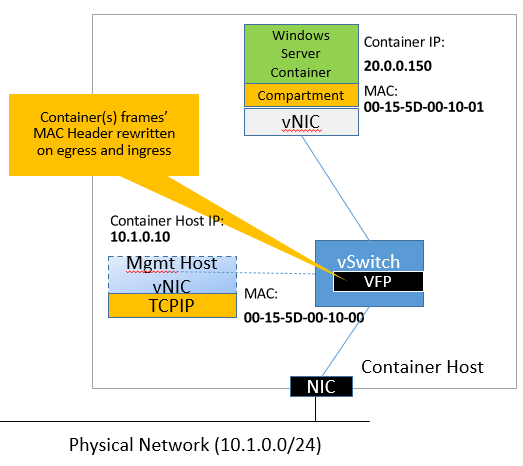 There are several networking scenarios that are essential to successfully containerize and connect a distributed set of services, such as:

We will be showing all the above on l2bridge and briefly touch on some more advanced use-cases:

In order to follow along, 2x Windows Server machines (Windows Server, version 1809 or above) are required with:

To achieve this, run the following commands on the machines:

Many of the needed policies to setup l2bridge are conveniently exposed through Docker’s libnetwork driver on Windows.

The available options for network creation are documented in 2 locations (see #1 here and #2 here) but here is a table breaking down all the arguments used:

IMPORTANT: Usually, l2bridge requires that the specified gateway (“10.244.3.1”) exists somewhere in the network infrastructure and that the gateway provides proper routing for our designated prefix. We will be showing an alternative approach where we will create an HNS endpoint on the host from scratch and configure it so that it acts as a gateway.

NOTE: You may see a network blip for a few seconds while the vSwitch is being created for the first l2bridge network.

TIP: You can create multiple l2bridge networks on top of a single vSwitch, “consuming” only one NIC. It is even possible to isolate the networks by VLAN using -o com.docker.network.windowsshim.vlanid flag.

Next, we will enable forwarding on the host vNIC and setup a host endpoint as a quasi gateway for the containers to use.

NOTE: The last netsh command above would not be needed if we supplied a proper gateway that exists in the network infrastructure at network creation. Since we created a host endpoint to use in place of a gateway, we need to add a static ARP entry with a dummy MAC so that traffic is able to leave our host without being stuck waiting for an ARP probe to resolve this gateway IP.

One of the most compelling reasons for using l2bridge is the ability to connect containers not only on the local machine, but also with remote machines to form a network. For communication across container hosts, one needs to plumb static routes so that each host knows where a given container lives.

To realize connecting containers across the 2 hosts, the following commands would need to be executed on host A:

Similarly, on host B the following also needs to be executed:

Now l2bridge containers running both locally and on remote hosts can communicate with each other.

TIP: On public cloud platforms, one also needs to add these routes to the default system’s route table, so the underlying host cloud network knows how to forward packets with container IPs to the correct destination. For instance on Azure, user-defined routes of type “virtual appliance” would need to be added to the Azure virtual network. If host A and host B were VMs provisioned in an Azure resource group “$Rg”, this could be done by issuing the following az commands:

NOTE: The last netsh command above would not be needed if we supplied a proper gateway that exists in the network infrastructure at network creation. Since we created a host endpoint to use in place of a gateway, we need to add a static ARP entry with a dummy MAC so that traffic is able to leave our host without being stuck waiting for an ARP probe to resolve this gateway IP.

Here is a video demonstrating all the connectivity paths available after launching the containers:

One feature to expose containerized applications and make them more available is to map container ports to an external port on the host.

Here is a video demonstrating how to apply the policy to bind a TCP container port to a host port and access it:

The ability to distribute traffic across multiple containerized backends using a load balancer leads to higher scalability and reliability of applications.

Here is a video showing how to create the load balancer and access it using its frontend VIP "10.10.0.10" from host and container:

What if instead of making applications more available, one needs to restrict traffic between containers? l2bridge networks are ideally suited for network access control lists (ACLs) that define policies which limit network access to only those workloads that are explicitly permitted.

Here is a video showing the ACL policy in action and how to apply it:

Access control lists and Windows fire-walling is a very deep and complex topic. HNS supports more granular capabilities to implement network micro-segmentation and govern traffic flows than shown above. Most of these enhancements are available via Tigera’s Calico for Windows product and will be incrementally documented here and here.

Attaching a container to both networks can be done as follows:

To add more vNICs, we can create HNS endpoints under a given network and attach them to the container’s network compartment. For example, to add another NIC in network “winl2bridge_4096”:

By executing all the above, a single container has three vNICs ready to use now (two in “winl2bridge_4096”, one from “winl2bridge_4097”). Every endpoint may have different policies and configurations specifically tailored to meet the needs of the application and business. 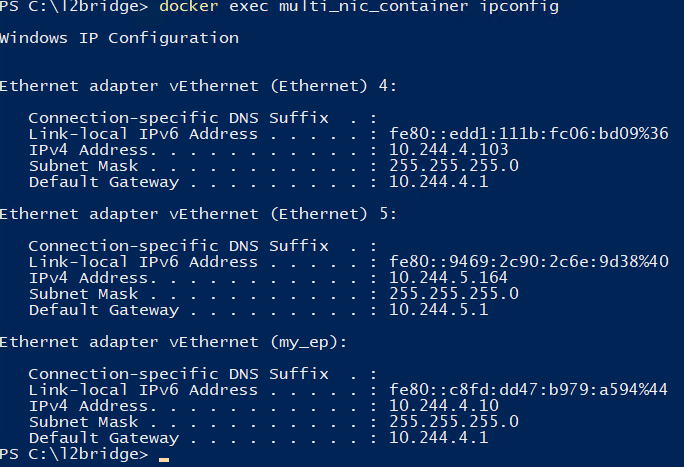 We have covered several supported capabilities of l2bridge container networking, including:

L2bridge networks require upfront configuration to install correctly but offers many useful features as well as enhanced performance and control of the container network. It is always recommended to leverage orchestrators such as Kubernetes which utilize CNI plugins to streamline and automate many of these configuration tasks, while still rewarding advanced users with a similar level of configurability. All of the HNS APIs used above and much more are also open-source in a Golang shim (see hcsshim).

As always, thanks for reading and please let us know about your scenarios or questions in the comments section below!