Turn on suggestions
Auto-suggest helps you quickly narrow down your search results by suggesting possible matches as you type.
Showing results for
Show  only  | Search instead for
Did you mean:
Introducing Packet Monitor
By

Network connectivity issues are often hard to diagnose. There are multiple machines involved in a single data transfer; at least two endpoints and a complex network infrastructure in the middle. Lately, with the introduction of network virtualization, more of the infrastructure capabilities like routing and switching are being integrated into the endpoints. The additional complexity in the endpoints often leads to connectivity issues that are hard to diagnose. This new infrastructure requires a more comprehensive network diagnostics approach.

Packet Monitor (PacketMon) is an in-box cross-component network diagnostics tool for Windows. It can be used for packet capture, packet drop detection, packet filtering and counting. The tool is especially helpful in virtualization scenarios like container networking, SDN, etc. It is available in-box via pktmon.exe command, and via Windows Admin Center extensions. 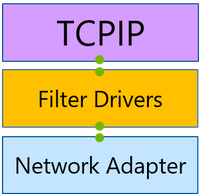 However, with the advent of network virtualization, the size of the networking stack has multiplied. This extended networking stack now includes components, like the Virtual Switch, that handle packet processing and switching. Such flexible environment allows for much better resource utilization and security isolation, but it also leaves more room for configuration mistakes that are hard to diagnose. Accordingly, a visibility within the networking stack is needed to pinpoint these mistakes, and PacketMon provides that visibility. 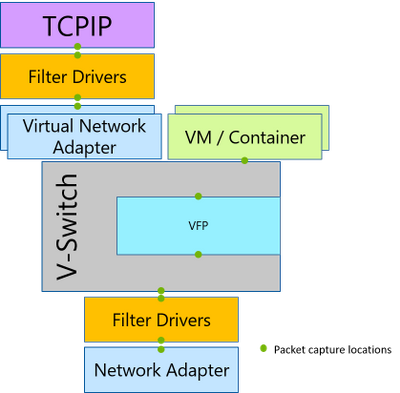 PacketMon intercepts packets at multiple locations throughout the networking stack, exposing the packet route. If a packet was dropped by a supported component in the networking stack, PacketMon will report that packet drop. This allows users to differentiate between a component that is the intended destination for a packet and a component that is interfering with a packet. Additionally, PacketMon will report drop reasons; for example, MTU Mistmatch, or Filtered VLAN, etc. These drop reasons provide the root cause of the issue without the need to exhaust all the possibilities. PacketMon also provides packet counters for each intercept point to allow a high-level packet flow examination without the need for time-consuming log analysis.

Packet Monitor is an in-box network diagnostics tool. It fills a gap in diagnosing virtual environments by providing visibility within the networking stack as it captures packets throughout the networking stack and reports packet drops. In subsequent posts, we will explore how to get started with PacketMon, and how to use it to diagnose specific scenarios. For documentation about PacketMon, please go here.