Turn on suggestions
Auto-suggest helps you quickly narrow down your search results by suggesting possible matches as you type.
Showing results for
Show  only  | Search instead for
Did you mean:
Deploying HTTP/3 on Windows Server at Scale
By 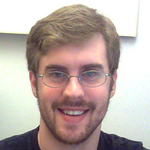 Windows Server 2022 was released for general availability last month. Since then, in cooperation with the Microsoft 365 team, we have started deploying the latest Windows Server on Exchange Online service front door servers globally, with a primary goal of adding support for HTTP/3 to https://outlook.office.com. We have only scaled the deployment up to 20% of capacity of front-end servers so far, but the data we are getting back is looking great! 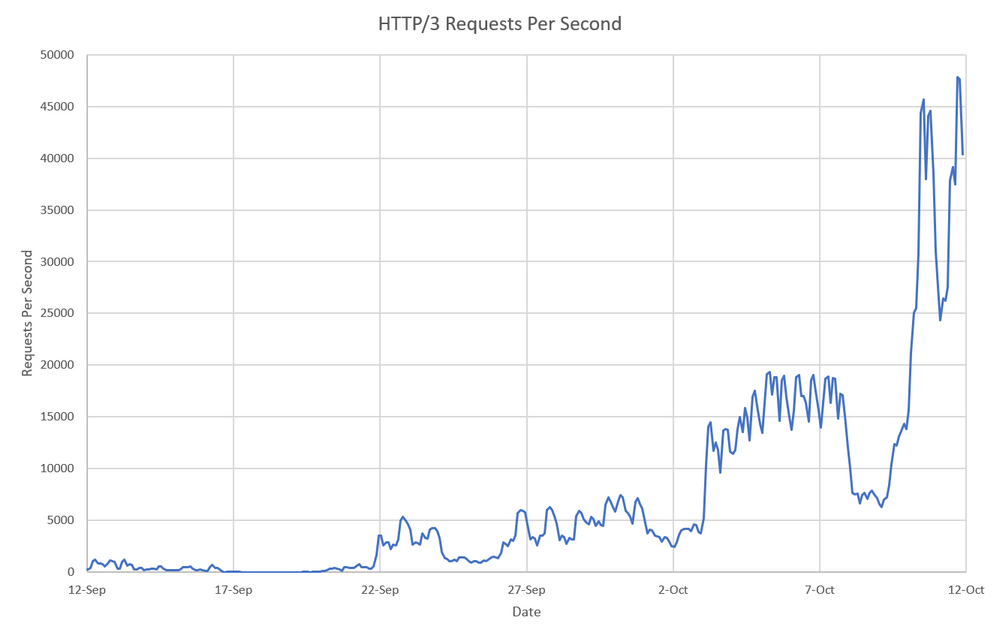 Total requests per second (RPS) have steadily increased in-step with the increased deployment to Exchange Online service front doors. Now that deployment is at 20% of capacity, we are seeing RPS spike nearly to 50k per second. Throughout the deployment we have been tracking the last-mile request latencies. The last-mile request latency is the time spent between the client and the front-end server; essentially request time minus any back-end communication and processing. Exchange Online service front doors support small request, small response workloads for various SPAs (Single Page Applications) such as Outlook on the Web where responsiveness is a key differentiator for user experience. 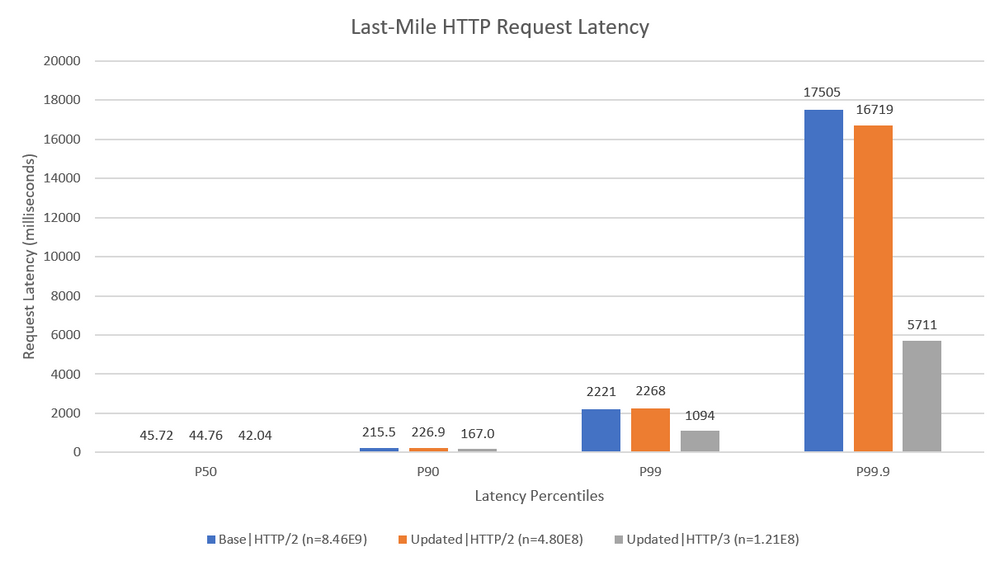 The latency data coming back has held firm throughout the deployment. As seen in the last-mile HTTP request latency data above, HTTP/3 is giving huge gains for Microsoft 365. An 8% reduction from the baseline at the 50th percentile is not bad, but over a 60% reduction at P99.9 is huge!

Why is HTTP/3 Better?

You will immediately ask why HTTP/3 has so much lower latency. Well, there are a lot of factors at play, most of which come from replacing TCP/TLS layers with QUIC.

To sum all this up, QUIC makes parallel work independent, improves the speed and accuracy of loss detection, and generally tries to be a better citizen on the network. As you can see from the data above, this results in HTTP/3 proving huge gains in responsiveness for Microsoft 365!

Trying Out HTTP/3 on Your Server

If you are currently on an older Windows Server using HTTP and want to try out HTTP/3 please take a look here. If you are using .NET instead, you can try HTTP/3 with the ASP.NET Kestrel web server, but be aware that it is still in preview.