Turn on suggestions
Auto-suggest helps you quickly narrow down your search results by suggesting possible matches as you type.
Showing results for
Show  only  | Search instead for
Did you mean:
Running USB Type-C System HLK tests with the Type-C MUTT
By

In the next release of the HLK, the UCSI tests have been updated to run against the new Type-C SuperMUTT device instead of a partner system. This means the test setup will be simpler, the tests will run more quickly, and test content will be more thorough than in Windows 10 April 2018 Update HLK and earlier. The new preview tests are only in pre-release HLK builds 17676 and higher.

The new test setup is simple: it requires a single Windows PC with Type-C, designated the System Under Test (SUT), and the Type-C SuperMUTT connected to one of the Type-C connectors on the system. See the image below. 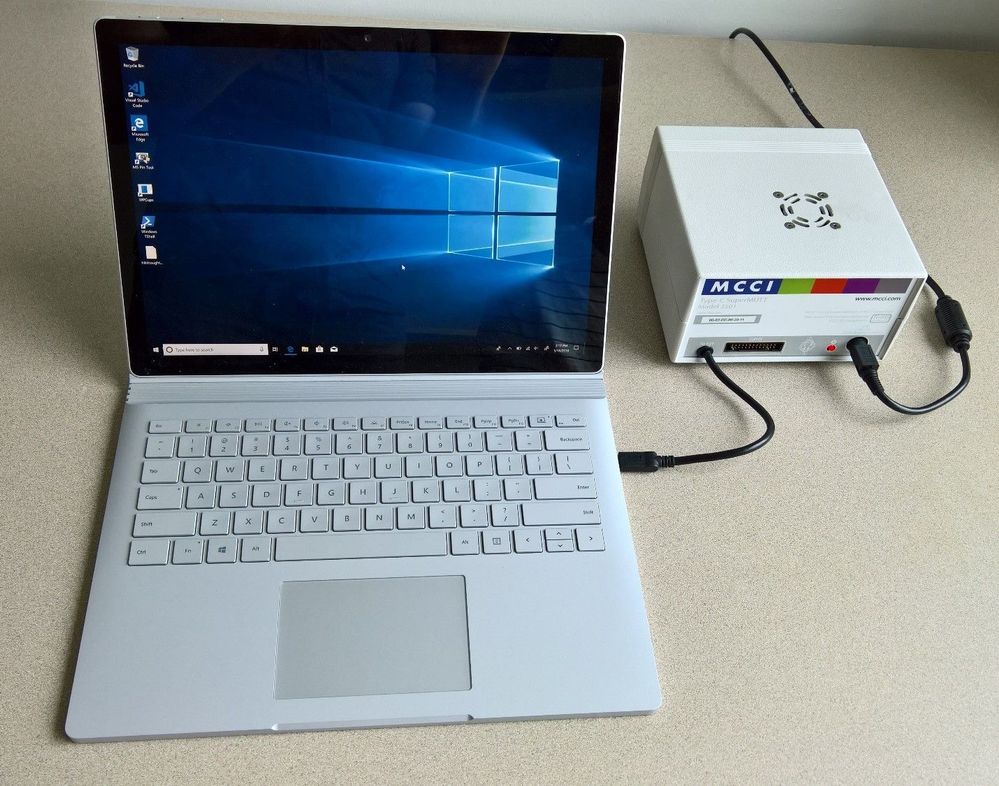 The Type-C SuperMUTT is the newest edition to the Microsoft USB Test Tool (MUTT) family of devices. It incorporates the functionality of the legacy SuperMUTT device as well as Type-C and PD functionality.

The software and firmware utilities are available in the MUTT Package download: https://docs.microsoft.com/en-us/windows-hardware/drivers/usbcon/mutt-software-package

And the tool is available for purchase through MCCI: http://www.mcci.com/mcci-v5/devtools/type-c-supermutt.html

Firmware version 45 or later, available in MUTT Package v2.6 and later, is required to run the UCSI HLK tests in the next release of the HLK.  See the TypeCSuperMUTT.pdf documentation in the MUTT Package download for more information.

Beyond a new name and a simpler test setup, what else is new in the tests? For the most part, the tests cover the same features in the same manner as the original tests did. However, there are some cases where the new tests will be more rigorous.

Take USB Operation Role tests for example. Many desktop UCSI systems do not support being set into the UFP role, though they may resolve to that role initially when connected to a pure DFP (such as a charger). This behavior makes it difficult to test every permutation of DFP/UFP/DRP connections that a platform may have to support if it is tested against a functionally equivalent peer device. However, with the Type-C SuperMUTT the test can deterministically place the Type-C SuperMUTT into a specific, known port direction or configuration before connecting it to the SUT and is thus able to provide more complete test coverage of USB Operation Role features.

Thus, there may be some test cases in next release of the HLK that are more thorough and thus uncover new platform quirks that Windows 10 April 2018 Update HLK and earlier test content did not.

This category of tests refers to all tests in the HLK with a name that begins with "UCSI" and is post-fixed with “[Type-C MUTT]”. The early pre-release HLK builds will include the original UCSI Compliance Tests as well, these tests have the same names, but without the “[Type-C MUTT]” suffix. Unless you are specifically running the old test for comparison, you should ignore the old versions of the tests.

How to identify Connector 1

In the next release of the HLK, the tests can be run against any available connector on the SUT, but you will need to specify the connector that the Type-C MUTT is connected to via the UcsiConnectorNumber parameter. If you do not know the connector numbers on a multi-port system, the UCSI Connector One Identification [Type-C MUTT] test can help you identify which is connector 1. If the SUT has 3 or more connectors, and you don’t know their mapping, you will simply need to experiment by connecting the Type-C MUTT to an unknown port, setting UcsiConnectorNumber to a new value, and running a test to see if the device is found on that connector; repeat with a new connector number until successful. This should just take a few attempts to establish the connector number layout for any new system.

The Type-C MUTT allows the HLK tests to emulate and automate all scenarios in next release of the HLK that previously may have required manual intervention.  You can select all of them at once, or only run a subset of them if you wish.

The UCSI Data and Power role swap tests require UcmUcsiAcpiClient.sys rather than TestUcsi.sys. If you plan to run the UCSI Data Role Swap or UCSI Power Role Swap tests in the HLK after this test, be sure to clean up your test environment after running the UCSI compliance tests. You can do this by replacing TestUcsi.sys with the original UcmUcsiAcpiClient.sys or by reinstalling Windows on both systems.