Turn on suggestions
Auto-suggest helps you quickly narrow down your search results by suggesting possible matches as you type.
Showing results for
Show  only  | Search instead for
Did you mean:
What's New in Notebooks - MSTICPy v2.0.0
By

This is a major version update and has:

To give you a feel for the feature changes in the release we've put together a notebook containing some of the features of MSTICPy 2.0. This is available at What's new in MSTICPy 2.0.

If you are new to MSTICPy or just want to catch up and get a quick overview check out our new MSTICPy Quickstart Guide.

MSTICPy is approaching its 4th birthday. It's first proper PR in Jan 2019 took it to a total of 7.5k lines of code! Some fun facts:

Geographical distribution of our GitHub likers 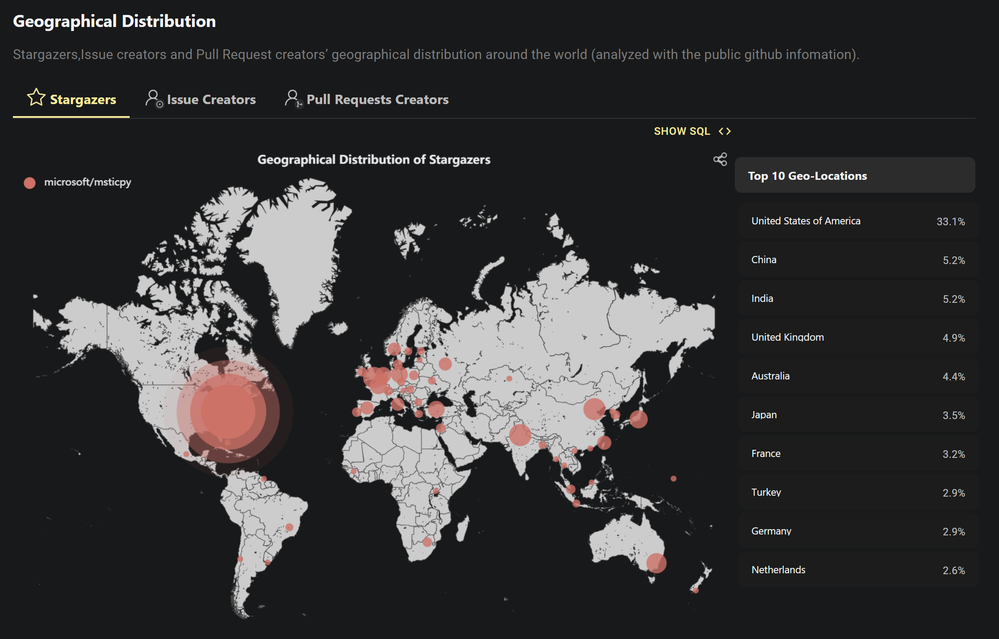 As of this release, we only officially support Python 3.8 and above. Python 3.6 is nearly 8 years old and is no longer supported by a lot of packages that we depend on. There are also a bunch of features such as dataclasses and better type hinting that we'd like to start using.

We will try to support Python 3.6 if the fixes required are small and contained but make no guarantees of it working completely on
Python prior to 3.8.

One of our main goals for v2.0.0 was to re-organize MSTICPy to be more logical and easier to use and maintain. Several years of organic growth had seen modules created in places that seemed like a good idea at the time but did not age well.

The discussion about the V2 structure can be found on our GitHub repo here: #320.

Due to the re-organization, many features are no longer in places where they used to be imported from!

We have tried to maintain compatibility with old locations by adding "glue" modules. These allow import of many modules from their previous locations but will issue a Deprecation warning if loaded from the old location. The warning will contain the new location of the module - so, you should update your code to point to this new location.

This table gives a quick overview of the V2.0 structure

Notable things that have moved:

If you are having trouble finding a module, we have added a simple search function:

Matches of module names will be returned in a table with links to the module documentation:

The root module in MSTICPy now has several modules and classes that can be directly accessed from it (rather than
having to import them individually).

We've also decided to adopt a new "house style" of importing msticpy as the alias mp. Slavishly copying the idea from some of great packages that we use (pandas -> pd, numpy -> np, networkx -> nx) we thought it would save a bit of typing. You are free to adopt or ignore this style - it has no impact on the functionality.

Many commonly used classes and functions are exposed as attributes of msticpy (or mp).

Also, a number of frequently used classes are imported by default in the init_notebookfunction, notably all of the entity classes. This makes it easier to use pivot functions without any initialization or import steps.

The Folium module in MSTICPy has always been a bit complex to use since it normally required that you convert IP addresses to MSTICPy
IpAddress entities before adding them to the map.

You can now plot maps with a single function call from a DataFrame containing IP addresses or location coordinates. You can group the data
into folium layers, specify columns to populate popups and tooltips and to customize the icons and coloring. 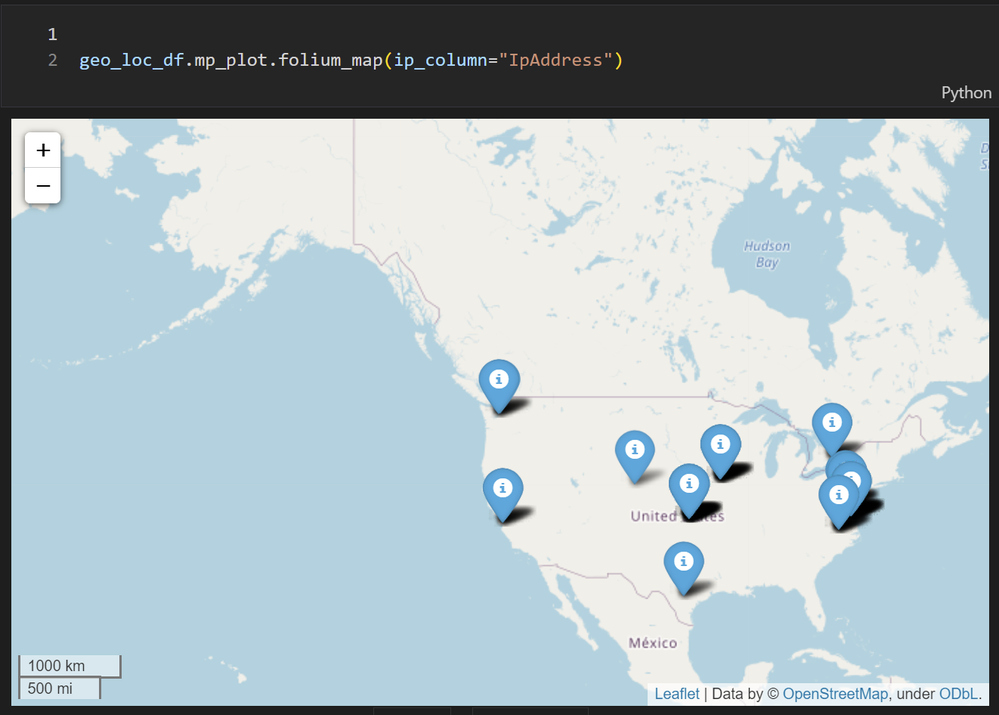 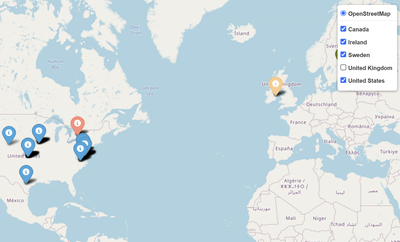 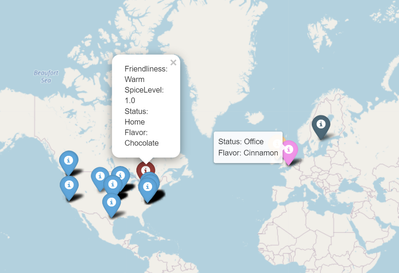 A new plot_map function (in the msticpy.vis.foliummap module) that lets you plot mapping points directly from a DataFrame. You can
specify either an ip_column or coordinates columns (lat_column and long_column). In the former case, the geo location of the IP address
is looked up using the MaxMind GeoLiteLookup data. 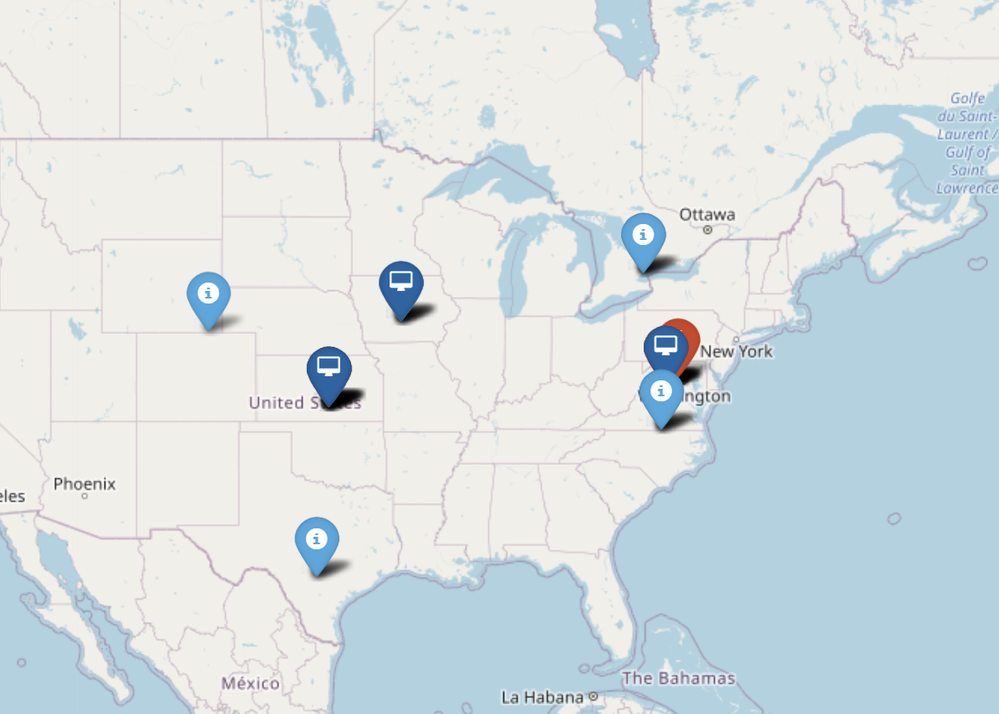 You can read the documentation for this function in the docs.

Plot maps from the comfort of your own DataFrame!
Using the msticpy mp_plot accessor you can plot maps directly from a pandas DataFrame containing IP or location information.
The folium_map function has the same syntax as plot_mapexcept that you omit the data parameter.

In plot_map and .mp_plot.folium_map you can specify a layer_column parameter. This will group the data by the values in that column and create an individually selectable/displayable layer in Folium. For performance and sanity reasons this should be a column with a relatively small number of discrete values.

Clustering of markers in the same layer is also implemented by default - this will collapse multiple closely located markers
into a cluster that you can expand by clicking or zooming.

You can also populate tooltips and popups with values from one or more column names.

The original FoliumMap class is still there for more manual control. This has also been enhanced to support direct plotting from IP, coordinates or GeoHash in addition to the existing IpAddress and GeoLocation entities. It also supports layering and clustering.

When you have configured more than one Threat Intelligence provider, MSTICPy will execute requests to each of them asynchronously. This will bring big performance benefits when querying IoCs from multiple providers.

Combining the progress tracking with asynchronous operation means that not only is performing lookups for lots of observables faster
but you will also less likely to be left guessing whether or not your kernel has hung.

Note that asynchronous execution only works with lookup_iocs and TI lookups
done via the pivot functions. lookup_ioc will run queries to multiple providers in seqence
so will usually be a lot slower than lookup_iocs.

TI Providers are now also loaded on demand - i.e., only when you have a configuration entry in your msticpyconfig.yaml for that provider.
This prevents loading of code (and possibly import errors) due to providers which you are not intending to use. 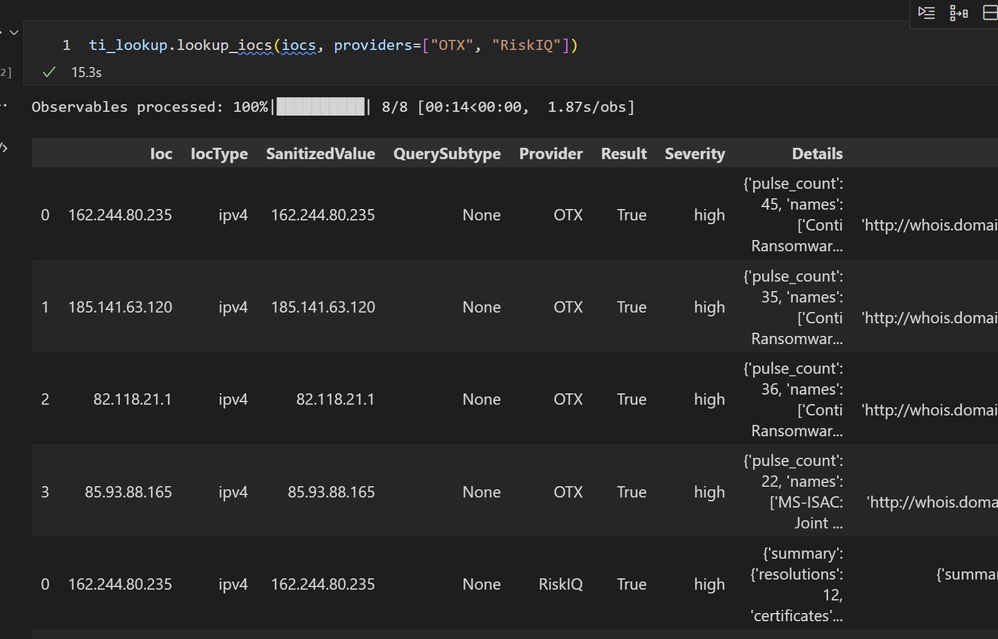 Although the Time Series functionality was relatively simple to use, it previously required several disconnected steps to compute
the time series, plot the data, extract the anomaly periods. Each of these needed a separate function import. Now you can do all of these
from a DataFrame via pandas accessors. (currently, there is a separate accessor -df.mp_timeseries - but we are still working on consolidating our pandas accessors so this may change in the future.)

Because you typically still need these separate outputs, the accessor has multiple methods:

See documentation for these functions. 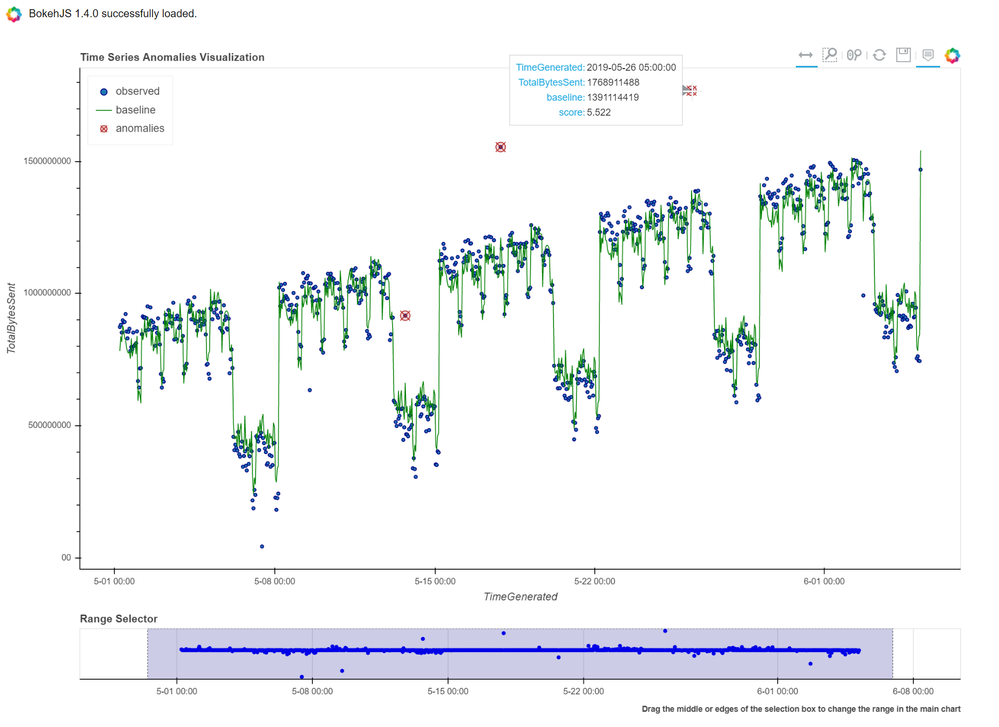 You can convert a pandas DataFrame into a NetworkX graph or plot directly as a graph using Bokeh interactive plotting.

You pass the functions the column names for the source and target nodes to build a basic graph. You can also name other columns to be node or edge attributes. When displayed these attributes are visible as popup details courtesy of Bokeh’s Hover tool. 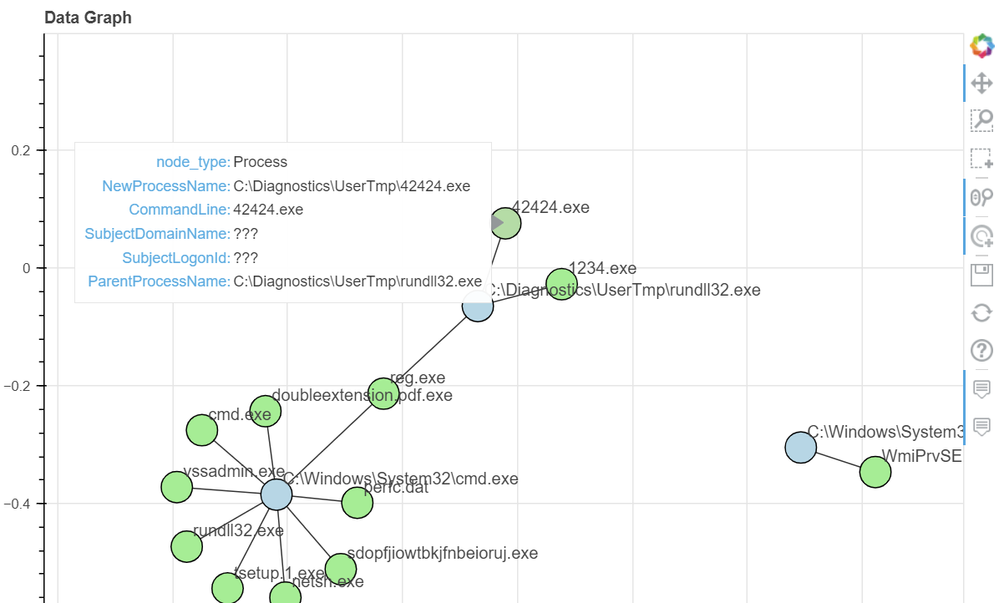 The pivot functionality has been overhauled. It is now initialized automatically in init_notebook - so you don't have to import and create an instance of Pivot. 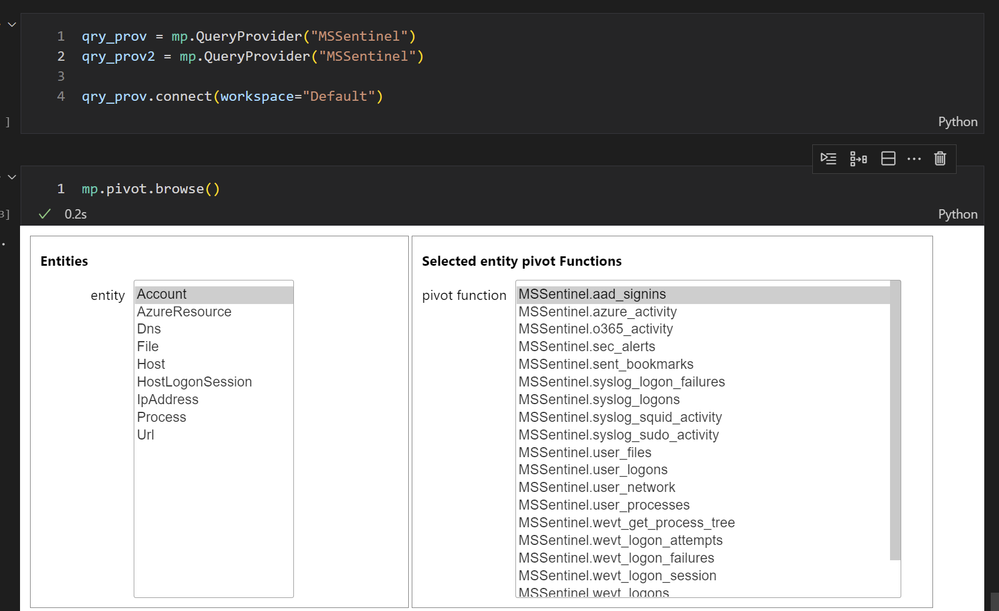 Previously, queries from data providers were added at initialization of the Pivot subsystem. This meant that you had to:

Data providers now dynamically add relevant queries as pivot functions when you authenticate to the provider.

Some query providers (such as MS Sentinel) support multiple instances. Previously this was not well supported in Pivot functions - the last
provider loaded would overwrite the queries from earlier providers. Pivot now supports separate instance naming so that each Workspace has a separate instance of a given pivot query.

The naming of the Threat Intelligence pivot functions has been considerably simplified.

VirusTotal and RiskIQ relationship queries should now be available as pivot functions (you need the VT 3 and PassiveTotal packages installed
respectively to enable this functionality).

A number of MS Defender queries (using either the MDE or MSSentinel QueryProviders) are exposed as Pivot functions.

Pandas accessors let you extend a pandas DataFrame or Series with custom functions. We use these in MSTICPy to let you call analysis or visualization functions as methods of a DataFrame.

Most of the functions previously exposed as pandas accessors, plus some new ones, have been consolidated into two main accessors.

Example usage (note: the required parameters, if any, are not shown in these examples)

One of the benefits of using accessors is the ability to chain them into a single pandas expression (mixing with other pandas methods).

From MPConfigEdit you can more easily import and update your Sentinel workspace configuration.

If you have a minimal configuration (e.g., just the Workspace ID and Tenant ID) you can retrieve other values such as Subscription ID, Workspace Name and Resource Group and save them to your configuration using the Resolve Settings button. 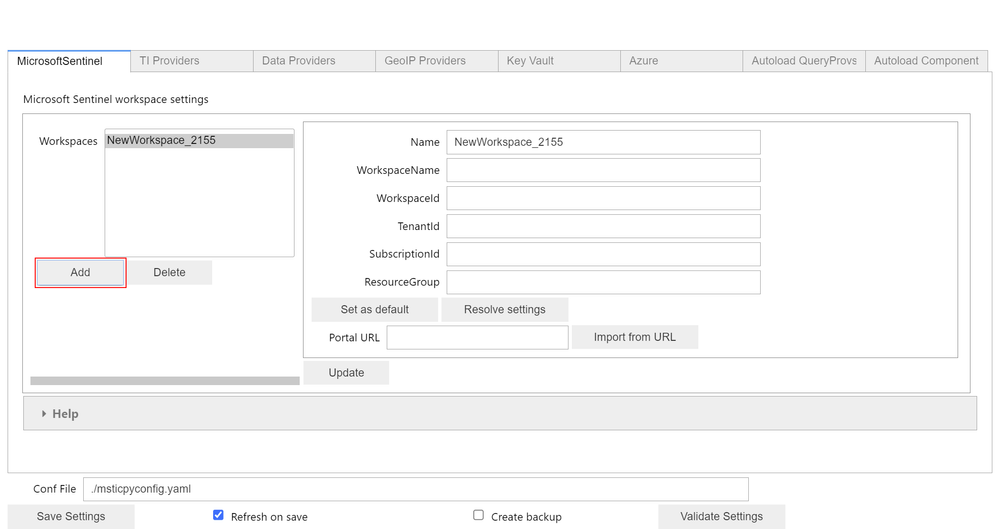 You can copy the URL from the Sentinel portal and paste it into the MPConfigEdit interface. It will extract and lookup the full details of the workspace to save to your settings.

The functions used to implement the above functionality are also available standalone in the MSSentinel class.

Since Sentinel now has the ability to import Microsoft Defender data, we've made the Defender queries usable from the MS Sentinel provider.

This is not specific to Defender queries but is a more generic functionality that allows us to share compatible queries between different QueryProviders. Many of the MS Defender queries are also now available as Pivot functions.

There are several changes specific to the MS Sentinel query provider:

Several new Sentinel and MS Defender queries have been added.

Over 30 MS Defender queries can now also be used in MS Sentinel workspaces if MS Defender for Endpoint/MS Defender 365 data is connected to Sentinel.

See the updated built-in query list in the MSTICPy documentation.

The documentation for V2.0 is available at https://msticpy.readthedocs.io (previous versions are still online and can be accessed through
the ReadTheDocs interface).

As well as including all of the new APIs, the API documentation has been split into a module-per-page to make it easier to read and navigate.

The API docs also now support "InterSphinx".
This means that references in the MSTICPy documentation to objects in other packages that support InterSphinx (e.g., Python standard library, pandas, Bokeh) have active links that will take you to the native documentation for that item.

The sample notebooks for most of these features have been updated along the same lines as the documentation. See MSTICPy Sample notebooks.

There are three new notebooks:

We are privileged to host Thomas's awesome ContiLeaks notebook that covers investigation into attacker forum chats including
some very cool illustration of using natural language translation in a notebook.

Thanks to Thomas Roccia (aka @fr0gger) for this!

Please reach out to us on GitHub - file an issue or start a discussion on
https://github.com/microsoft/msticpy - or email us at msticpy@microsoft.com