Microsoft Sentinel automation rules and playbooks allow analysts to better automate their incident triage and response processes to lower their SOC’s MTTR (mean time to remediate). Playbooks are triggered automatically when an incident is created, or on demand during the triage, investigation, and remediation processes. Playbooks are a powerful automation tool, as they can call almost any REST API-based external service which plays a role in the SOC’s processes. Though playbooks can be developed by SOC engineers, creating your own integration from scratch may take time and require deep understanding of the 3rd party products. Therefore, having out-of-the-box, ready-to-use playbooks is a huge time saver and enabler for new scenarios, which will eventually save a lot of time for the SOC.

Over the last year a lot of out-of-the-box playbook content has been added to Microsoft Sentinel. Now, it is easier than ever to implement security automation scenarios, improve SOC efficiency, and become a playbooks ninja!

Where SOAR integrations can be found?

Below are common automation scenarios and the available integrations you can now use to implement them in playbooks.

Fetch information from another service to add information to an incident. This information is usually added as a comment to the incident or sent to the SOC. Due to Microsoft Sentinel comments HTML and Markdown support, those comments can be formatted nicely.
Tip: Enrichment integration are great to prepare the incident for investigation. To improve SOC efficiency, attach enrichment playbooks as part of your automation rules which are triggered when an incident is created, so when analysts triage and investigate their incident relevant queries results and reports are already presented there. 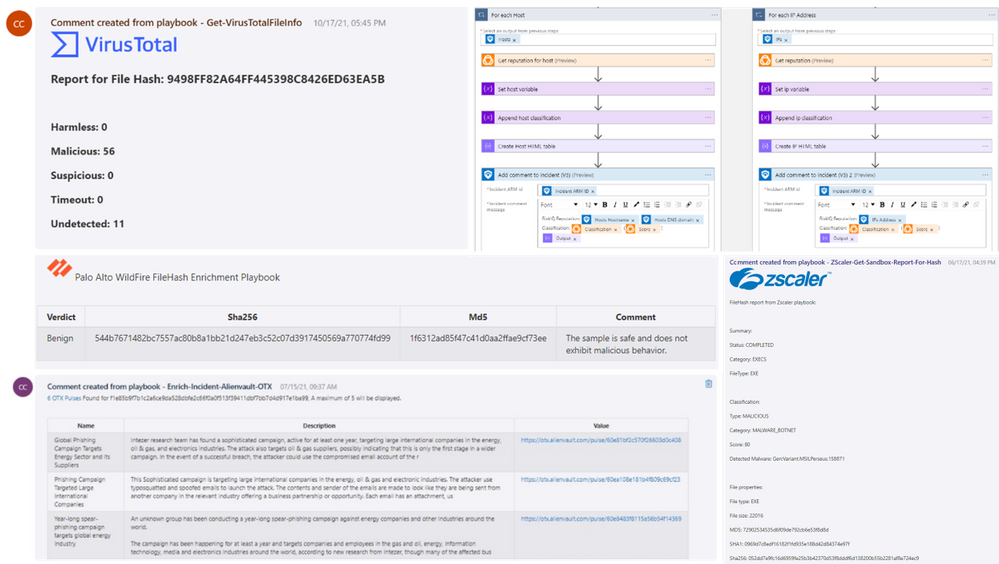 When an incident is created, create a linked ticket in your external ITSM.

Tip: An advantage for using playbooks for syncing incidents is that you can customize the fields mapping.

Quarantine endpoint, update policies, run scripts on endpoints and enrich incident with endpoint information. Audit the actions take as a comment to the incident. 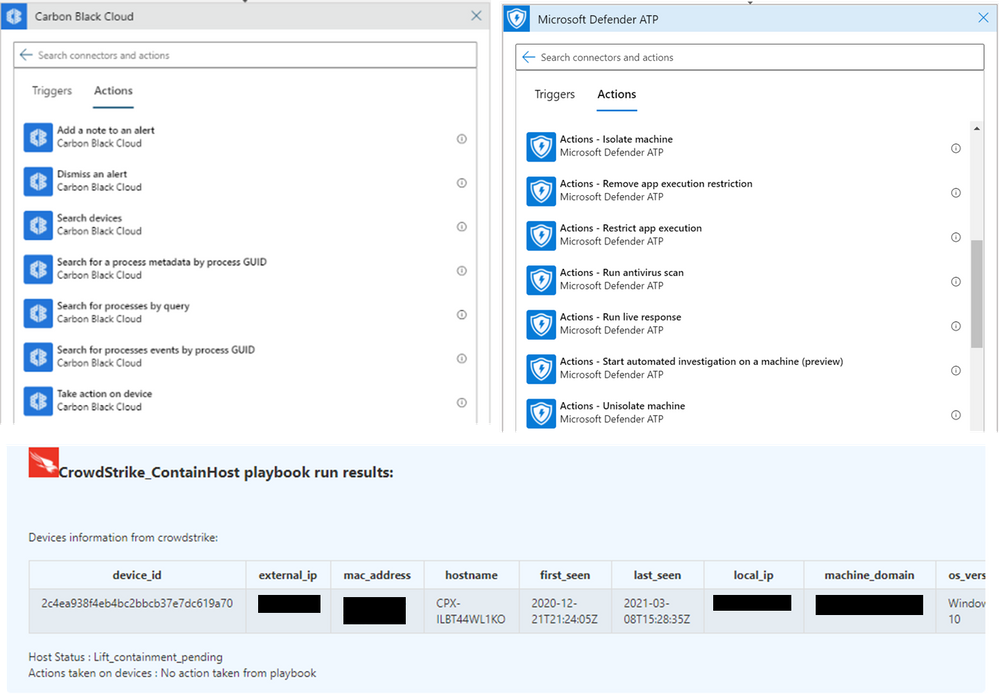 When a new incident is created, update firewall policies, network object groups or security rules to block traffic from suspicious Ips; Add domains and URLs to destination lists; Check if firewall rules already mitigated the threat and post a comment on the incident. 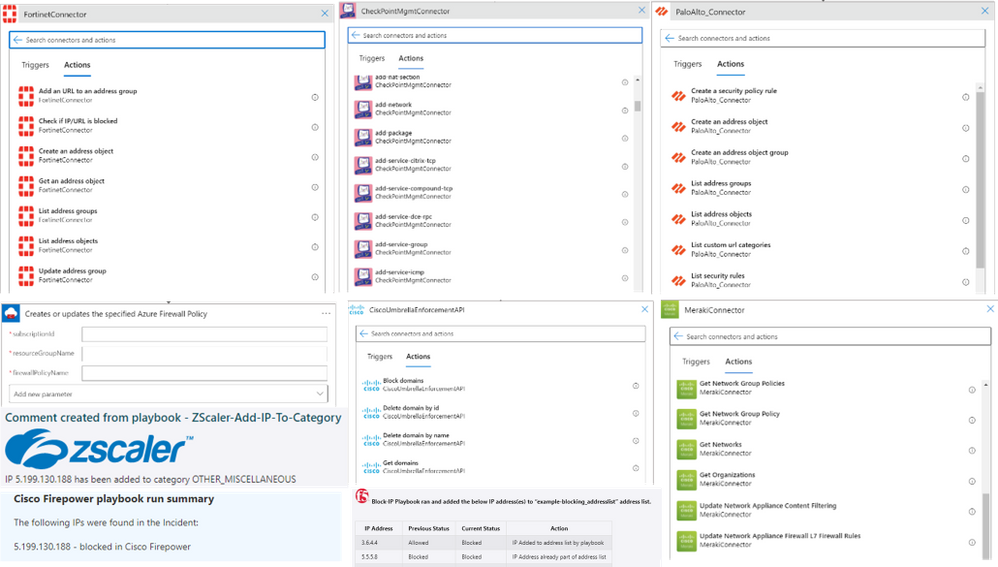 Playbooks can be attached to an automation rules to run when an incident is created, or run manually by the analyst during the triage, investigation and remediation processes.
For scenarios which require sensitive remediation actions, such changing firewall configurations or disable a user, we usually supply at list one playbook template which includes a human intervention step using Microsoft Teams adaptive cards.
For example, a playbook which blocks an IP in Azure Firewall would send to the SOC Teams channel a card with incident information and ip status in the firewall, and allows the analyst to take the decision if the IP should be blocked or not. 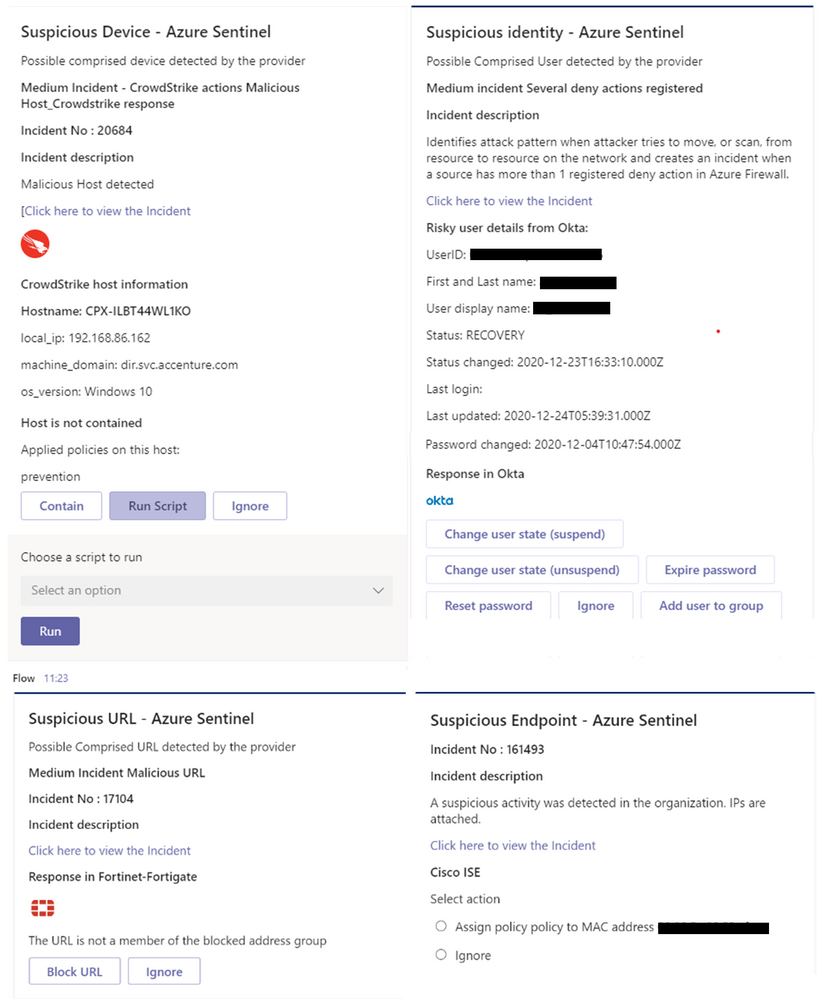 When an incident is created, playbook collects details from an incident and sends it to the SOC shared mailbox, chat channel in Teams or Slack, assigned user email or SMS. Analysts can quickly understand the severity, what tactics and entities are associated with the incident, and use the incident link to pivot directly to the specific incident page in the Microsoft Sentinel. 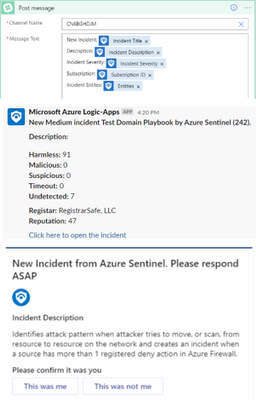