First published on TechNet on Oct 17, 2016
Microsoft is pleased to announce the release of the security configuration baseline settings for Windows 10 version 1607, also known as “Anniversary Update” and internally as “Redstone 1”. The downloadable attachment to this blog post includes importable GPOs, tools for applying the GPOs, custom ADMX files for “pass the hash” mitigation and legacy MSS settings, and all the settings in spreadsheet form. It also includes spreadsheets generated from Policy Analyzer that show differences from past baselines and brief descriptions of the reasons for the differences, and a similar spreadsheet listing the differences between the Member Server and Domain Controller baselines.

The .CAB files corresponding to these baselines for the Security Compliance Manager (SCM) are being worked on and should be available for download through SCM by the end of October. In the meantime, the downloadable materials on this blog post should provide most everything you need to move forward. We are also preparing an updated version of Policy Analyzer and hope to publish it soon. [ Update, 17-Nov-2016 : the SCM CAB files corresponding to these baselines are now published. Install and start SCM v4.0 on an internet-connected system: it will notify you that the new baselines are available if it is configured to check for updates automatically, or you can select "Check for updates" from the File menu.]

For those who have used the Local_Script tools in the download packages for previous baselines, we’ve changed its implementation. We used to copy GPO artifacts such as registry.pol files into the Local_Script directory and rename them. This time, the scripts reference the GPO files in their original locations. Because all GPO backup directory names are GUIDs, it can be difficult to identify which GUID is associated with which GPO. To help, we have added a simple PowerShell script that maps the GUIDs in a GPO backup directory hierarchy to the corresponding GPO names. This screenshot demonstrates: 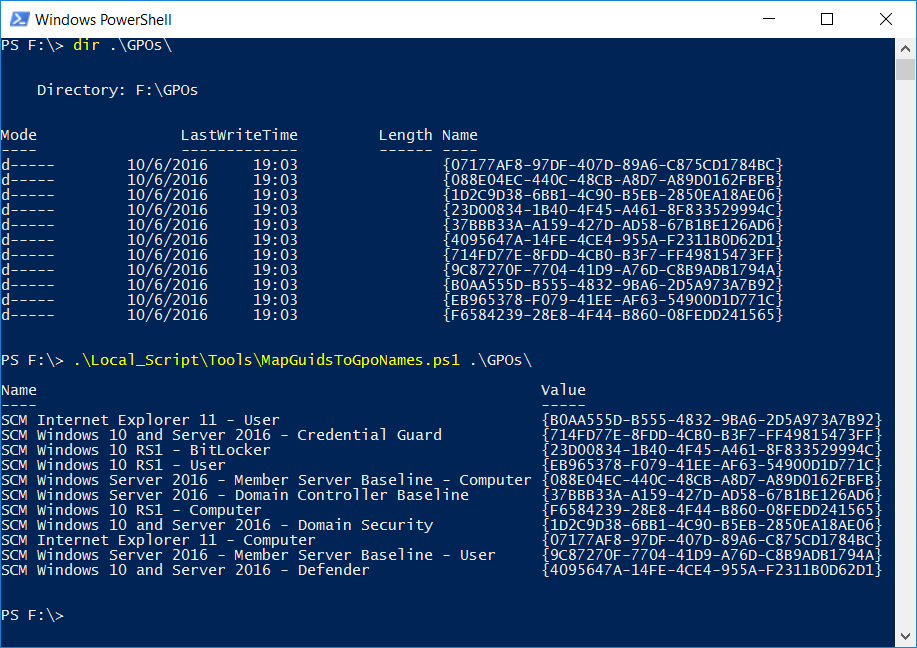