First published on TechNet on Nov 20, 2018
Microsoft is pleased to announce the final release of the security configuration baseline settings for Windows 10 October 2018 Update (a.k.a., version 1809, “Redstone 5” or “RS5”), and for Windows Server 2019.

The downloadable attachment to this blog post includes importable GPOs, a PowerShell script for applying the GPOs to local policy, custom ADMX files for Group Policy settings, documentation in spreadsheet form and as a set of Policy Analyzer files. In this release, we have changed the documentation layout in a few ways:

Highlights of the differences from past baselines, which are listed in BaselineDiffs-to-v1809-RS5-FINAL.xlsx:

We received and have been evaluating recommendations for more extensive changes to the baselines that we are continuing to evaluate for future releases.

We have replaced the collection of .cmd batch files for applying the baselines to local policy with a single PowerShell script that takes one of these five command-line switches to indicate which baseline you want to apply:

A couple of important notes about using the BaselineLocalInstall.ps1 script:


Windows 10 v1809 has greatly expanded its manageability using Mobile Device Management (MDM). The Intune team is preparing documentation about the Microsoft Windows MDM security baseline and how to use Intune to implement the baseline, and will publish it very soon. We will post information to this blog when that happens.
1 Like
Like
Share
7 Comments

I have small questions regarding the setting mentioned in each OS column , are these values the default which comes from Microsoft or they other values which are recommended to use to replace the defaults ??

in 2016 there was 2016 default column however it is not in 2016 Excel workbook attached with policy analyzer.

In the "baselines" spreadsheet, the values in the columns recommend that you explicitly configure those settings. In older versions of the baselines, there was a "default" column that was intended to describe Windows' default behavior if the policy wasn't configured. That column got removed because it was unreliable and unmaintainable.

@AaronMargosis_Tanium So those values are the defaults which settings have without any tuning or the values which should i change to ?

i want to compare developed policies setting with default one ? to know what is changed 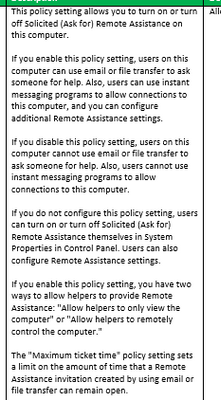 For example what is the default option if i didnot change any setting Enable/Disable/Not Configured ?? @AaronMargosis_Tanium  @Aaron Margosis

Those are the values that Microsoft recommends that you explicitly configure. In limited cases they are enforcing the default; in other cases they are strengthening beyond the default configuration. See the "Baseline criteria" section here (and in a few other blog posts) for a description of when defaults are enforced.

The description column you screenshotted is the same text that Windows shows in the Group Policy editor. It's usually accurate but not always.

After applying the 1809 baseline WS2019Member, I'm no longer able to connect to O365 using powershell, i.e., connect-msolserver, connect-azuread, connect-exchangeonline,etc). Attempting the connections results in a blank frame where previously you would enter your credentials.  It works fine prior to applying the baseline. Based on other suggestions that I've seen within this community and online, I have made changes to the IE configuration with no success. I apologize if I have missed the obvious solution to this issue and would appreciate any ideas.