One of Azure’s largest online conferences returned even bigger this year as Brazil’s technical community rallied to “uncomplicate” all things cloud.

The fifth edition of Uncomplicating Azure – or Descomplicando o Azure – expanded from one to two weeks thanks to the support of more than 40 expert presentations on Cloud, Dev, Data, AI, IoT, Productivity and more.

The online conference from June 15-26 expanded farther than South America’s largest country to include speakers from 11 countries. So far, the event's 35 hours of content has received 28,000 views and counting.

“Participating in communities is something that requires effort, constant learning, time, and dedication, but it is very rewarding when colleagues come to you to talk about having earned a new certification through a lecture tip or getting a new job or even solving a problem of project,” Rubens said. “Being part of communities is something that completes my daily life, strengthening me as an individual in society.”

The ability to connect different people of different backgrounds was a particular highlight, Rubens said, with speakers hailing from Russia, India, USA, Argentina, Chile, and other countries. The event’s multi-platform nature enabled for the addition of subtitles in several languages. 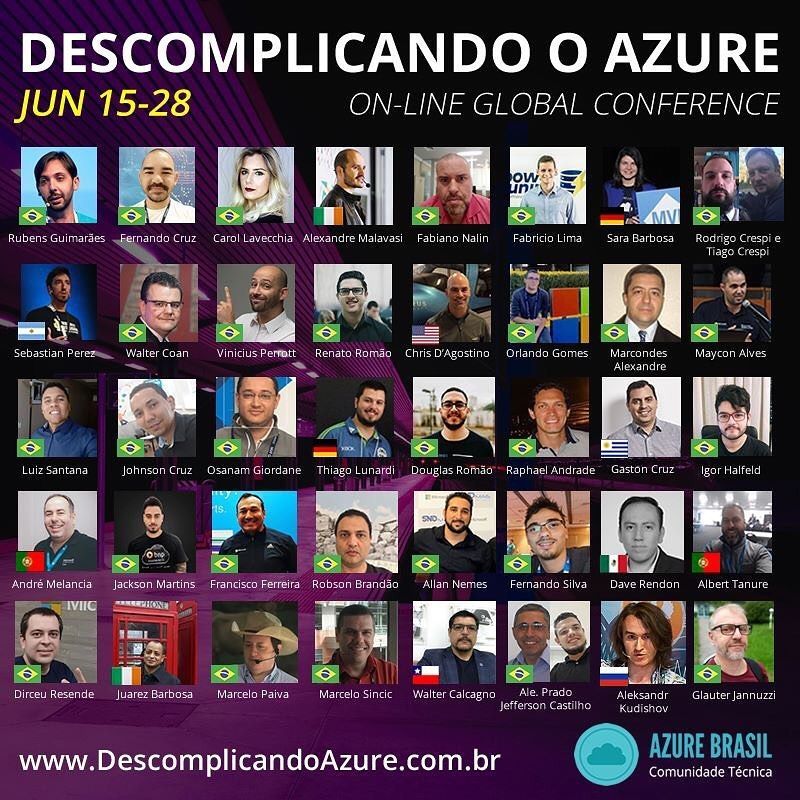 Especially in the context of Brazil’s ongoing battle against the pandemic, the conference served as a meeting ground for members of the technical community to reconnect with each other and the wider world.

“As usual, being part of the Microsoft Community is incredible – and even now with this complicated situation, Brazilians can keep warm and alive through webinars,” said Brazilian Sara Barbosa, who previously served as an MVP for Office Apps & Services before recently joining Microsoft as an FTE. “The energy and content each speaker shared were great. Even though Descomplicando o Azure has a focus on Azure, the diversity of presentations allowed customers, enthusiasts, and community folks to learn about a variety of Microsoft technologies such as SQL, Power Platform, and others.”

Similarly, Brazilian MVP for Data Platform Rodrigo Crespi reinforced the benefit of consistently learning from other like-minds at home and abroad. “Being part of a technical community allows me to meet and interact with the brightest minds in IT,” he said. “There were several important moments, but I highlight my great satisfaction in sharing the little of my knowledge with various people around the world.” Brazilian MVP for Data Platform Fabricio Lima agreed that the event further developed his professional skillset.

Irish-based MVP speaker Alexandre Malavasi praised the sheer breadth and depth of the conference speakers, noting that the diversity of themes meant any audience from students to company managers would find something of use.

“It is extremely rare to see an event that involves so many speakers, including those with international participation, being completely free to the community,” Alexandre said. “I am sure that the event contributed for IT professionals, in general, to understand more accurately the potential, extent, and possibilities that Azure can provide for the development of robust, resilient, high-performance, and cost-effective applications.”

US-based MVP Gaston Cruz said the conference’s international perspective would be useful to many going forward. “This event not only allowed people to learn but also to get a lot of new ideas of how to implement cutting edge technologies and leverage them to support business needs and transform them in the worldwide context that we are in now.”

Argentine-based MVP Sebastián Pérez said he enjoyed the engagement of attendees, with some even following up after his presentation for more information. Meanwhile, German-based MVP Reconnect member Thiago Lunardi said he simply enjoyed being back in the Microsoft community with other thought leaders. “For me, [the highlight] was the minutes before going live. I was out of the spotlight for over 2 years, and the feeling to be back contributing was like I had never left it behind. It’s great to be part of Microsoft community, just great.”

While Uncomplicating Azure is an annual event, Rubens said the organizing team was already looking for an adaptation to be held every six months. Check out the YouTube channel to watch presentations from the conference.