Ready or not, it is time once more to Reconnect!

This week we are joined by none other than the experienced senior field engineer and MVP Windows Client from 2003 to 2008 Thierry Frache! Hailing from Montpellier in the south of France, Thierry currently works as a technical director in an IT services company.

Whether it is online or offline, Thierry says he likes to help others and expand knowledge. For example, Thierry regularly volunteers for the French organization Secours Populaire which fights poverty in discrimination in public life.

Reconnect offers another opportunity to facilitate the exchanging of know-how, Thierry shares.

“I really like the idea of the Reconnect program because when I was an MVP, I felt like I was part of a team of experts. When you quit the program, it's a bit like a separation and there is no more exchange with Microsoft or the other MVPs. With this program, it is an opportunity to find old comrades and to reconnect with our old contacts at Microsoft,” he says.

Or, in English: "Enjoy the moment, don't put the pressure on yourself, and be proud of this award!" 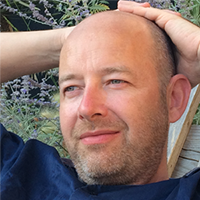