It’s not that often that we come across Microsoft superfans as dedicated and passionate as Sergey Zolotarev, a young programmer from Saratov, Russia. So much so that last month, a team of Russian MVPs and members of the RD community came together to make Sergey’s dreams of visiting Microsoft and meeting his virtual friends in real life come true.

Sergey, 19, has autism. Around one year ago, Sergey began connecting with various Russian MVPs, RDs and Microsoft FTEs on Facebook, and soon became an active member of those virtual communities. He would ask the community questions and publish posts about his work as a web developer. What always stood out was his love for Microsoft, and his dream to visit Microsoft one day - be it in the U.S., or in the Microsoft Moscow office, and to ultimately work at Microsoft.

In October 2019, members of the Russian IT community came together to make Sergey’s dream come true. After noticing how active and enthusiastic Sergey was in the online community, RDs and MVPs Alexandr Surkov, Alexey Lyubko, and Alexander Ermakov, along with others, invited him and his mother for a tour of Microsoft’s Moscow offices. 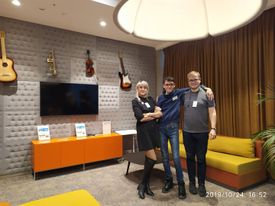 The community members involved put together a fundraiser to cover all of the necessary travel expenses of Sergey and his mother. In addition, on each of the days one of the MVPs or RDs would be Sergey’s personal guide around Moscow and across the respective IT offices they visited. Not only did Sergey get to see the offices, but he was also able to meet his Facebook friends in real life.

After establishing a plan to bring Sergey to Moscow, the MVPs and RDs involved reached out to their local CPM, Martin Tatar, to discuss how they could make his experience even better with Microsoft’s involvement. Coincidentally, that same week, two of the RDs were visiting Redmond, WA, and organized a meeting with Microsoft leadership.

While in Redmond, Arthur Yasinski met with Alexandr, Alexey, and Alexander (via Teams) from Russia, along with Pablo Veramendi from the Student Partner team. Both Pablo and Arthur organized an autographed shirt and a gift package from Scott Guthrie - Sergey’s role model! 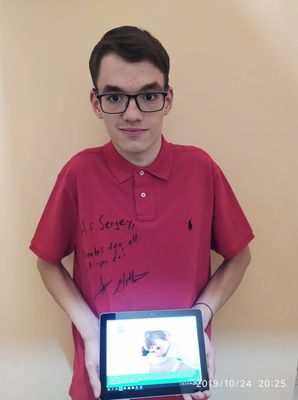 The team then used the time to discuss the tools that are available to Sergey in Russian, including MS Learn, VSCode, Docs.ms, and others. Pablo gave an overview of the Student Partner Program, and Martin and co. asked the Russian RDs and MVPs to encourage Sergey to reach out to them if he is interested in learning more. This also resulted in some great feedback on how the MVP program can be more inclusive for those not comfortable with English.

On October 24th, Sergey visited the Microsoft office in Moscow, which was organized as a complete surprise for him - he didn’t know where he was going until he had arrived at the train station!

He visited Microsoft’s office at Kryltsky Hills in Moscow, where Microsoft employees met him, gave him a tour round the office, and delivered the gifts from Redmond. Microsoft’s Cloud Advocate Dmitry Soshnikov and RD Alexander Ermakov showed Sergey around, and Martin dialed in via Teams and spoke to Sergey for 45 minutes. He visited Dodo Pizza headquarters, a popular Russian pizza company that uses Azure for its IT infrastructure, as well as Moscow’s skyscrapers to get a great view of the city.

Sergey was overjoyed with the experience, and was delighted to meet his Facebook friends in real life. During the tour, he also visited Yandex, saw self-driving cars, and listened to stories about how to start working at Russia’s biggest IT company.

“It was a great day at Microsoft, full of positive vibes and emotions,” said Alexander.  “We talked quite a lot about autism and how Microsoft approaches this selection of employees. Two team members from the HR department presented the HR processes, and Kristina Schastieva from the PR department guided us around the building.”

“We were also impressed by the virtual tour through the Prague office! That was really good. Dmitry Soshnikov also supported the tour, discussing DevOps topics and future products to focus on,” he added.

“Sergey was very happy. His mother told us she had never seen him smile so much in one day!” 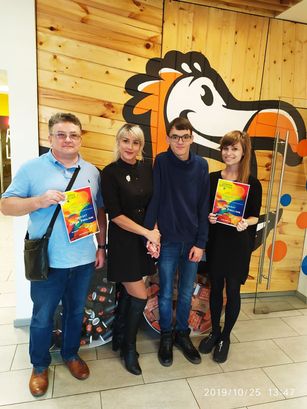 Alexandr Surkov, who was also involved in making this plan a reality, said “I think Sergey’s journey was very cool and him and his mom were really happy. And I am happy that a small story about one good guy got such great support from all of us. I think that is the real power of community!”

“Thanks again to everyone who helped make this a reality for Sergey!”

After such an amazing trip, Sergey is working even harder to achieve his goals. As well as using the Microsoft Learning portal for self-education, Sergey is also focusing on improving his English language skills with the help of DuoLingo. Martin and Dmitry are also in discussions with Microsoft Team’s accessibility unit on how Sergey can potentially provide product use case feedback. 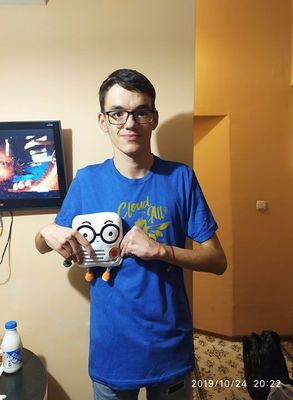 Sergey’s mother says that education is the biggest problem for people like Sergey in Russia. That’s where organizations like Microsoft can come in and do some serious good: By allowing them to develop and study what they are passionate about. Sergey’s story not only demonstrates the dedication and compassion of the Microsoft, MVP, and RD communities, but also how important it is to facilitate the development and learning of bright minds like Sergey. And who knows, maybe one day Sergey will be working at Microsoft himself and giving tours to young Microsoft superfans just like him!