Two groups of community members have pulled out all the stops to execute massive regional and global events showcasing the M365 platform.

In the spirit of coming together online during times of great uncertainty, two different city events for M365 Saturdays have grown far larger in scope to elevate international content from various voices.

M365 Saturday Melbourne, for example, became M365 May – a month-long event which showcased local ideas and innovation throughout Australia and New Zealand. Meanwhile, on the other side of the world, M365 Saturday Orange County evolved into Microsoft 365 Virtual Marathon. This 36-hour, multi-lingual event at the end of May attracted 12,000 attendees from 115 different countries.

The co-organizers behind M365 May – MVPs Megan Strant, Loryan Strant, and Rebecca Jackson – said expanding their Melbourne event from one day to one month was an exciting possibility as the conference went virtual. Over five weeks, more than 100 speakers created 88 hours of tech, business, and community-focused content for the more than 2000 registered attendees.

All of the speakers and attendees were awesome members of the community who were passionate about what they do, co-organizer Rebecca said. “I wanted to be part of the sort of event that I like attending and I think we achieved that,” she said.

“Not one of us could have done this on our own, nor would you want to. It’s like this beautiful jigsaw puzzle - each of us brings something to the table and together we pulled it off.”

Co-organizer Loryan agreed that it was satisfying to see the event come together. “Seeing the conference that was a loosely thought of idea turn into something so massive [and] become the epitome of what we wanted it to be … We built something that built itself, and that was amazing to be a part of.”

Co-organizer Megan concurred, adding that the team worked tirelessly to homeschool their children and deliver working hours in the midst of the month-long event. “One of the highlights was really having this connection, supporting people, and getting to know them,” she said.

MVP Darren Webster, who acted as video emcee and commentator for M365 May, said the entire event from inception to completion was an honor to be a part of. “It was amazing to see everyone as a team continue to get better about how the event was produced, and even how they found time between work and the conference to be able to engage with the attendees,” he said. Mark Powney, meanwhile, built the scheduling platform which powered the entire event. 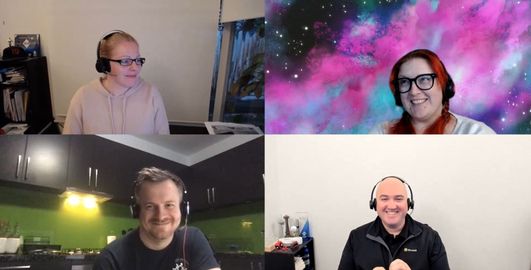 On the other side of the world in California, the team behind Orange County M365 Saturday faced similar decisions due to the ongoing pandemic.

Big is certainly the word to describe the resulting Microsoft 365 Virtual Marathon, which was a joint effort between SPC and the regional M365 Saturday team. The May 27-28 virtual marathon – which some have given the nickname of ‘Microsoft Woodstock’ – was put together in just two months with the support of more than 100 volunteers and 340 speakers.

Office Apps and Services MVP Juan Carlos González Martin presented in the Spanish track – along with Alberto Díaz, Gustavo Velez, Vladimir Medina, and others – and said the event highlighted the vast knowledge which is shared by volunteers and attendees all over the world.

“[I enjoyed] the passion of all the people part of this Global Microsoft 365 Community to share knowledge, best practices, and real-world samples and scenarios on how Microsoft products and technologies help every day and every organization to achieve more,” Juan Carlos said.

MVP Ai Hirano, who oversaw the Japanese track, said it was heartening to see the event embrace international perspectives and languages.

"It was very impressive that so many people from all over the world could work together to carry out the event," Ai said. "I was in frequent contact with [the organizers] and they were very considerate to us and quickly accepted our proposal. It was very encouraging to me and I would like to thank them again."

German MVP Hans Brender said the event itself posed technical challenges to overcome. “What started out as a small project was getting bigger and bigger. Not only the organizers learned, but also the speakers and volunteers were confronted with some challenges. My highlight was that I had almost no technical problems in all five sessions, I almost always landed on the dot,” he said.

“In South Africa we practice the spirit of Ubuntu – I am who I am because of who we all are. The culture of learning through sharing,” Alistair said. “This ethos is universal in nature and is ingrained in this community. Everyone is eager to assist, ready to reply to an email, or jump on a call to help people.”

This feeling of community was furthered by US MVP D’arce Hess. “I have always loved this community for being a family. From the moment I got started over ten years ago, I have always been welcomed. It has provided me opportunities that I never imagined including travel and being able to develop friendships with some of the greatest minds in Microsoft technology,” she said.

For more on both events, watch the recorded sessions from Microsoft 365 Virtual Marathon and M365 May on their respective YouTube channels.