Turn on suggestions
Auto-suggest helps you quickly narrow down your search results by suggesting possible matches as you type.
Showing results for
Show  only  | Search instead for
Did you mean:
All your creds are belong to us!
By

All your creds are belong to us!

A few days ago, our team helped someone who had been a target of account takeover (ATO). Despite protecting the account with mandatory two-step verification using SMS and the Authenticator app, attackers had broken into the account and changed the password.

In my last blog I explained how your pa$$word doesn’t matter - but multi-factor authentication (MFA) does! Several folks commented that “MFA isn’t a panacea.” That’s true in targeted attacks when attackers are willing to invest enough to break MFA, and there’s no easier way.

Let’s not get crazy - Multi-factor Authentication (MFA) is the least you can do if you are at all serious about protecting your accounts. Use of anything beyond the password significantly increases the costs for attackers, which is why the rate of compromise of accounts using any type of MFA is less than 0.1% of the general population.

Compared to password attacks, attacks which target non-password authenticators are extremely rare. When we evaluate all the tokens issued with MFA claims, we see that less than 10% of users use MFA per month in our enterprise accounts (and that includes on premises and third party MFA). Until MFA is more broadly adopted, there is little reason for attackers to evolve. But MFA attacks do exist, and in this blog we’ll confront them.

This was a specific and targeted attack with direct human involvement.

All Authenticators Are Vulnerable

There is a broad range of mechanisms to break authenticators, from simple guessing to coercion. That doesn’t make all authenticators equally vulnerable. Costs vary massively by attack type, and attacks which preserve anonymity and don’t require proximity to the target are much easier to achieve.

Unfortunately, virtually all authenticators in common use today – phones, email, one-time passcode (OTP) tokens, and push notifications – are vulnerable to relatively low-cost attacks involving takeover of the communication channel used for the authenticator (Channel-Jacking) or intercept-and-replay of authentication messages using a machine-in-the-middle (Real-Time Phishing). Unfortunately, both have been in the news lately  in some high-profile attacks (as well as in our caseloads). MFA bypass attacks are so rare that we don’t have good statistics on them – but when they do happen, they devolve to one of those two cases.

Here’s a list of common credential types with an assessment of vulnerabilities (excluding coercion, which is possible with all factors). If I learned anything from the last blog, several of you will share more ideas

Note: I am not covering server registered biometrics here as I consider it an anti-pattern (once a database of your fingerprint is breached, it invalidates use of your fingerprint on any other server), and reserve them for device unlock gestures (such as Windows Hello and the IOS and Android equivalents). I will blog on this issue separately.

Given low cost to attack, Channel Jacking and Real-time Phishing are the dominant ways we see non-password authenticators compromised.

Many authenticators rely on a communications channel to function. For example, when you get a code on your phone to type into the login screen, your phone – with all the associated mobile operators, infrastructure, customer support, and SIM infrastructure - is the channel. Often, an attacker can take over the channel as the simplest mechanism.

The most common channels in our consumer account system are emails (55%), text messages (44%), push notifications (4%) and voice calls (1%). Each of these mechanisms has the potential for Channel-Jacking. Each is backed by a provider account (email provider, phone company, or operating system vendor) which is vulnerable to password attacks, social engineering or bribery of support staff to greater or lesser degrees. 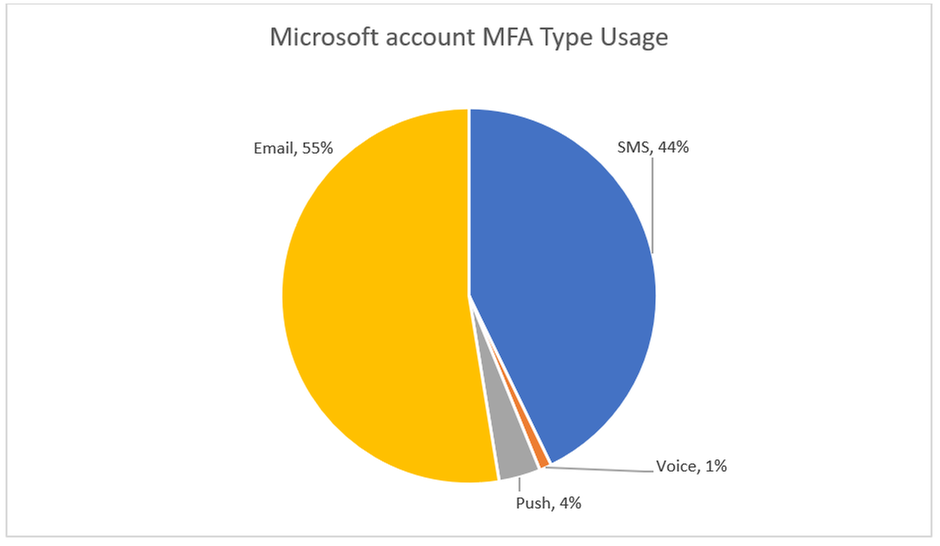 Mobile phones add a raft of additional radio communication and protocol vulnerabilities – an attacker can deploy a software-defined-radio to intercept messages, or a nearby FEMTO, or use an SS7 intercept service to eavesdrop on the phone traffic.

Removing the authenticator must have required another factor, so we asked the target to check their cell phone. Within a few minutes they confirmed that the SIM wasn’t working.

The mobile operator’s customer support team had been tricked into porting the target’s SIM to an attacker-controlled phone.

Again, such attacks are extremely rare when compared to password only attacks, and even SMS based authentication prevents the vast majority of even targeted attacks . But beware  of a channel that can be eavesdropped, phished, socialed, bribed or password-guessed out from under you. If you use email or mobile phone number for your recovery mechanism on other accounts, harden them as much as you can – most mobile operators, for example, offer opt-in additional security like PIN codes or OATH authenticator support, and you can use non-password authenticators on your email-based recovery account.

The chain of trust breaks at its weakest link – this is often the communications channel. Compare your cell phone, with its support and protocol vulnerabilities allowing intercept of unencrypted traffic to something like FIDO, where OS level malware is required to even snoop on the encrypted traffic in the exchange. At this latter level of security, the authenticator is functionally channel independent – and that’s what it takes to beat Channel-Jacking.

As smart admins are requiring their users to use MFA, some phishing has advanced to fully replay the requests from the site it is impersonating. Tools like Modlishka are making it easy. This is sometimes called “real-time phishing,” and relies on bringing the user to an attacker controlled “machine in the middle” (MitM). Our mail systems are detecting a huge increase in phishing mails, though we can’t say how many of these are leveraging Real-Time Phishing.

Visually, I think of the MitM as Janus, the Roman god of transitions. Janus is a two-faced god; in this analogy, one face emulates the client to the login server, and the other the login server to the client. Our MitM simply repeats whatever it hears from either party to the other. 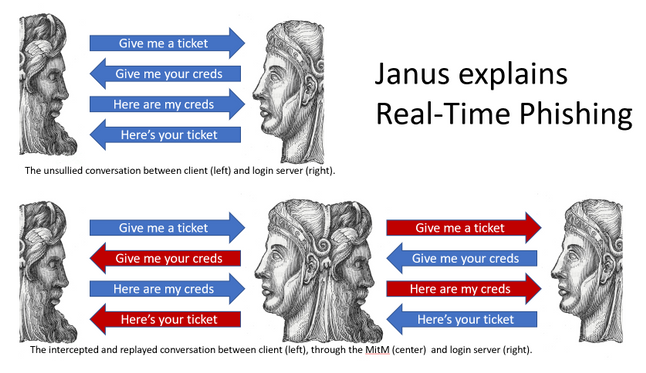 With tools like Modlishka, the MitM can repeat everything it hears from one party to the other. Once lured to the site, the client’s only hope of defeating the attack lies in recognizing that the login server is a fake – something humans are notoriously bad at , even when the browser warns them they are dealing with a fake site.

The target’s password had already been compromised, probably via Phish, Spray, or Stuffing.

So when the attacker channel-jacked their phone, it was game-over.

Put simply, ANY authenticator which doesn’t cryptographically verify that the login server is who it says it is can be phished.

We immediately locked the target’s account, and because we had definite proof of identity, we were able to restore the account with new, valid authenticators.

Hope on the Horizon?

In recognition of the fundamental vulnerability of human users to trickery in social and phishing attacks, channel independent, verifier impersonation resistant authenticator types have emerged. Chief among these are Smartcards, Windows Hello, and FIDO. From a security perspective, these credentials are incredibly hard to crack, though they do offer issuance and recovery challenges I will explore later.

Ultimately, our target’s accounts were restored. The mobile operator account was hardened with a PIN, and the Microsoft account SMS number was replaced with a FIDO token.

Given an overall strong authentication rate of only about 10%, doing any form of MFA takes you out of reach of most attacks. MFA (using any mechanism) is just too costly to break - unless a highly motivated attacker is after that high value account or asset. That’s where verifier impersonation resistant authenticators come in. These “phish proof” authenticators are resistant to everything but coercion – and for all but the most determined and well-funded attackers, coercion – with all its associated risks and costs – is too high a price to pay, and pushes even motivated attackers (at long last) away from credential attacks.

You should definitely turn on MFA now  – and anything is >99.9% better than nothing. If you are using a phone as second factor, harden that account. Better yet, use the Microsoft Authenticator as the mechanism is channel independent, has great usability, and is free to deploy (we are working on verifier impersonation resistance now). And start building a long-term authenticator strategy which hinges on channel independent, verifier impersonation resistant authenticators like Windows Hello and FIDO.

Stay safe out there,