Turn on suggestions
Auto-suggest helps you quickly narrow down your search results by suggesting possible matches as you type.
Showing results for
Show  only  | Search instead for
Did you mean:
Configuring Microsoft Defender Antivirus for non-persistent VDI machines
By

Virtual Desktop Infrastructure (VDI) brings an interesting dynamic when tuning the platform. The delicate balance of performance and usability are key to the user experience and can require fine tuning of all sorts of items in Windows. Antivirus can also benefit from VDI specific configurations and tuning. Among all other settings, it's crucial to ensure antivirus protection on the device is configured optimally.

To ensure you have protection for VDI machines at first boot, follow these recommendations:

As described in the first VDI post, non-persistent VDI machines generally don’t use a configuration management solution like Microsoft Endpoint Manager because they don’t persist their state (all changes to the VDI machine are lost at logoff, reboot, or shutdown). This means the usual recommended delivery mechanism for security intelligence updates can’t be used. Fortunately, you have options to configure how the updates are delivered to Windows. The settings can be accessed in the local group policy editor at the following path:

Note: Depending on the release of Windows the ADMX template can vary and the path will either be “Windows Defender Antivirus” or “Microsoft Defender Antivirus” in the latest templates. The Define the order of sources for downloading security intelligence updates setting is what you should configure first. There are four ways the update can be delivered to the VDI machine:

These are the only possible values for the setting. You can configure the order that VDI machines will check these locations by listing them in the preferred order and delimiting them with the pipe (|) character. Guidance on configuring this setting is documented here.

For VDI, the most optimal choice is to have the non-persistent machines fetch the security intelligence update from a file share on the LAN. The recommended setting would look like this:

Steps 3 and 4 can be swapped if you have a Windows Server Update Service (WSUS) server that hosts the updates. As noted in the guidance, security intelligence updates (formerly MMPC) should be a last resort, due to the increased size of the updates. In a case where there is no WSUS server in the environment, in the local group policy editor, the setting will look like this: 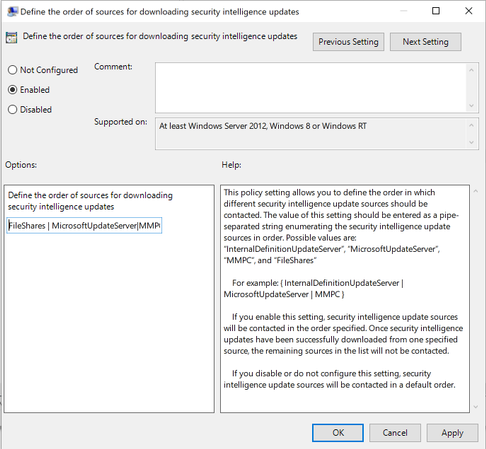 When a preference order is set for the VDI machines, it’s important to understand how to get the security intelligence packages to the file share in question. This means that a single server or machine must fetch the updates on behalf of the VMs at an interval and place them in the file share for consumption.

Ensure that the server or machine that is fetching the updates has read/write access to it so that it can write the security intelligence updates into the wdav-update folder. General guidance on how to download and unpack the updates with a PowerShell script and run it as a scheduled task are here.

In addition, there are some other things to consider for this operation and tie them all together. I’ve written a sample PowerShell script (based on the guidance) that can be run at an interval as a scheduled task. The script takes the following steps:

When the file share is all set up and populated with the updates, you can configure a few things on the VDI master. Remember to configure these settings in the VDI master so that the child VDI machines will have the settings at first boot. The settings can be viewed in the local security policy editor here:

In this tree of the editor there are a couple of settings to configure and they are listed below.

Note: This setting requires a reboot of the VDI machine for it to take effect. This is why it is critical to include it as a first boot policy. Manual signature updates via mpcmdrun -signatureupdate or via the Update-MpSignature PowerShell cmdlet are disabled when using this setting. Here is a snip from the MPLog (located in C:\ProgramData\Microsoft\Windows Defender\Support) after enabling the setting:

Note: Defining a security intelligence location only works in Windows 10, version 1703 and above. If you are running 1703 or later, then you can enable this setting, but be aware that the VDI machines expect the extracted security intelligence update to be available at the following location:

This is why in the PowerShell sample, not only do we copy the compressed security intelligence package (mpam-fe.exe) to the share, but we also copy the extracted contents of it as well. Since we copy both the package and the contents, we can point any version of Windows 10 to the same share for the security intelligence updates.

If you see an access denied message when trying to update security intelligence in the operational log, check the share and NTFS permissions that were mentioned above. 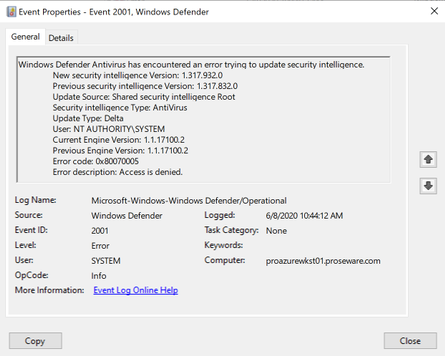 For VDI systems with the Define security intelligence location for VDI clients setting enabled, they will look at the following path for updates:

For VDI systems (or physical machines that will use a file share) that DO NOT have the Define security intelligence location for VDI clients setting enabled, they will look at the following path for updates:

This is why the x64 directory is required. This is detailed in the MPLog (located in C:\ProgramData\Microsoft\Windows Defender\Support):

For this example, I’m removing security intelligence package downloads (via the PowerShell sample script) from the file share that are older than 7 days, so I’ve also set this setting to 7 (since I only keep 7 days’ worth anyway).

Tying it all together

In summary, we’ve configured a scheduled task on a designated machine to fetch, extract, and place the compressed and uncompressed security intelligence packages in a file share. Non-persistent VDI machines are pointed to this share in order to fetch the updates. We also went over a few of the bare minimum settings to provide first boot protection for non-persistent VDI machines, as well as a few other settings that should be optimized for them. Automation is definitely the glue here that keeps all of this together.

From the VDI master perspective, fold all of these settings together either in the registry or by using a local group policy object.

Hopefully, this helps you test, optimize, and deploy Microsoft Defender Antivirus on your non-persistent VDI pools! Let us know what you think by leaving a comment below.