Windows Defender ATP provides a great hunting experience out of the box. Analysts can search over process events, network events, logons, registry activity, and more.  In this post, I will show how analysts can go even further by using the WDATP APIs. If any of the following scenarios are interesting to your security operations team, then this post is for you:

Normally when one hears the word “APIs”, one thinks of a developer feature that requires compilers and SDKs. This post will show two features that make these APIs approachable to SOC analysts—Python support and Jupyter Notebooks.  Even though this post focuses on Python, you can call the APIs from PowerShell, C#, or any language that can call REST endpoints.

The first step is deciding on how you want to access the APIs. WDATP uses standard OAuth2.0 authentication.  To get started, perform the following steps:

A list of the exposed APIs can be found here. In this post, we’ll focus on running some advanced hunting queries, and then calling the API to get further information on machines and users.

After registering your app, you have all you need to call the APIs: your WDATP Tenant ID, an App Id and App Secret created during registration.  Here is the code to authenticate to the WDATP endpoint:

This code shows calling the API to get recent alerts.

Now that you know the basics of getting up and going, let’s walk through a few different scenarios. To make it easy to repeat these scenarios, we will use a Jupyter notebook to encapsulate them. There is nothing about the APIs that requires Jupyter, but you may find it to be a handy tool when working with Python and the APIs.

If you’re familiar with Jupyter Notebooks, you can skip this paragraph.  If not, Jupyter Notebooks are an open source project designed to make interactive computing and sharing re-usable analysis easier. There are over 3 million notebooks shared on GitHub. There is an annual conference and support for both local and cloud versions by every major cloud provider. While many use cases for notebooks surround data science and machine learning, they are an excellent infosec investigative tool for exploration, visualization, and analysis. Let’s jump right in!  If you want to follow along, download the notebook from the WDATP GitHub: WDATP API Jupyter Notebook.

Place the notebook you downloaded from GitHub in the notebook directory. You can find the default notebook location by looking at the output from launching Jupyter:

To orient first time users, here are the basics.  A notebook is composed of input and output cells.  In the example below: 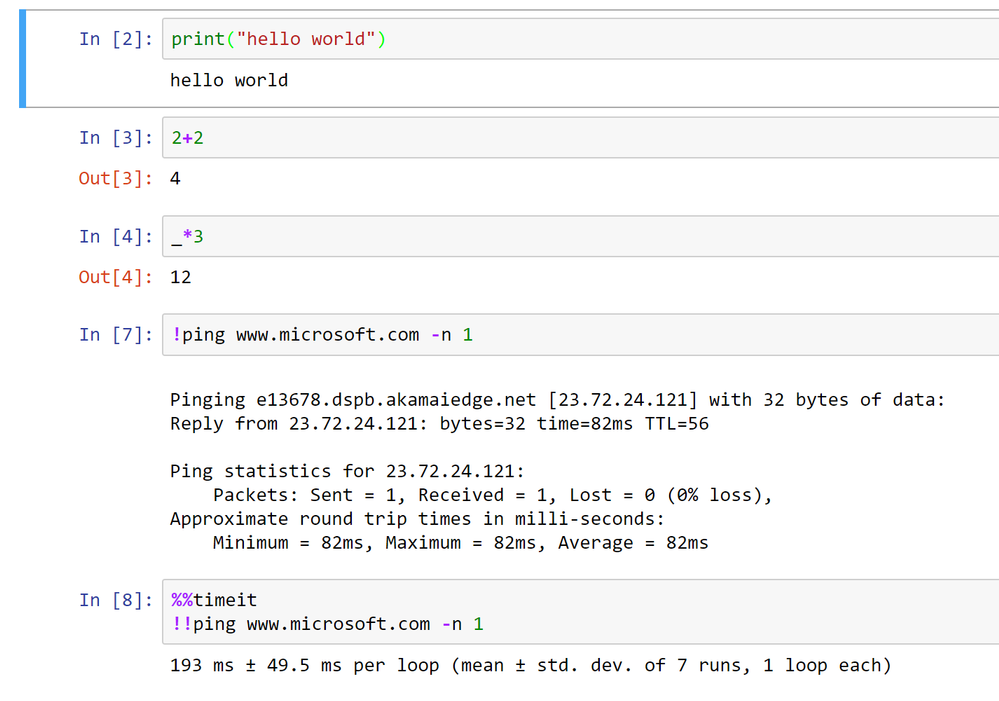 Jupyter basicsInstalling the sample from GitHub

To install the sample code, run the following cell by hitting Shift+Enter.

Initialize the WDATP endpoint by passing in your tenant Id, and app information. Then query for the top 5 alerts. The notebook will automatically format the results in a HTML table.

Let’s start by getting some alerts.   You can use the standard OData syntax when querying some of the WDATP entities.

By default, this sample saves the results from API calls in a convenient tabular data structure called a Pandas DataFrame. Pandas is an open source package tailored for working with structured data.

To show the power of using Python and open source packages like Pandas, we’ll show how to do a simple count of alert frequency and render the results in a pie chart. This also shows that the notebook can include pictures and not just text output.

The Role of Magics

There is a time and place for code, but sometimes you want a simpler way to access data. The API wrapper in this sample has several Jupyter magics created for just this purpose. Magics are just shortcuts to invoking code on your data.  Use the %wdatp_alert magic with a valid Alert ID from your WDATP data. The below command also shows assigning the alert data to a variable (alert_df) and then rendering it in a vertical view by invoking the Pandas transpose function on it (alert_df.T).

The below example shows invoking the wdapt_ip magic. There are two kinds of Jupyter magics. Line magics start with a single % and operate on the input right after the magic name. The %wdapt_alert command we just invoked is an example of that.  By prefixing a magic with two % signs, it is invoked as a cell magic and operates on the entire contents of the cell.  One feature of %%wdatp_ip is that it will scan through the cell text and use a regular expression to find any data that resembles an IPV4 address. This is handy where you might have an email or webpage with the IPs you need to query. While you can copy and paste them individually, it is sometimes faster to just grab the entire paragraph containing them, paste them into a cell, and the magic will do the work to extract them properly.

WDATP collects a rich set of data from endpoints and makes it available for hunting in the portal. You can also perform hunting queries with the API. This is a powerful feature that allows you to build automation around hunting scenarios.

In the example below, we get the most recent alert and then construct a query to get relevant records around the time of the alert from process creation events, network activity, and file creation activity. One could build on this to create triage scripts that automate common steps for responding to alerts.

In the example below we have a query that searches for machines and their associated outbound communication patterns. It then renders the machines and the IP ranges they communicate with in a Chord diagram.  This kind of analysis might be handy to take a population of machines that should be communicating similarly because they are all the same role (for example Domain Controllers) and spot outliers.

The code uses the holoviews library to do the visualization.

Holoviews has a wide variety of visualization options. We can render the same data in a Scatter plot. This allows one to quickly identify netblocks that are commonly communicated to by many machines and also see IP blocks that have only one or two machines communicating with them.

Enriching WDATP data by calling other APIs and services

In this section we will show how you can call other APIs to enrich WDATP data--in this case VirusTotal (VT). If you don’t have a VT API key, you can sign up for one for free here. You pass in your VT API key to the sample by creating the WDATP endpoint as follows

In this example, we query WDATP for hashes of files to gain additional context.  The query collects SHA1 file hashes from WDATP Alerts. By querying what VT knows about the hashes, we may gain additional insight.

Next, we’ll take any file hashes where VT had results and query WDATP data to enrich it. The below shows querying the files API to get global prevalence information and combining the results with a link to the VirusTotal webpage for the file.

In this post we walked through how to get started with the WDATP APIs. Because the APIs are exposed as REST endpoints they are simple to call using Python or other languages. The Jupyter Notebook is a useful open source package that makes it easy to interact with data and save the results in a reusable notebook that is easy to share with others. We look forward to what you’ll do with the APIs and the notebooks you’ll create!

The author would like to thank Eric Hutchins (@killchain) for introducing him to Jupyter notebooks.