Last June, we reported on a cryptocurrency mining campaign that targeted Kubeflow workloads. Kubeflow is a popular framework for running machine learning (ML) tasks in Kubernetes, started as a project for running TensorFlow jobs on Kubernetes.

Recently, we discovered a new campaign that also targets Kubeflow deployments. Similarly, the attackers use exposed Kubeflow interfaces for running cryptocurrency mining containers, with some changes from what we’ve previously seen:

Towards the end of May, we observed a spike in deployments of TensorFlow pods on various Kubernetes clusters. The pods ran legitimate TensorFlow images, from the official Docker Hub account. Looking at the entrypoint of the pods, revealed that they aim to mine cryptocurrency.

The burst of deployments on the various clusters was simultaneous. This indicates that the attackers scanned those clusters in advance and maintained a list of potential targets, which were later attacked on the same time.

This is not the first time we see attackers use legitimate images for running their malicious code. Particularly in this case, the existence of TensorFlow images in the cluster makes a lot of sense: It’s not uncommon to find TensorFlow containers in a ML workload. If the images in the cluster are monitored, usage of legitimate image can prevent attackers from being discovered. Also, the TensorFlow image that was used is a convenient method to run GPU tasks using CUDA, which allows the attacker to maximize the mining gains from the host.

In this attack, the attackers abused the access to the Kubeflow centralized dashboard in order to create a new pipeline. Kubeflow Pipelines is a platform for deploying ML pipelines, based on Argo Workflow. Pipeline is a series of steps, each one of them is an independent container, and together they form a ML workflow. The image of the container that run in each step is determine in the pipeline configuration. 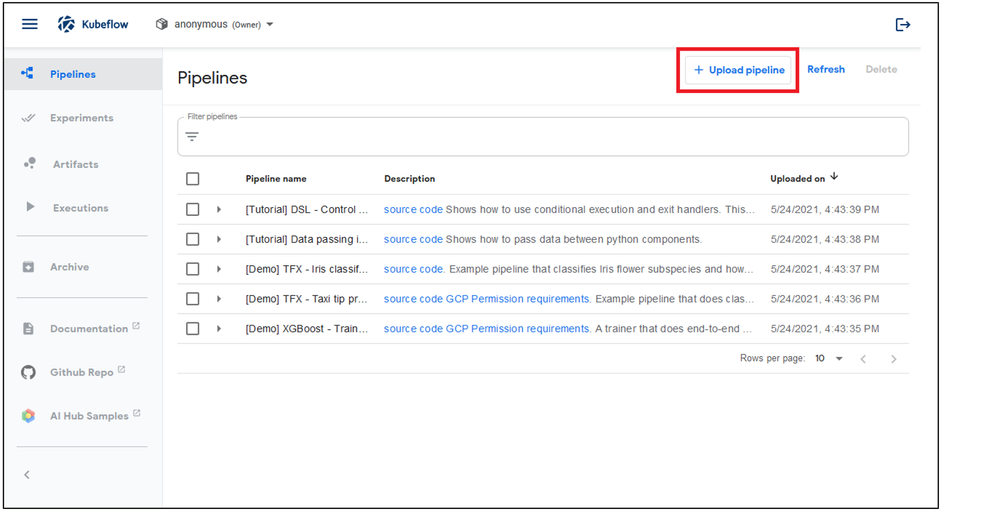 If attackers have access to the pipelines UI, they can create a new pipeline in the cluster. In this case, the containers run TensorFlow images which perform cryptocurrentcy mining tasks.

The names of the malicious pods are all with the same pattern:
“sequential-pipeline-{random pattern}”.

This name is originated in the “generateName” field of the Argo Workflow object that is used for creating the pipeline.

On each cluster, at least two pods were deployed: one for CPU mining, and the other for GPU mining. Both containers used open-source miners from GitHub: Ethminer in case of the GPU container and XMRIG in case of the CPU one:

As part of the attacking flow, the attackers also deployed reconnaissance container that queries information about the environment such as GPU and CPU information, as preparation for the mining activity. This also ran from a TensorFlow container.

The attack is still active, and new Kubernetes clusters that run Kubeflow get compromised.

What should I do?

How Microsoft Defender for Kubernetes can help?