A common tactic we observe used by adversaries against customers running Linux Virtual Machines (VMs) in Azure is password-based attacks. This article will explain how to help protect Linux VMs in Azure from these types of attacks at every step of the deployment pipeline. 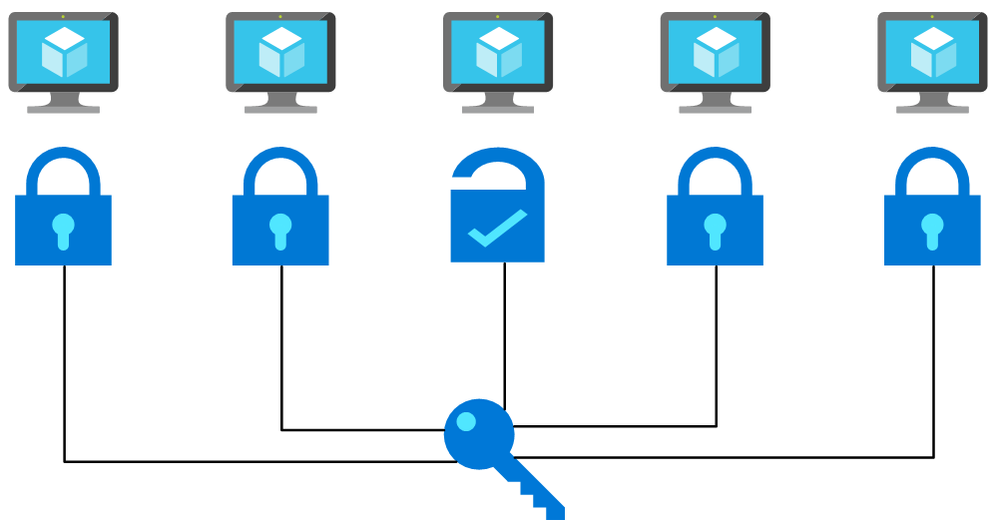 Flow chart picturing a password being used on multiple machines and working with one. This is a simplified depiction of a password spray attack.

Many tools exist that are commonly used to brute force user account passwords over SSH, including those used in cases of Linux brute force compromise in Azure. A specific example is password spray attacks, where an attacker uses one or a few passwords against multiple well-known user accounts in an environment. These attacks typically attempt common passwords hoping one or more accounts can be compromised across multiple virtual machines. Attackers limit the number of password guess attempts to avoid account lockout and detection by defenders.

On Linux, authentication via SSH can be password-less, using SSH key-based authentication instead. SSH keys, are non-human generated, inherently unique, and significantly harder to be brute forced or guessed.

Below, we will show you how to use SSH key-based authentication pre-deployment, enforce it during deployment, and detect non-compliance post-deployment.

In Azure, there are a few methods for creating Linux VMs: via the Azure Portal, Azure CLI, Powershell, or Azure Resource Manager (ARM) Templates. All have the ability (and document how) to deploy a Linux VM with SSH key as a default option for authentication. To update an ARM template that uses password authentication to instead use SSH keys, follow the below steps.

How to transform your ARM template to use SSH key

Replace the admin password parameter with the 'adminSSHKey' parameter

Next, add the ‘linuxConfiguration’ property to the variables of the template

Now that the template is updated to use SSH key authentication, generate a SSH key using the following command

Check out this documentation for more information about generating SSH keys on Windows.

Pass the public key of the SSH key as the value for the ‘adminSSHKey’ parameter described above. Now all VMs deployed using these transformed ARM templates will be safer from password-based attacks.

You can find many examples of ARM templates that deploy VMs with SSH key-based authentication online. When searching for ARM Template examples for Linux VMs, one of the top results is the Azure Quickstart GitHub Repo. These templates are used as starting points for deployments by many individuals. Almost 200 templates in this 800-template repo, deploy a VM or VMSS and previously had SSH authentication configured as password only, making VMs deployed with these templates vulnerable to password-based attacks. We updated these sample templates to disable password-based authentication by default, adding SSH key as the default option.

As part of Microsoft’s quest to get rid of passwords, we have published an Azure Policy which helps ensure Azure Linux VMs use SSH key authentication instead of passwords. You can deploy this policy to your subscription or management group to prevent creation of Linux VMs with password as the SSH authentication type. As seen below, this policy blocks the deployment if the ‘disablePasswordAuthentication’ property in a VM is not defined or is set to ‘false’ when the VM image publisher and offer are well-known Linux offerings. After deploying this policy, any new deployments which include a Linux VM with password-based authentication fail.

The policy can also be found in the virtual machine resource under the Policies blade. This can be useful for understanding the Compliance state, Compliance reason, and Last evaluated time. The figure below shows a Non-compliant machine using password authentication:

ASC Linux SSH Policy - Screenshot of the Azure Portal showing the Compliance information for the ASC recommendation. This example shows a VM as non-complaint for this recommendation.

To remediate this recommendation, you must add an SSH key to the non-compliant VM and disable password authentication by following the below steps.

An alternative to SSH keys is using Azure Active Directory (Azure AD) authentication. This allows for the use of Azure AD credentials to log in to Azure Linux VMs; this feature is currently in public preview.

Password-based attacks on Azure Linux VMs is an active problem, but solutions are available to help protect against these attacks. We’ve demonstrated how to fix ARM templates to use SSH Key instead of passwords, how to deploy a security gate using Azure Policy which disallows Linux VMs that use passwords, and how to detect and remediate existing VMs that have password authentication enabled. Together, these recommendations provide a solid defense against password-based attacks on Azure Linux VMs. Take action and do all you can to be as secure as possible!

*The policy does not impact the Defender for Cloud Secure Score during public preview. Secure Score will only be impacted when the policy becomes Generally Available (GA).