In the current Cloud Computing era, identity has become the new security perimeter, and adversaries have managed several new tactics and techniques to exploit user identities and eventually compromise them. Once an account is compromised either by its credential password or by its authentication token, it can be used for many malicious additional activities that will allow the intruder to escalate the privileges, moving laterally, etc.

Open-source tools such as MicroBurst or PowerZure, developed for research objectives, are also used maliciously simply by weaponize them. These tools allow a malicious actor to assess and exploit resources within Microsoft cloud platforms by leveraging a compromised Azure Active Directory account and/or its token.

This management layer is crucial; therefore, it is important to protect it. Microsoft Defender for Resource Manager protects against potential attacks including the use of exploitation tools like MicroBurst or PowerZure which will leverage compromised account and their tokens to authenticate and exploit the environment for privilege escalation, lateral movement, persistence, and more. Read more about the Microsoft Defender for Resource Manager here.

The authentication bearer token is an access token that contains claims that you can use in Azure Active Directory to identify the granted permissions to your API. Once an attack is detected by Defender for Resource Manager, if an Azure Active Directory (Azure AD) Account has been utilized, you will need to act promptly and mitigate the compromised account. Of course, you can do it manually, but automated response will ensure that the proper mitigation is indeed applied. Here you can find the documentation on how to obtain the Azure AD tokens.

The following is the diagram of the Logic App automation flow: 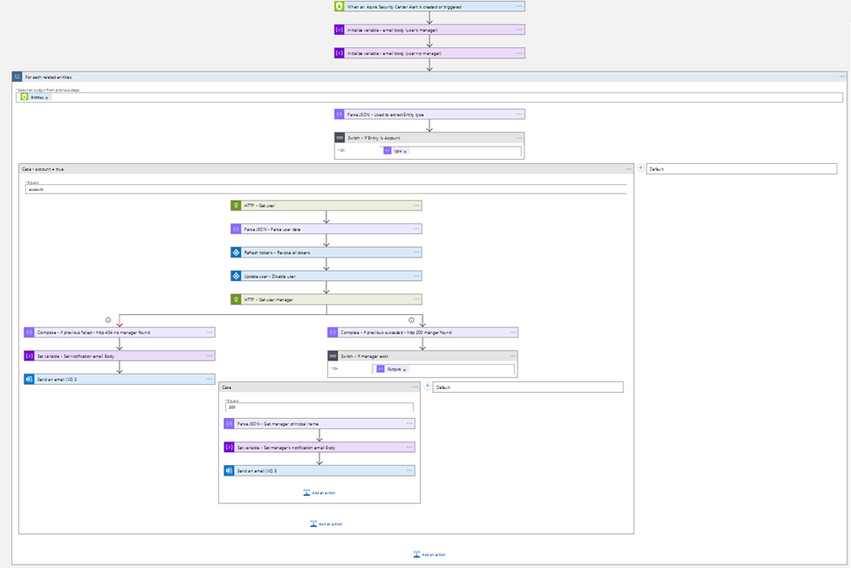 The first step is a trigger that connects to Microsoft Defender for Cloud and retrieves the Alert and all its related objects and metadata.

If an Account is attached to the Alert as Related Entities, then the user is immediately disabled and all its tokens are revoked, therefore the account cannot be used further during the attack, even if a token has been used instead if its credential username and password.

Once the account is disabled, a notification email is draft and sent to the account’s manager if exists. In the case the account has no manager registered under its properties, then the notification is sent to an alternative email address configured at the beginning of the Logic App deployment. This account could be changed afterward by editing the Logic App.

Here is a snapshot of the notification email: 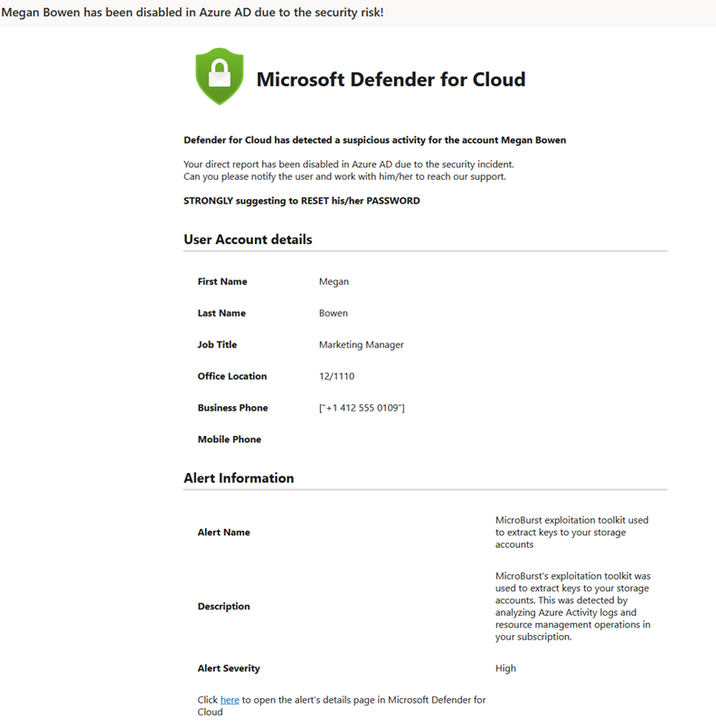 To import and deploy the Logic App you can use the link for the GitHub repo at the end of this blog.

Once deployed you will need to apply the following additional configuration manually:

This logic app as well as many other can be found here:

When an account is compromised time is the essence. You must act quick to remediate the breach. This automated workflow allows to act almost immediately, secure the account, and stop the attack.