Turn on suggestions
Auto-suggest helps you quickly narrow down your search results by suggesting possible matches as you type.
Showing results for
Show  only  | Search instead for
Did you mean:
Support Tip: How User Device Affinity works in Intune
By

If you’ve worked with System Center Configuration Manager in the past, you’ll be familiar with the term “User Device Affinity”. In Intune we call this “Primary User” and it’s simply a mapping between an Intune device and a user. A device can have just one Primary User, but a User can have more than one device.

The point of having this relationship is to improve experiences for both end users and IT support. Here’s a few examples where this mapping is useful:

As an Intune IT admin, you can view the Primary User of a device by going to the device overview page in the admin portal.

What happens when the device doesn’t belong to anyone?
While most of the devices being managed by Intune today are single-user devices, there are some customer scenarios where this isn’t the case. For example, you might have Kiosks, First-line worker devices or Windows 10 PC’s being used by multiple users in a classroom or call center. We call those shared devices. These devices typically have a different set of end-users and self-service based requirements in the Company Portal. 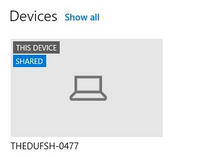 Moving forward, and based on many customer requests, you’ll start to see improvements in the shared device scenario.

For more detailed information on how to configure and use the Intune Primary User, we’ve posted updates to the documentation page here: https://aka.ms/primary_user_intune.