This article steps through high-level features and benefits of TSM, discusses its three components, and provides a quick tour of the models used in two different environments: a proof-of-concept smart campus for Microsoft's own corporate headquarters, and the Contoso Wind Farm demo environment.

Azure TSI Time Series Model consists of hierarchies, instances, and types. These components are defined below
Creating a Time Series Model is not a prerequisite to ingesting data into TSI. If data flows into your environment without a Time Series Model configured, events will be listed under the default Unassigned hierarchy with the default type, ready to be modeled. We recommend setting your hierarchies and types first so their IDs are available when you begin editing your instances.
Two quick tours
Let’s take a quick tour of two different Time Series Models and see how they make it easy to explore IoT data. First, we’ll go through Microsoft’s own Smart Campus proof-of-concept and then move to the Contoso Wind Farm Demo.
Smart Campus
We ran a proof-of-concept using Azure Time Series Insights Preview to ingest and store heating, ventilation, and air conditioning (HVAC) data from two of our main campus buildings—building 121 and building 19.
From Azure Time Series Preview explorer, we can conveniently look at the model from two views. The first (Fig. 1), displays the data from an equipment-centric perspective. You can see the power meter listed as a child under Building 121. The second hierarchy (Fig. 2), displays the data from a physical topology perspective. You can see floor level 1, level 2, etc. listed as children of Building 121. 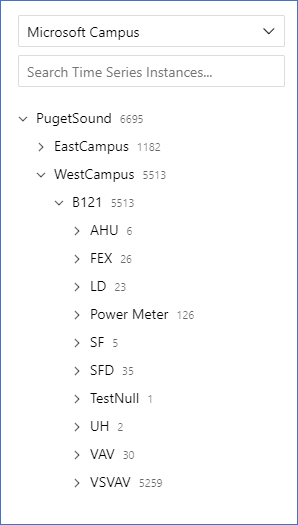 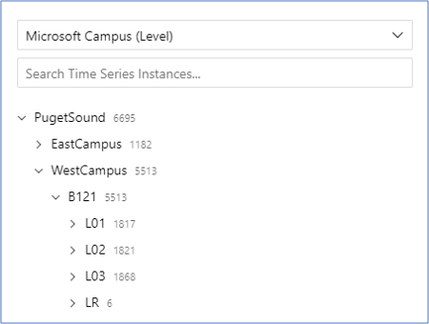 We can drill down on an instance in the equipment view. Remember that an instance is a virtual representation of the time series. In Fig. 3 below, we are looking at the DMPR _CMD, the value of the sensor on a damper in level 1 of building 121.

Figure 3 Exploring Instance Device_1210110_AV_9 After receiving an alert, an operator might come to the Azure Time Series Insights Preview explorer to get more data. For example, a damper “stuck closed fault” would go off if this damper is commanded open, but the sensor value indicates that it’s closed. This could indicate an obstruction of the damper, or a faulty motor. An operator might come to the explorer to get a visual of how long this has been an issue and to understand if this unit has experienced problems in the past. He or she could also use the level hierarchy to compare damper positions in other rooms to see if this is anomalous. 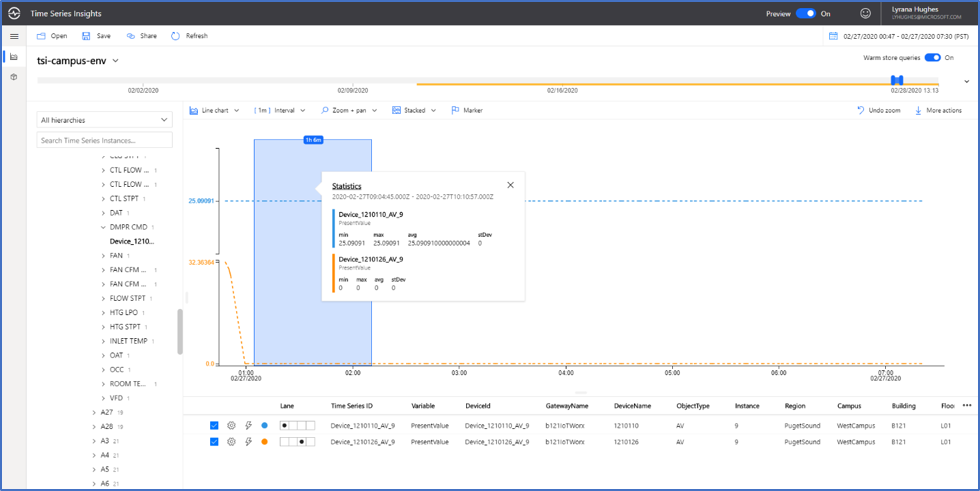 Figure 4 Comparing damper positions on different units
We can switch to model view by clicking on the three-dimensional box on the left side of the user interface. From here, we use the Azure Time Series Preview Explorer to look at the instance Device_1210101_A1_10. In Fig. 5 below, we see the hierarchies it’s associated with, its type, as well as its name fields and values.

Figure 5 Device_1210110_AV_9 instance field names and values
Clicking on the pencil, we can view the underlying instance definition in Fig. 6. We can edit as needed from this interface.

Figure 6 Instance definition Notice that we can also view the underlying JSON code by clicking on “View JSON.” See Fig. 7 below. 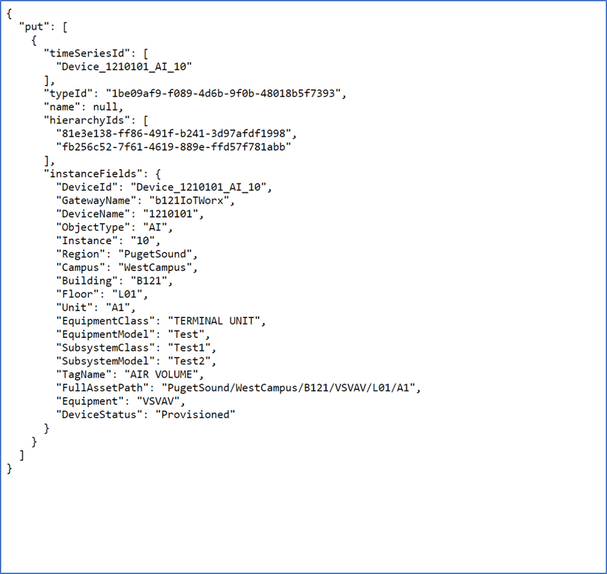 In the explorer we also have the option to bulk-edit instances. This enables associating hundreds of instances a new hierarchy or updating the type in one action.

Figure 8 Bulk editing instances
Back up at the top, we click on Type to view types within the Model view. See Fig. 8 below. We have one type with five variables. Types can have many variables that specify formula and computation rules on events. Each variable can be one of three kinds: numeric, categorical, or aggregate.

Figure 9 View a Type within the Model
Time Series Insights Preview query expression language (TSX) is used to author the variable expression. Various aggregate, scalar, logarithmic and string functions are supported. Stepping away from the campus example, let’s look at the variable expressions used in a Time Series Insights Preview environment set up for a fleet tracking solution. In this environment, both horsepower and fuel consumption are being computed on the fly at query time and can be visualized in the explorer as a derived time series. The image below shows these two type variables’ TSX in their JSON definition.

Figure 10 JSON Code   Contoso Wind Farm
The Contoso Wind Farm demo environment is available for you to explore. When you open the explorer, you’ll find three time series charted—OutdoorTemperature, ActivePower, and GearboxOilLevel for Contoso Plant 1, Unit W6. You can expand Plant 1 and Unit W6 and then expand Weather System, Generator System, and Gearbox System to see how these time series were modeled and their associated peers. By navigating the model, we can easily make a comparison with Plant 2. Click to expand Plant 2 > Unit W6 > Generator System > Active Power, select the time series GUID and click Show Value 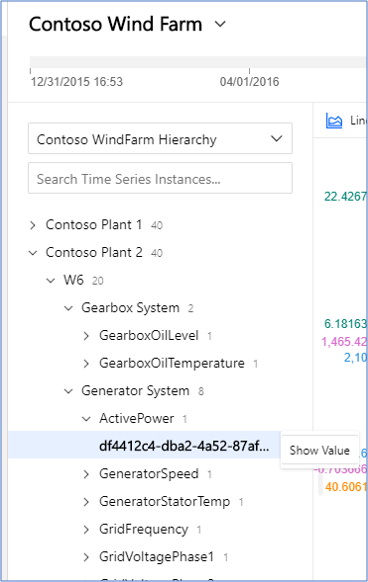 Figure 11 Contoso Wind Farm Model
Once the time series is charted, change its Lane to Lane 2 so that it’s stacked on top of the equivalent unit in Plant 1: 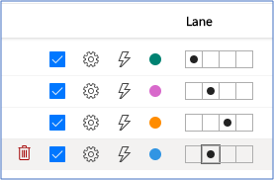